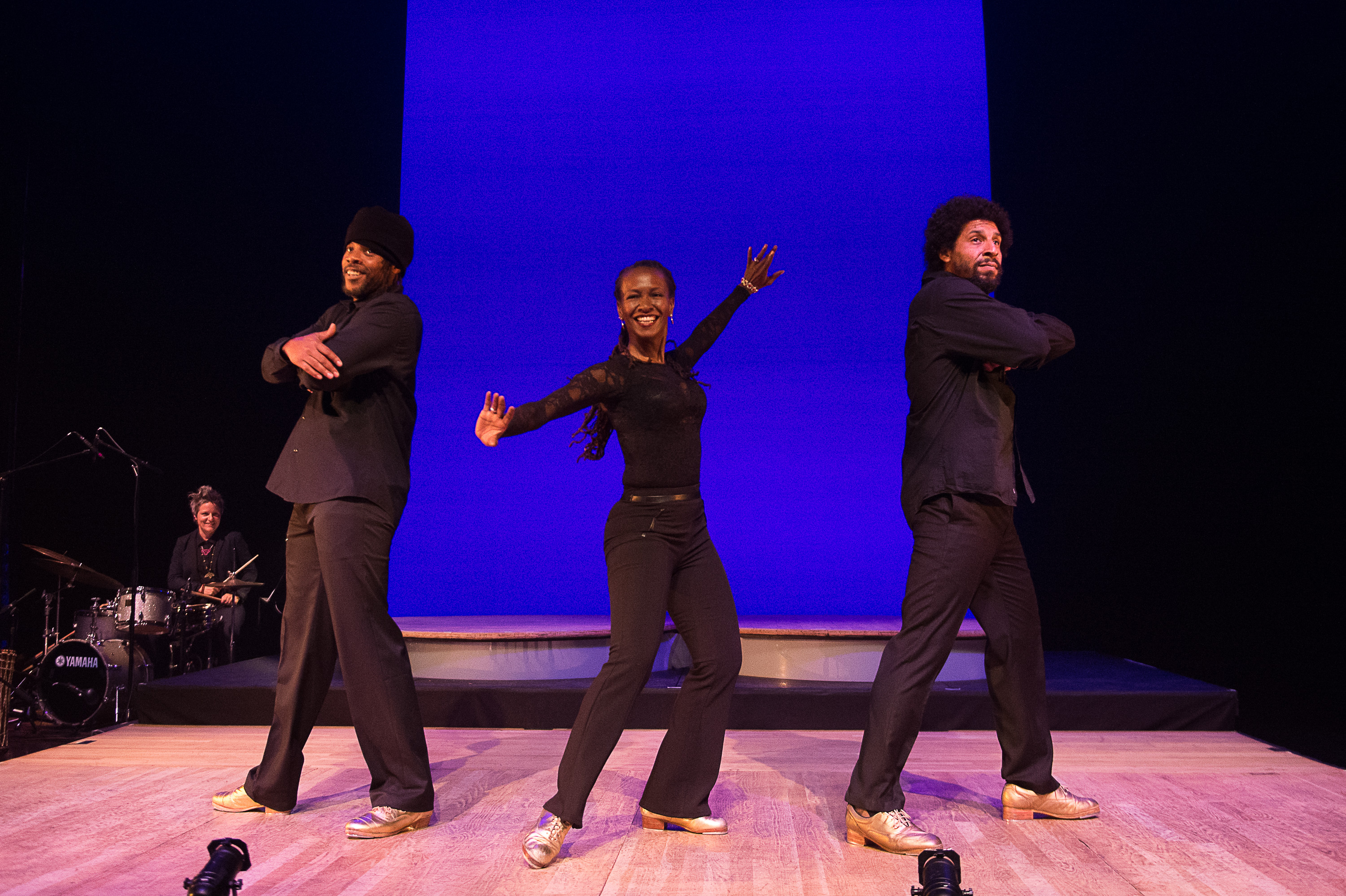 June 8, 2021 (BECKET, Mass.)—Jacob’s Pillow announces Dormeshia as the recipient of the 2021 Jacob’s Pillow Dance Award. The Award, presented each year to an artist of exceptional vision and achievement, carries a cash prize of $25,000 which the artist can use in any way they wish. Dormeshia is a dynamic tap dancer, choreographer, and instructor who has been lauded as the best of her generation, both by her peers and esteemed dance critics. Her performances have appeared on the Broadway stage, in films, and in choreography for artists including Savion Glover and Gregory Hines. Dormeshia will be honored at Global Pillow: A Virtual Gala, which will be streamed free online on June 12 at 7 p.m. ET.

“Dormeshia is quite simply one of the greatest tap dancers of our time,” said Jacob’s Pillow Artistic & Executive Director Pamela Tatge. “She began by dancing with the greats when she was quite young and emerged with dazzling skill and artistry that is all her own. Dormeshia has made singular contributions to the tap world as performer, choreographer, collaborator, educator and mentor. She is a radiant human being whose elegance, flair and generosity of spirit draws us to new heights of what’s possible in the tap form. It is an honor to present her with the Jacob’s Pillow Dance Award.”

“Thank you, Pam, and everyone at the Pillow for selecting me to be the recipient of the Jacob’s Pillow Dance Award,” Dormeshia said. “You’ve been watching and supporting my career for 28 years, so I just want to say thank you for creating opportunities for me and other Tap dancers to continue to learn and grow, as artists and people. Thank you for hearing and seeing me when I didn’t think you were paying me any attention.”

At the season-opening Global Pillow gala on June 12, Dormeshia will present a piece, which was filmed at Mount Vernon Performing & Visual Arts Magnet School with live piano accompaniment.

“Among tap dancers, [Dormeshia] has long been known as a master, commonly described as the greatest,” wrote Brian Seibert of the New York Times. “In the words of Michelle Dorrance, the most acclaimed tap dancer of recent years, ‘the rest of us sit at her feet.’”

“To me, she’s the greatest tap dancer/hoofer alive right now,” Jason Samuels Smith told Dance Magazine. “She’s on top in terms of her all-around versatility and her wealth of knowledge and experience with the masters of tap.”

Dormeshia originally hails from Inglewood, California, and has been tap dancing since she was three, learning from her teachers and mentors Paul and Arlene Kennedy. By age eight, she’d performed in Rome, Italy, in the Tip Tap Festival, and at age 12, she made her Broadway debut in the musical Black and Blue alongside Savion Glover, Lon Chaney, Ralph Brown, and Jimmy Slyde. She’s also performed in the Broadway show and international tour of the Tony Award-winning musical Bring in Da’Noise, Bring in Da’Funk.

Over the course of her career, Dormeshia has achieved international recognition and has won two Bessie Awards as a performer and choreographer. Dormeshia has also received a Princess Grace Dance Fellowship and is a Statue Award winner. As an instructor, Dormeshia has taught in several tap festivals, in dance schools and other venues across the globe. Dormeshia has also collaborated with Jason Samuels Smith and Derick K. Grant for annual productions of Tap Family Reunion, celebrating National Tap Dance Day, which coincides with Bill “Bojangles” Robinson’s birthday on May 25.

Dormeshia was Michael Jackson’s tap coach for 11 years; her choreography was also featured in Jackson’s music video for “Rock Your World.” Her film credits include Spike Lee’s “Bamboozled,” “TAP” with Gregory Hines, “The Rise and Fall of Miss Thang,” and “The Rodger and Hart Story: Thou Swell, Thou Witty.” Dormeshia has also graced the cover of Dance Magazine.

ABOUT THE JACOB’S PILLOW DANCE AWARD

The Jacob’s Pillow Dance Award was created in 2007 by an anonymous donor whose commitment to an ongoing annual gift to Jacob’s Pillow of $50,000 is generous and far-reaching. The Award, presented each year to an artist of exceptional vision and achievement, carries a cash prize of $25,000 which the artist can use in any way they wish. Past honorees include Annabelle Lopez Ochoa, Faye Driscoll, Liz Lerman, Camille A. Brown, Kyle Abraham, and Michelle Dorrance.

The remaining $25,000 supports the Pillow’s commitment to the research and development of new work in the recently launched Pillow Lab. Year-round residencies at the Pillow Lab offer free housing, unlimited use of studio space, and access to the Pillow’s rare and extensive Archives and resources, in the beautiful retreat-like atmosphere in Western Massachusetts. In commemoration, the honoree also receives a custom-designed glass award sculpture by Berkshire-based artist Tom Patti, whose work is in the collections of the Metropolitan Museum and other major arts institutions around the world.

Dormeshia was just 17 during her first appearance at Jacob’s Pillow, in 1993, as an apprentice-turned-member of the Los Angeles-based Jazz Tap Ensemble. Dormeshia has performed at the Pillow with Dorrance Dance several times, most notably in The Blues Project in 2013 and 2015. In 2016, she created And Still You Must Swing with fellow tap soloists Jason Samuels Smith and Derick K. Grant, and featured 2016 Jacob’s Pillow Dance Award winner Camille A. Brown, in a piece exploring the connections between rhythm tap, swing and other dance forms. And Still You Must Swing was recognized by the New York Times’ Best of Dance 2016. Since 2017, Dormeshia has been a Co-Director of The School at Jacob’s Pillow’s Tap Dance Program, where she plays a key role in the mentoring of the next generation of tap dance artists.

Dormeshia, Jason Samuels Smith, and Derick K. Grant in And Still You Must Swing from 2016: https://danceinteractive.jacobspillow.org/dormeshia-sumbry-edwards-jason-samuels-smith-derick-k-grant/still-must-swing/

Dormeshia and Dorrance Dance in The Blues Project from 2015: https://danceinteractive.jacobspillow.org/dorrance-dance/blues-project/

Dormeshia and Dorrance Dance in The Blues Project from 2013: https://danceinteractive.jacobspillow.org/dorrance-dance/the-blues-project/

Jacob’s Pillow, founded by Ted Shawn in 1933 on the traditional lands of the Agawam, the Nipmuc, the Pocumtuc, and the Mohican, is a National Historic Landmark, recipient of the National Medal of Arts, and home to America’s longest-running and largest international dance festival. Each summer Festival typically features leading national and international dance companies across genres as well as free and ticketed performances, talks, tours, classes, exhibits, events, and community programs. In 2021, the Pillow will offer its first multi-platform Festival, with onsite, in-person events and performances as well as robust virtual programming. The Pillow Lab, a year-round residency program, supports dancers and choreographers in research and development of new work.

On March 2, 2011, President Barack Obama honored Jacob’s Pillow with a National Medal of Arts, the highest arts award given by the United States Government, making the Pillow the first dance presenting organization to receive this prestigious award. The Pillow’s Executive & Artistic Director since 2016 is Pamela Tatge. For more information, visit www.jacobspillow.org.