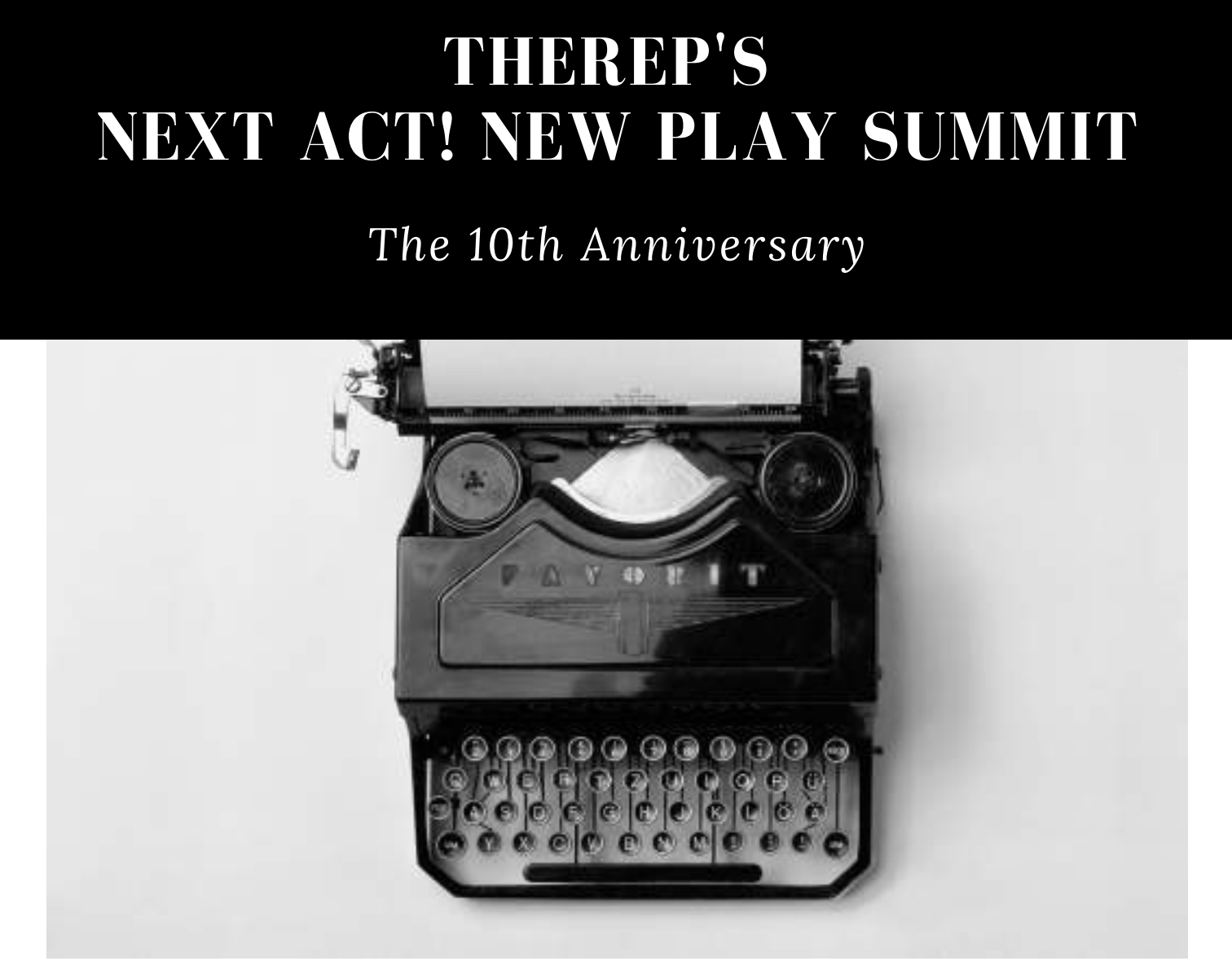 Albany, NY – May 28, 2021 – Capital Repertory Theatre (theREP) announces virtual line-up for the Tenth Anniversary of the theatre’s annual showcase of new works in NEXT ACT!

Join us – virtually – June 7-11, 2021, for the first of two weeks of content to celebrate the tenth annual NEXT ACT! New Play Summit! The second week of content will take place in September 2021.

The Anniversary Summit will feature readings of three full length plays and a special “Second Look” at Meridith Friedman and her wonderful characters in The Luckiest People Trilogy. The two-week summit will also include the popular First 15 Event, a Synopsis Clinic led by Dramatist Guild Member Aoise Stratford, two events featuring Young Playwrights and the second ever Stage2Screen Event (curated with Ben Katagiri, and local production companies Poorductions and Frosted Lens Entertainment).

Jenny Stafford’s SECRET HOUR, Makasha Copeland’s EXTREME HOME MAKEOVER and Kareem Fahmy’s AMERICAN FAST were all named winners in the summits first ever Three-Way Tie – with the first being read in June and the other two receiving their readings in September (exact dates TBA).

NEXT ACT, which is a joint venture between theREP and Proctors, seeks to highlight new works that use theatre to address injustices, inequities, and cultural collisions, providing a voice for the unheard on stage, in the workplace, the Capital Region and beyond. Scripts focus on pieces that engage art and social justice. To date, the summit has brought more than 300 theatre professionals (including playwrights, actors and directors) and 4,000+ audience members together for a series of workshops, readings and discussion.

After an intense reading process, spanning several months, gathering input from theatre professionals in the Capital Region and NYC, the field of submissions was narrowed down to a top-8. Producing Artistic Director, Maggie Mancinelli-Cahill and Assistant Artistic Director, Margaret E. Hall then took the reading committee’s input, along with their own, to make the ultimate decision on which pieces would be receiving further development in this year’s Summit.

So, what does the Summit have in store for audiences this year?

As an ode to the Summit’s 10th Anniversary, theREP is bringing back Meridith Friedman and her full trilogy: THE LUCKIEST PEOPLE TRILOGY (a trilogy that was commissioned by Curious Theatre Company). The first and second plays in the trilogy, THE LUCKIEST PEOPLE and YOUR BEST ONE, have both had readings in past NEXT ACT! Summits, and audiences will remember that theREP produced the East Coast Premiere of YOUR BEST ONE in January of 2020.

Friedman is an exciting writer who theREP has thoroughly enjoyed working with. She is the recipient of a Dramatist Guild Writers Alliance Grant and a former Dramatist Guild fellow. She is also a National New Play Network affiliated artist and has participated in numerous NNPN programs and initiatives including the Playwright-in-Residence program, Rolling World Premieres, MFA Playwright’s workshop, Collaboration Fund, Commissions Program, and the National Showcase of New Plays.

Richard and David have it all: wonderful family, great jobs, a great Manhattan apartment and a great relationship. The natural next step is to start their family by adopting a child, right? But what happens when one partner begins to panic and their fear of commitment rears its ugly head? See the full story unfold in The Luckiest People Trilogy from 5pm June 7th through 10pm June 10th. All three plays (The Luckiest People, Your Best One and I Can Go, will be available to stream starting at 5pm on June 7th through 10pm June 10th).

Married couple Kate and Ben have a difficult time communicating about difficult topics so they’ve come up with a game – “secret hour” – in which they must tell each other the truth, no matter what. When, as it is inevitable, the lies each character is holding onto finally come to light, Ben and Kate must wrestle with whether or not their truths make them incompatible. Together they end up faced with the question Kate poses to her the students in her college ethics course – “is your greatest ethical responsibility to yourself, or others?” (Secret Hour, will be available to stream starting at 7pm on June 9th through 10pm June 11th).

Stafford is new to the Summit and theREP this year. Jenny Stafford is an award-winning bookwriter, lyricist, and playwright whose works have been heard on Broadway, regionally, and internationally. Awards include the 2017 Reva Shiner Comedy Award, a 2021 ASCAP Plus Award, and the Paulette Goddard Award. Nominations for the Spirit of the Online Fringe Award and the Fringe Review Hidden Gem Award in Edinburgh. Finalist status for the Kleban Prize for Musical Theatre (2018 and 2021), the Yale Institute for Music Theatre, the Eugene O’Neill Musical Theatre Conference, the National Alliance for Musical Theatre Conference and the Ronald M. Ruble New Play Competition.

The summits New Voices: Young Playwright Contest Reading features readings of the four plays named winners from theREP’s 2021 Young Playwright Contest; 10-minute plays written by young playwrights – all of whom are from the greater Capital Region, and all in Middle or High School. 2021 Winning scripts: Dream Escape by Leanne Airhienbuwa & Amita Ganeshkumar (Guilderland High School), The Flower by Seamus Madden (Loudonville Christian School), Broken Glass by Isabella Libby & Maxine Alpart (Guilderland High School) and Oh My God! by Meghan Cenci & Merryn Rositzke (Coxsackie-Athens High School). These four plays, along with two others from the 2020 Contest, will see their play fully produced on theREP’s stage, performed by the Summer Stage Young Acting Company later in the summer. (NEW VOICES, will be available to stream starting at 5pm on June 11th through 10pm June 12th).

The First 15: Be a Literary Manager features excerpts from 4 scripts that did not quite make the final cut. This year’s plays: Sanchoco by Christin Eve Cato, Las Pajaritas by Jordan Ramirez Puckett, Apartness by Michael Hilton and Seeing Violet by Peter Snoad. (First 15, will be available to stream starting at 5pm on June 10th through 10pm June 11th).

Stage2Screen features Mark Rigney’s work, EVERYTHING MUST GO. The event has been created to show audiences – and playwrights – other avenues their writing may travel down after it’s been submitted to theREP, that being a path towards film. This reading features the first 20pages from the Stage Play and the first 20pages from the Screenplay of EVERYTHING MUST GO, which Mark and Ben (and the two production companies previously mentioned) have been working on for some time now. (Stage2Screen, will be available to stream starting at 7pm on June 10th through 10pm June 11th).

The Next Act! New Play Summit 10 is made possible in part by a legacy gift from Samson O.A. Ullmann, professor of English at Union College, 1957-1992

The entire Summit is virtual and a fundraiser for the Theatre’s New Play Development.

Suggested donation for each reading is $25.00.

For information on the summit or to make a donation visit the website at www.capitalrep.org.

Makasha Copeland (playwright of EXTREME HOME MAKEOVER) is a playwright, actor, and comedian from the Texas Hill Country. Their full-length plays Extreme Home Makeover and Fabuloso! have been developed and produced with San Diego REP, Vertigo Productions, the Agnes Nixon Festival, Theatre Lab at FAU, Teatro Espejo, and Sideshow Theatre (upcoming). They are currently working on their splits for their next project, STDYCD: So The Dance, a co-created dance-first, comedy-second spectacle. They graduated from Northwestern University with a degree in Theatre and Latine Studies.

Extreme Home Makeover: Every year, thousands of families apply for a reality TV show that promises a rags-to-riches transformation for America’s most deserving citizens. With such steep competition, the Vega family must fight to make their video application stand out. Makasha Copeland’s earnest satire Extreme Home Makeover begs the question – in a world where so many receive so little, how much do miracles cost?

Kareem Fahmy (playwright of AMERICAN FAST) is a Canadian-born playwright and director of Egyptian descent. His plays, which include American Fast, A Distinct Society, The Triumphant, Pareidolia, The In-Between, and an adaptation of the acclaimed Egyptian novel The Yacoubian Building, have been developed or presented at The Atlantic Theater Company, New York Stage & Film, Target Margin Theater, The Lark, Fault Line Theater, and Noor Theater. Kareem has directed a number of world premiere productions and has developed new plays at theaters around the country, including MCC, Ensemble Studio Theatre, New Dramatists, The Civilians, Geva Theatre, Pioneer Theatre, Silk Road Rising, and Berkeley Rep. Kareem is the co-founder of the Middle Eastern American Writers Lab at The Lark and a co-founder of Maia Directors, a consulting group for organizations and artists engaging with stories from the Middle East and beyond. MFA: Columbia University. www.KareemFahmy.com

American Fast: College basketball phenom Khady Salama is about to compete in the NCAA Women’s Championships. But this year’s March Madness coincides with Ramadan, and Khady’s devout mother expects her to fast. No food, no water, no anger, not even on game days. The ambitious Khady sees only one way forward: lie and pretend to follow Ramadan. Little does Khady know her mother will go public with the story of her fast, portraying Khady as a heroine for young Muslim women everywhere. As the championship game draws near, the media spotlight threatens to expose Khady’s deception. Forced to cover her tracks with more lies, Khady gambles with the trust of the people she loves most—her coach, her boyfriend, and her mother—in the name of winning at all costs.

SCHEDULE OF JUNE EVENTS – ALL VIRTUAL