Cast Announced for “Next to Normal” at Fort Salem Theater 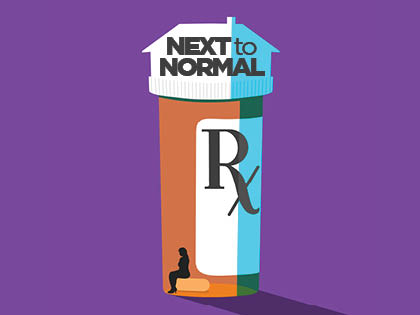 Cast Announced for “Next to Normal” at Fort Salem Theater

SALEM, New York, June 21, 2021 – Fort Salem Theater is excited to announce their 2021 cast and creative team of Next To Normal, opening July 23 and running through August 1. This will be the second musical of the season, following an extended run of The Marvelous Wonderettes, which reopened the theater under new management on June 18 (closing June 27). Limited tickets for Next to Normal are available now at www.FortSalem.com.

Hailed as “brave and breathtaking” by The New York Times, Next to Normal is a contemporary Broadway musical and winner of the Pulitzer Prize for Drama in 2010, becoming only the eighth musical to ever receive the award. Written by Tom Kitt and Brian Yorkey, Next to Normal brings to the stage a typical American family as they cope with loss and the unpredictability of a mother’s deep struggles with mental health. In addition to the show’s Pulitzer Prize, the original New York City production received 11 Tony Award nominations (winning 4), plus numerous accolades from the Drama League Awards, Drama Desk Awards, Outer Critics Circle Awards and The Lucille Lortel Awards.

She appears opposite Sam Luke as Dan, Kallie Ann Tarkleson (Fort Salem Theater’s The Marvelous Wonderettes) as Natalie, Noah Casner as Gabe, Noah Heimbach as Henry, and Marc Christopher as Dr. Madden/Dr. Fine. Fort Salem Theater Executive and Artistic Director Kyle West will direct the musical, with guest artist John Norine Jr. serving as both Music Director and Technical Director. Both creative team members have participated in COVID Compliance Officer training programs to ensure a safe environment for rehearsals and performances. All cast and creative team members are fully vaccinated and will have an increased distance from the audience when singing.

“Reopening the beautiful Fort Salem Theater was a dream come true, and the incredible response we received with The Marvelous Wonderettes has been overwhelming,” Executive and Artistic Director Kyle West stated. “We are thrilled to present a story as inspiring and incredible as Next to Normal for our second offering – and we hope audiences appreciate the contrasting production themes.”

Next to Normal runs Friday, July 23-Sunday August 1. Performances are Fridays and Saturdays at 7:30PM, and Sundays at 2:00PM. All performances are on the Fort Salem Theater mainstage, located at 11 E Broadway, Salem NY 12090. Tickets range from $22-$30 and can be purchased at www.FortSalem.com

Rebecca Paige is a visiting guest artist of Fort Salem Theater who attended The College of Santa Fe as an acting major with a minor in dance and is a graduate of the Booker T. Washington High School for the Performing and Visual Arts. Rebecca lived and performed in New York City for 7 years, working at Radio City Music Hall, co-created a cartoon which was an official selection at the New York Television Festival, was a founding member of a comedy troupe, and starred in several cabarets, including her own one-woman show. She has appeared across the country in The Man of La Mancha (Aldonza), Jekyll & Hyde (Lucy – Column Award Nomination), Oklahoma! (Ado Annie), Evita (Eva Peron – Column Award Nomination), Thoroughly Modern Millie (Miss Dorothy), The Drowsy Chaperone (Janet van de Graaf), Urinetown (Hope Cladwell), Disaster the Musical (Jackie Noelle), and A Man of No Importance (Mrs. Patrick – Column Award Nomination), among others. Ms. Paige has performed with Rubber Road New York, The Triad Theatre Manhattan, Le Comedy de Parkside Queens New York, The Firehouse Theater, Theatre Britain, The Dallas Theater Center, Theatre Arlington, Runway Theatre, The Dallas Children’s Theater, and Uptown Players. As an actor for FUNimation, Inc, she has also done voiceover work for several international TV series and Anime films.

Sam Luke returns to the theatrical stage after a hiatus working as a professional singer, songwriter and guitarist in nightlife venues across New York and Vermont for the past several years. On stage, he has starred in Newsies (Jack Kelly), Damn Yankees (Mr. Applegate), The Wizard of Oz (Tin Man), and High School Musical (Troy Bolton). Sam has also performed as a stand-up comedian. He is a graduate of Cambridge High School and studied writing at SUNY Cortland.

Noah Casner is a recent graduate of NYU’s Tisch School of the Arts, where he studied at the Lee Strasberg Institute and NYU’s Experimental Theatre Wing. A Saratoga Springs native, he’s more than happy to make the trek out to this beautiful little theatre in Salem. Favorite past roles include Spring Awakening (Moritz) at Weathervane Theatre, and Parade (Frankie) at Strasberg Institute.

Kallie Ann Tarkleson is a New York-based actress currently working towards her BFA in musical theatre at Nazareth College. She has appeared on stage all over the Capital Region and Central New York in shows such as RENT: Workshop 360 (Maureen), Wolves (#46), Shrek (Fiona), A Charlie Brown Christmas (Sally Brown), Calvin Berger (Bret – TANYS Award for Excellence in Performance), Grease (Marty), and Seussical (Gertrude McFuzz). She was seen in the collegiate premiere of Chaplin the Musical (Usher) at Nazareth College directed by Valerie Wright. She also worked on the musical workshop of Modern with book and lyrics by Derek Gregor and Selda Sahin. She has directed and choreographed multiple shows for local elementary and middle schools. She was also a vocal/acting coach and counselor for SCC Theatre Kidz!

Noah Heimbach is an alumni of Greenwich High School who has recently completed his training at a conservatory in NYC. He is so excited to be returning to his hometown in Washington County. He has appeared in multiple shows surrounding the Capital District including Godspell, The Music Man, The Little Mermaid (Park Playhouse), Beauty and the Beast, Annie Get Your Gun (SLOC) and Dogfight (Troy Civic).

Marc Christopher is very excited to be making his Fort Salem Theater debut! He recently appeared as Man 2 in the production of I Love You, You’re Perfect, Now Change at Playhouse Stage Company where he has also appeared in many other productions, including Avenue Q (Brian) and Damn Yankees (Mr. VanBuren), just to name a few. He has worked in various theaters and theme parks along the East Coast from Upstate NY to Fort Meyers, Florida. He made his Off Broadway debut as the Creature (Replacement) in Frankenstein at St. Luke’s Theater in NYC. He also performed as Mr. Fezziwig in a musical retelling of A Christmas Carol called Scrooge No More at Busch Gardens. He is a singing server in a new Broadway-themed restaurant in NYC called Gayle’s Broadway Rose. Other notable credits include Guys and Dolls (Big Jule), Spelling Bee (Panch), Singin’ in the Rain (Production Tenor).

Kyle West is the Executive and Artistic Director of Fort Salem Theater, and has directed and choreographed large scale productions across the country, including Evita, White Christmas, Gypsy, Hairspray, Cabaret, Chicago, Fiddler on the Roof, Joseph…Dreamcoat, RENT and many more. For his work, he has received the AriZoni Award, MET Award, Annie Award and BroadwayWorld.com Award, among others.

As an actor, Kyle’s professional credits include Footloose (Ren), West Side Story (Action), Grease (Eugene), Beauty and the Beast (LeFou), Godspell (Judas), and commercials for American Eagle Outfitters, Sony, American Airlines, the current marketing campaign for Broadway’s Dear Evan Hansen, as well as All My Children (circa 2004).

John has been active as a music director and conductor across Texas since 2005 – working at the community, educational, and professional levels and music directing over 75 shows during that time. Originally from Utica, NY, John is a graduate of Thomas R. Proctor High School and SUNY Potsdam/The Crane School of Music, where he studied music theory. He then moved to Dallas, where he graduated from the University of North Texas with a Master’s  in Music and Doctor of Musical Arts degree,  studying Orchestral Conducting under Anshel Brusilow and Clay  Couturiaux.

In addition to his musical direction activities, John has been active as an orchestrator and arranger. Between 2002 and 2008, he worked with the Lost Composers Collection at the University of North Texas, a special musical collection of the University that specialized in lost works of Jewish composers between 1930 and the end of the Second World War. He completed a new orchestration of Paul  Kletzki’s Piano Concerto, Op. 21 (recorded by pianist Joseph Banowetz and the Moscow Philharmonic) for release on the Naxos label; the recording was nominated for a Grammy Award in 2010 (Best Instrumental Soloist with  Orchestra).