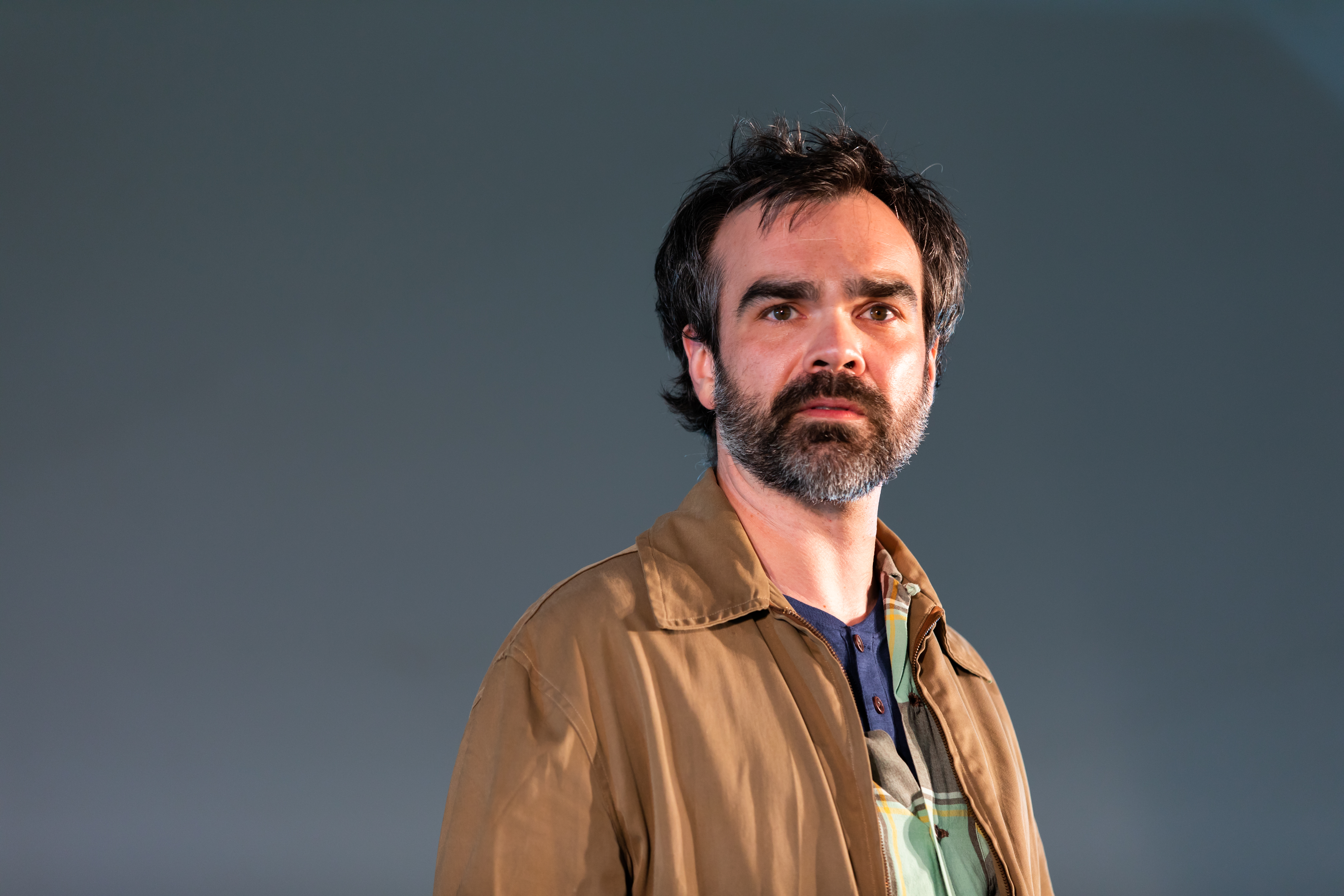 Title and Deed by Will Eno is an intriguing play produced by Chester Theatre Company at the Hancock Shaker Village in Pittsfield, Massachusetts.  The playwright is a major contributor to off-Broadway’s dynamic and experimental theatre philosophy as opposed to Broadway’s “sure-hit” crowd pleasers, though he has had one play, The Realistic Joneses, that transferred to Broadway from the Yale Repertory Theatre.  Title and Deed is enjoying a provocative solo performance by James Barry for a 70-minute exploration of time and space that will resonate after the performance.  Leave it to Chester to present a play that will challenge and move its audience.  Isn’t that what the theatre should be?

A character identified as “Man” in the program enters carrying a small satchel; he peers at the audience and the minimal surroundings on the stage.  One can tell from his movements and facial expression that he likely is suffering some type of mental aberration.  There is a vapid innocence in his eyes as he communicates with the audience sometimes addressing individual members.

He states that he is something of a stranger in a strange land.  Slowly he reveals elements of his life including the town he lived in though he implies that it is on another planet as he hopes to create a universally shared feeling with and among the audience. He refers to the conflicts with his parents and of the woman, Lisa, who walked away from him after saying, “Don’t get lost for too long.” This is also the last line of the play and defines his life story and playwright Eno’s intention.

The script is rife with epigrams about building bridges to people and communities as opposed to alienation.  Often he expresses his feelings in convoluted mixed metaphors which seem to make perfect sense in a guilless way.  At one point he tells us, “…I make bread for anyone who asks.”  He comments on the acceptance of rituals. Occasionally he’ll ask a question and then gives us a moment to determine our individual place in the universe.  The title of the play could refer to the need for an identity and a home.

In the hands of a lesser actor this could be a maudlin or a disjointed   presentation, but Mr. Barry and director Keira Naughton have plumbed the play to crystallize the writer’s observations and themes.

There are many lines that Mr. Barry delivers softly but pointedly for throwaway laughs.  He doesn’t try for them, he just lets his simple demeanor touch us to evoke our responses.  Ms. Naughton has wisely restrained him so that he doesn’t telegraph or foreshadow an expected reaction.  Often the character takes long pauses, but we know that there is something going on inside of him that is nourishing his next thought.  Mr. Barry and Ms. Naughton have produced a masterly piece of theatrical art.

It’s important to note that in his curtain speech Chester Theatre Company Producing Artistic Director Daniel Elihu Kramer thanks the administration of Hancock Shaker Village as he tells us that we are sitting on land that once belonged to the Mohican Indian tribe.  They were removed from the area in 1785 and re-formed in their current home in Wisconsin in the 1820’s.  In a way, their history is redolent of Title and Deed.