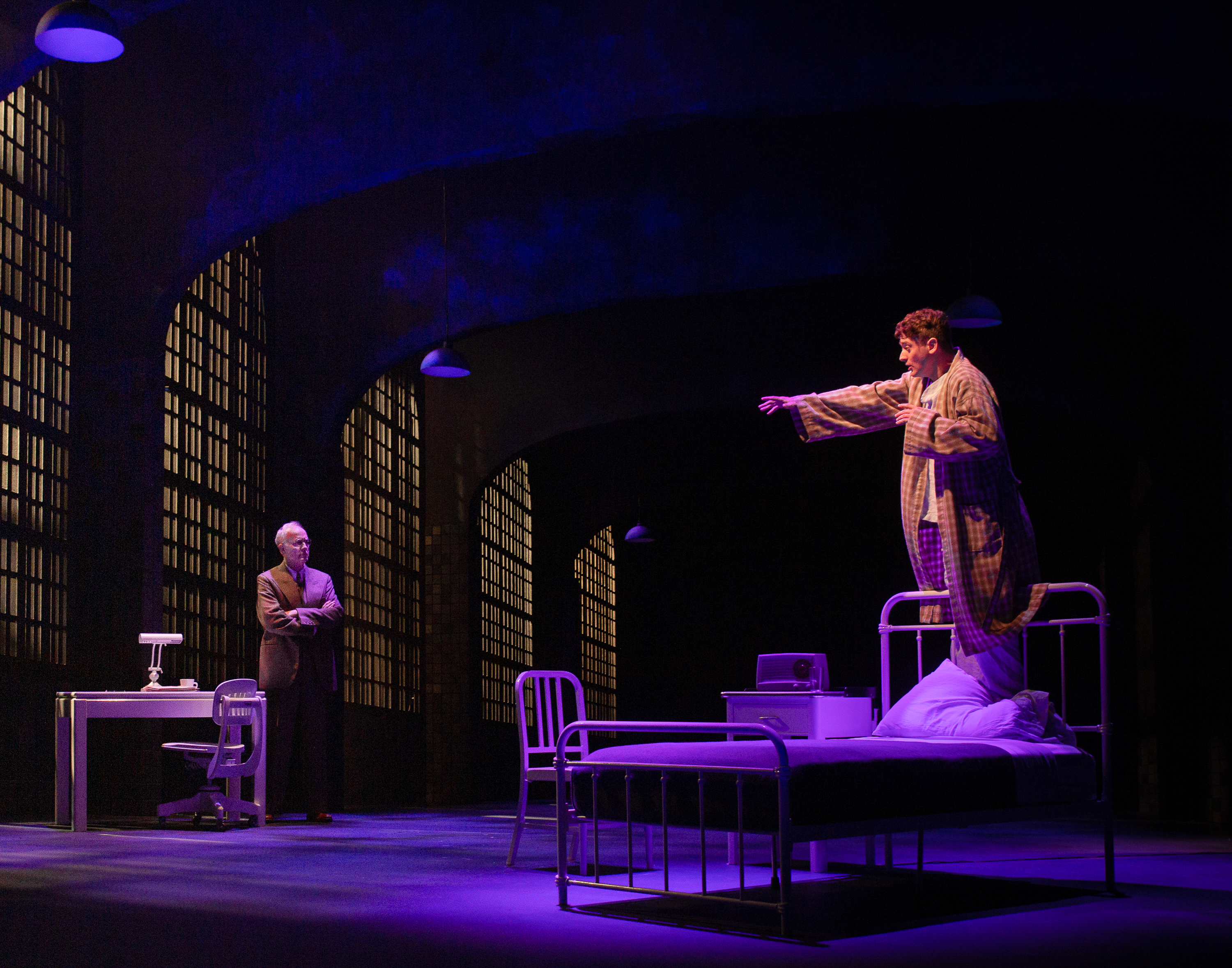 There are times in the theater when all of the elements required to bring a play to life–the script, the director, the actors, the designers–converge so faultlessly that the result seems like sorcery, a very good kind of sorcery.

We find Chester Bailey (Ephraim Birney) in a psychiatric hospital toward the end of World War II. A victim of calamitous injuries, he has been transferred to the psychiatric facility because he believes he is unscathed. The psychiatrist assigned to him, Dr. Philip Cotton (Reed Birney), needs to guide Chester toward accepting reality.

But Dr. Cotton has his own wounds, though they are not physical, and as he treats Chester, his developing understanding of his own reality alters the lives of both men in unexpected ways.

Both actors are superb. The Birneys are, in real life, father and son. They are also very accomplished actors in their own right. (Some may recognize Reed Birney from the television show House of Cards.) Beowulf Boritt’s elegantly minimalist set is bifurcated with Chester’s hospital room on one side and Dr. Cotton’s office on the other. Yet even though the actors deliver monologues as they move along the entire stage, our suspension of disbelief is never disrupted. It’s a gutsy bit of Ron Lagomarsino’s direction that works beautifully, not only because the actors are so good, but because we immediately understand when each man is expressing his inner conflicts or fantasy life, as opposed to when a scene is taking place in real time, as when the psychiatrist and his patient are in session.

Among playwright Joseph Dougherty’s great accomplishments are the balancing act of expressing at turns each character’s inner life and reality, all the while making clear which is which. We understand fully, and Dr. Cotton’s hard-won decision to reverse the way he is treating his patient is as remarkable as it is inevitable.

As with most important dramas, Chester Bailey explores some big ideas about creativity, imagination, and honesty in a neatly wrapped package. It is a privilege to become so enthralled by the evolution of the two men on stage that we leave the theater reassessing our own preconceptions about reality.

Two men of different ages, experience and social class unknowingly discovers themselves in a psychological bond that will nourish and assist them to overcome some of their live’s darkest vagaries.   Chester Bailey at Barrington Stage Company in Pittsfield is a compelling play by Joseph Dougherty with powerful performances by father and son Reed and Ephraim Birney.  One cannot leave the theatre without being emotionally overwhelmed and intellectually challenged.

Chester Bailey is a young man in his mid-20’s in the early 1940’s when World War Two was at its height.  He was convinced by his parents to wait until he was drafted, but his father found him a job at the Brooklyn Navy Yard doing “war work” so that he was not eligible to be called up.  This elated his mother who was insistent that Chester avoid the war.

One day the crew with whom he was working was attacked by another employee using a flame-thrower, killing one man and blinding Chester, burning his hands so they had to be amputated and destroying an ear.  After being treated in a medical hospital he was sent to the Walt Whitman, a civilian hospital on Long Island, for rehabilitation.  If possible.

Doctor Phillip Cotton is assigned to treat Chester.  His life has been severely disrupted when he was blindsided by his wife’s infidelity. He left his eight-year-old daughter and his family home in Washington, D.C., where he had grown up, to work at Walt Whitman.

At this point in the play any more details of the plot would become spoilers affecting the impact of the work on the audience.

The play is a series of monologues, some are one-liners, with several scenes of interaction between the protagonists.  As they talk directly to the audience we hear parallel stories from their respective lives that complement each other’s experiences.  Occasionally their thoughts overlap as they comment on the various relationships and situations in which they have found themselves.  These remarks clarify their insights into themselves and, in many cases, their motivations.

There are recurring elements that heighten the drama and the significance of their observations.  In addition to Chester’s physical blindness, other characters – Dr. Cotton and people in his life, Mr. and Mrs. Bailey and those in Chester’s life – evince a symbolic blindness.

What makes Chester Bailey gripping is the artistry of the actors, director and entire design crew.  The Birneys inhabit their characters.  Ephraim as Chester is endearing and dynamic.  His hands and facial expressions complement the stories he tells and the emotions that batter him.  As the play develops his characterization blooms as it becomes more deeply resonant .  Chester’s pain demands and receives our empathy.  His voice is full as he employs a consistent Brooklynese accent and his articulation is precise.  There are moments when  he takes your breath away.  It is an unforgettable performance thanks to both the technical and artistic qualities.

The elder Birney’s Phillip Cotton is a direct contrast in that is more controlled given the age and profession of the character.  Yet, he also earns our understanding and compassion as he informs us of the tribulations with which he must contend.  He does not easily share his feelings with his son’s vitality; instead, he utters his lines with a gentle but painful sincerity.  The magic between the two actors goes beyond the familial relationship and generates into consummate acting.

Ron Lagomarsino directed the world premiere of Chester Bailey at American Conservatory Theatre followed by a run at the Contemporary American Theatre Festival.  His direction here is tight as it barrels forward through the complications and conflicts giving dramatic texture to the myriad emotions of the characters.  The production could easily be mawkish but Lagomarsino’s control and understanding of the men’s emotional structure and needs imbues the production with sensitivity and insight.  His staging is electric as he fluidly moves his actors into dramatic stage pictures.

The set designed by Beowulf Boritt is surrounded by towering windows of different configurations that identify  locations on either side of the stage from vintage Penn Station which morphs into institutional barred windows.  The upstage area seems to go on without end into blackness.  With spare furniture… a bed, a wheelchair, a desk and a bench… we see various spaces with and without concrete suggestions.

Peter Kaczorowski’s lighting adds to the set’s atmosphere by creating shadows within the playing area and across the actors’ faces.  Many of the cues are instantaneous while others are slow fades emphasizing the emotional content of scenes.  The muted colored clothing, pajamas and robe for Chester and a suit for Cotton, designed by Toni-Leslie James define the character’s personalities.  Brendan Aanes’ sound effectively adds to the tone of the play.

Chester Bailey is simply a stunning piece of theatre!

Chester Bailey runs from June 18 through July 9, 2021, at the Barrington Stage Company’s Boyd-Quinson Stage, 30 Union Street, Pittsfield, MA.For information and tickets go to their website at http://www.barringtonstageco.org or call 413-236-8888.