REVIEW: “The Importance of Being Earnest” at the Berkshire Theatre Group 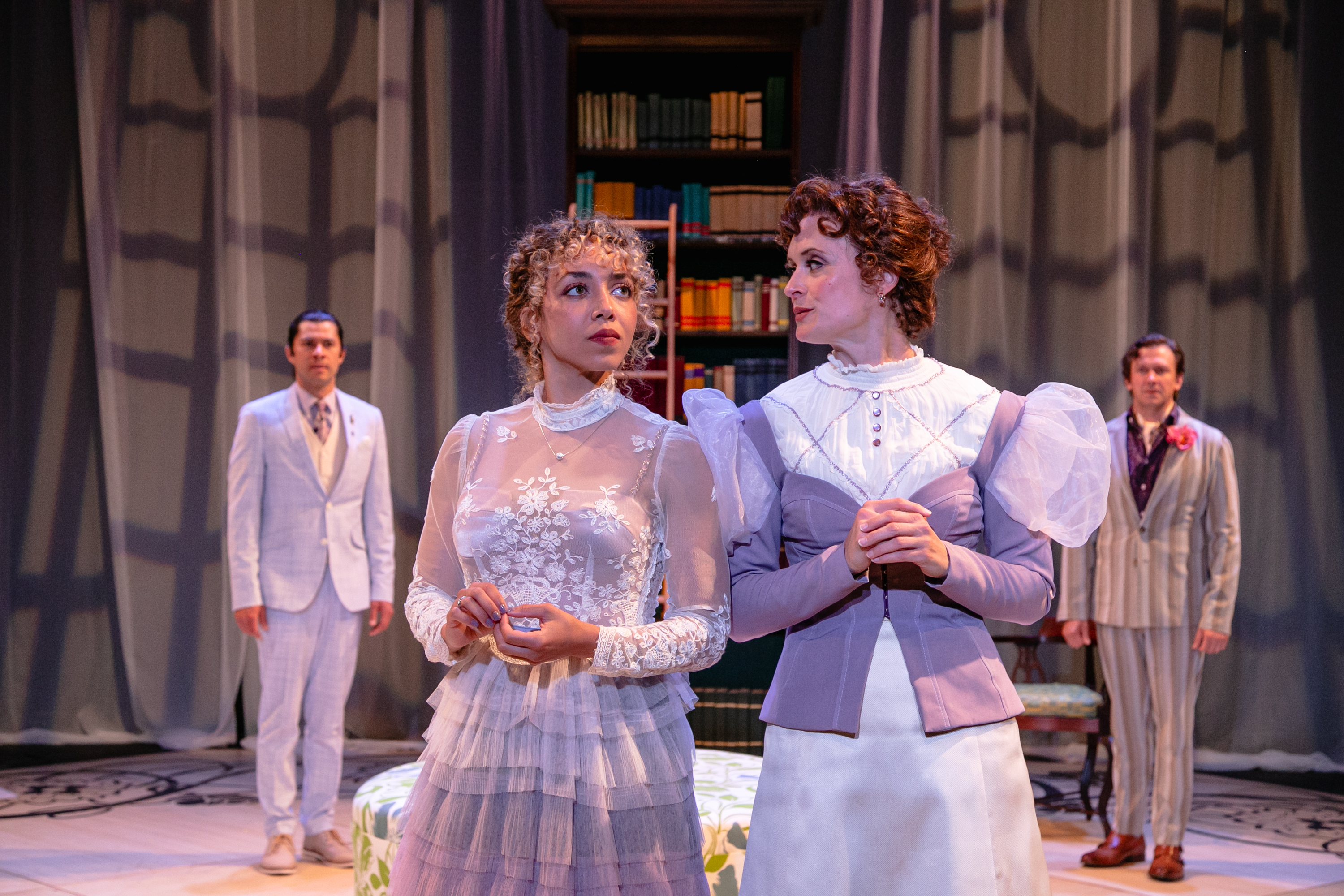 REVIEW: “The Importance of Being Earnest” at the Berkshire Theatre Group

One of the theatre’s classic satires is Oscar Wilde’s 1895 The Importance of Being Earnest, the subtitle being “A Trivial Comedy for Serious People.”  It aims for the British upper class’s “rules” for marriage, and their narcissistic vision of social distinctions and life styles. Berkshire Theatre Group has mounted an engaging production with much laughter and insight at the Unicorn Theatre in Stockbridge.

The plot takes twists and turns as Algernon and Jack create other personas to impress the young women.  Compounding the complications is that Jack is seemingly an orphan with no idea of his parentage. Little by little questions are answered, romance wins and, of course, everything ends happily.

Wilde’s script is replete with his characteristic bitter humor that paints the picture of the upper crust’s egotism.  Some of the more famous lines from the play illustrating Wilde’s wit include:

Lady Bracknell:  Never speak disrespectfully of society, Algernon.  Only people who can’t get into it do that.

Miss Prism: The good ended happily, and the bad unhappily. That is what Fiction means.

Gwendolyn: In matters of grave importance, style, not sincerity is the vital thing.

Lady Bracknell: To lose one parent, Mr. Worthing, may be regarded as a misfortune; to lose both looks like carelessness.

Algernon: The only way to behave to a woman is to make love to her, if she is pretty, and to some one else, if she is plain.

It is not only his witticisms that drives the plot, but Wilde’s knowledge of play structure.  He subtly builds the complications in the early scenes defining the conflicts among the various characters. Then he focuses on the crisis in which something must be done to solve the problems the characters face, followed by a deus ex machina that propels the plot to a satisfactory conclusion.

This production, directed by David Auburn, is beautifully mounted allowing the actors to enhance the pace with great energy and comic timing.  The stage pictures illuminate the relationships and conflicts of the various couples and protagonists.

The catalyst for most of the action is Ms. Harris’s Lady Bracknell.  With her expressive voice intoning her sarcasm and skepticism thanks to Mr. Wilde she receives most of the laughs.  By dint of Bracknell’s place in society and Harris physicality, she dominates the stage as the others show obeisance to her until they don’t.  Shawn Fagan’s Algernon and Mitchell Winter’s Jack’s bantering allows them to pose and announce Wilde’s one-liners.  They carry themselves well and look as if they truly believe they are society’s superiors.

Rebecca Brooksher and Claire Saunders’ characters are from the same mold as the gentlemen, though Saunders has the added responsibility of being a teen-ager who has yet to visit the world.  They have a deliciously friendly scene when they first meet in which they chat about Earnest until they believe they are at odds with each other.  Their “civilized” argument with its insulting retorts is a one-act play all by itself.

The somewhat unusual relationship of Adkins’ Reverend Chasuble and Mays’ Miss Prism is in sharp contrast with the other characters.  Though there are hidden longings informing their lines they are as prim and proper as they should be making them almost lovable.  Matt Sullivan in the role of two different butlers often views his “betters” with a respect that conceals disdain.

The style of acting is in concert with the playwright’s intentions.  This is an English drawing-room farce and the cast must use the tone and articulation of England’s upper class pretensions. Oftentimes, however, the clipped accent indicative of the stereotypical speech patterns leads to the rapid delivery of lines which tends to be too rapid to be clearly understood.  Also, a number of the witticisms deliver their laughs toward the end of the line and these are sometimes expressed at a low volume making them difficult to be heard.

Bill Clarke’s set is elegant using mostly black and white with a touch of green as the only colors of the furniture, the drapes that surround the stage, the various props as well as the design on the stage floor.  Because of the set’s simplicity the vibrant costumes by Hunter Kaczorowski become highlighted as they define each character’s personality and social status.  The lighting by Daniel J. Kotlowitz unobtrusively complements the various technical designs.

The production, though maintaining Wilde’s cynicism, is very light-hearted in this production which concludes with a charming curtain call.  As the run develops the minor problems should be solved and a good time guaranteed.