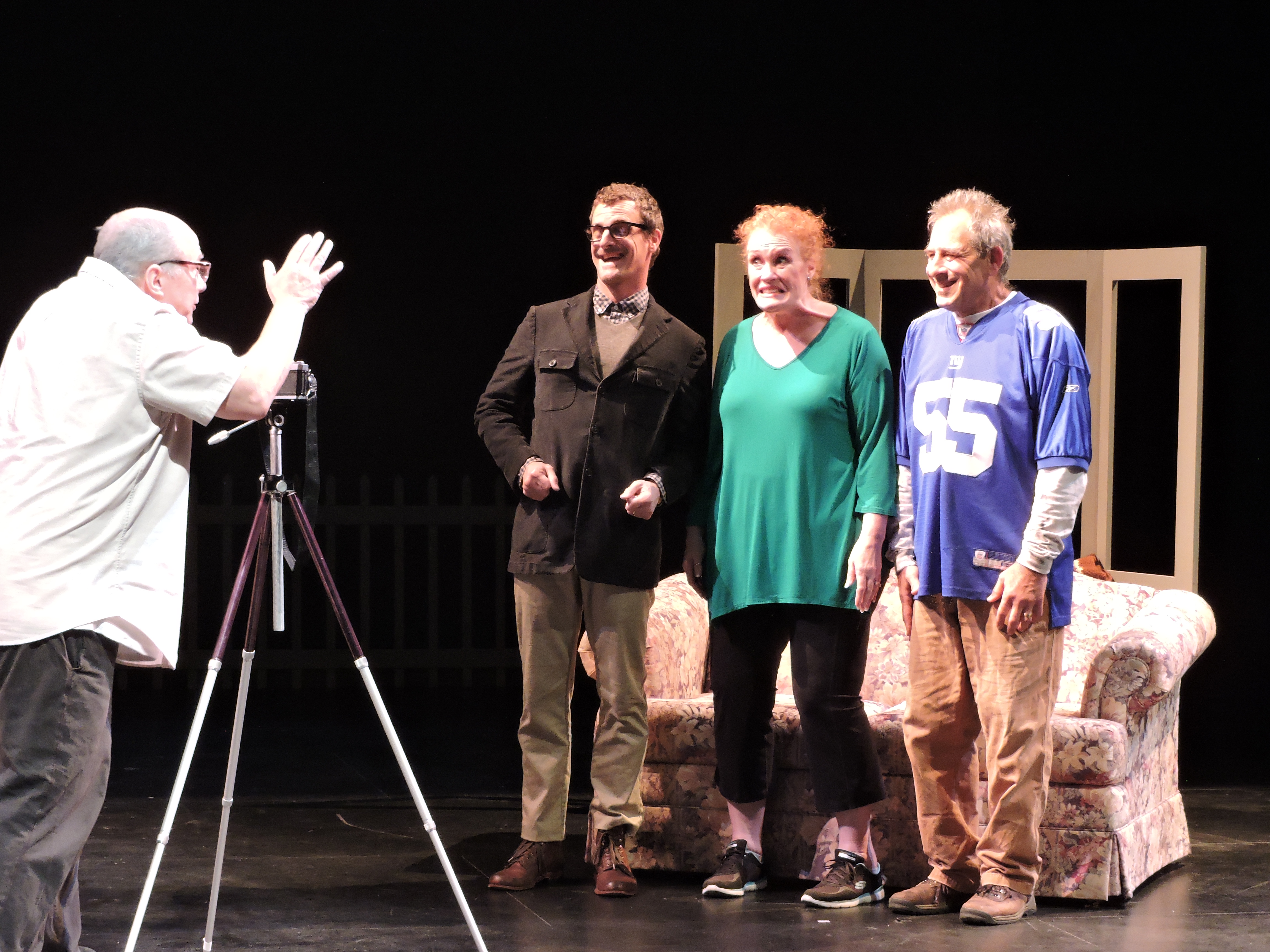 “I never wanted to write anything autobiographical.  To put my life and the lives of those around me on stage crossed a boundary of privacy I promised myself I would never do.”  So says playwright Mark St. Germain in the Playwright’s Note to his new play, Dad, now playing at the Great Barrington Public Theater.  But when actor Mark H. Dold steps onstage, announcing that he is Mark St. Germain and this play will reveal his relationship with his father (Jim Frangione), brother Paul (David Smilow) and sister Lynn (Peggy Pharr Wilson), some in the audience may wonder whether he is actually the playwright or an actor portraying him.

And thus begins a metatheatrical journey about the complex relationship between these siblings and their father, never letting the audience forget that this is a play written by a playwright who places himself onstage.  Not only does he break the fourth wall to share his memories with us but so do his siblings, even arguing about whose play it is.  This nonlinear play represents the characters at different ages, always trying to understand their difficult father and the terror he inspired in them.

Mark St. Germain has written for film, television and theatre, having been a recipient of the Outer Critics Circle Award, the Lucille Lortel Award and the Off Broadway Alliance Award.  He is an associate artist at Barrington Stage Company, where many of his plays have been produced including:  Freud’s Last Session, Becoming Dr. Ruth, Best of Enemies, and Dancing Lessons, with Eleanor and The Crossing  scheduled for BSC this season.

This well-acted, fast-paced production, beautifully directed by Artistic Director Jim Frangione, lasts a little over an hour.  Aided by scenic designer John Musall’s sparse and fluid mise en scene, using a minimalist approach (a kitchen table with chairs, a large swivel chair that keeps the father center stage like a spider in his web, while allowing him to turn his back on the action, a loveseat, and a wooden structure that serves as shelving/Dad’s basement workshop), the actors are given a spacious playground on which to work.  Costume designer George Veale has provided costumes that signal who the characters are:   a football jersey for Paul, who loves sports, a loose-fitting, bright green overtop for Lynn that affords Wilson’s physicality free reign, and a more formal collared shirt, sweater, and khakis that stifle nerdy, trapped Mark.  Brian Barnett, the lighting designer, always makes it clear whether we are in the present or the past by using colorful pastel lighting each time there is a flashback, accompanied by sound designer Jason Brown’s simple piano and violin compositions.  Barnett beautifully illuminates the upstage wall, where Musall has hung artifacts of Dad’s life (including a string of photographs presumably taken by the father, a would-be photographer).

We view the action through the eyes of Dold, who has developed all sorts of nervous tics—he’s constantly scratching beneath his shirt collar, tugging on his sweater, racing from one side of the very wide stage at the Daniel Arts Center to the other.  We wonder about all this fussiness until we get to know his father, a World War II veteran and mechanical engineer, whose barking criticism and dissatisfaction with his son’s profession would destroy even a strong personality.  His reaction to his father’s often cruel taunts is to freeze, repressing his emotions to such an extent that when he finally discovers why his father behaves as he does, his body betrays him, breaking down.  Taking over the role of the father as a result of a last minute cast change, Frangione finds a way to humanize Dad, somehow avoiding what could have been the one-note performance of a sick, old, unsympathetic bully who seems to have no love for his children or his deceased wife. Wilson, whose character often avoids her father’s wrath by playing the “girl card,” fully embodies Lynn, the only female in the family, convincing us of her sincerity when she asks her siblings to forgive their father, the son of monstrous parents.

But St. Germain knows from his own experience as a writer and the son of this father that the play, like his life, would be too dark if it weren’t tempered with humor.  One of the ironies in this piece is that Dad accuses his sitcom-writing son Mark of not being funny, while heaping praise on his golden child, track-star son Paul, who he insists is the funny one.  And David Smilow is absolutely up to the task as Paul, casually tossing off one-liners that keep us laughing.   Kudos to the playwright, director and cast for doing such a fine job of steering us through the dangerous waters of this family’s past.

DAD runs from June 24—July 3 at The McConnell Theatre, Daniel Arts Center, Wednesday through Saturday at 7:30pm and Sunday at 3:00pm.  For tickets call 413-707-2901 or online at greatbarringtonpublictheater.org.  Masks must be worn at all times; social distancing is maintained.