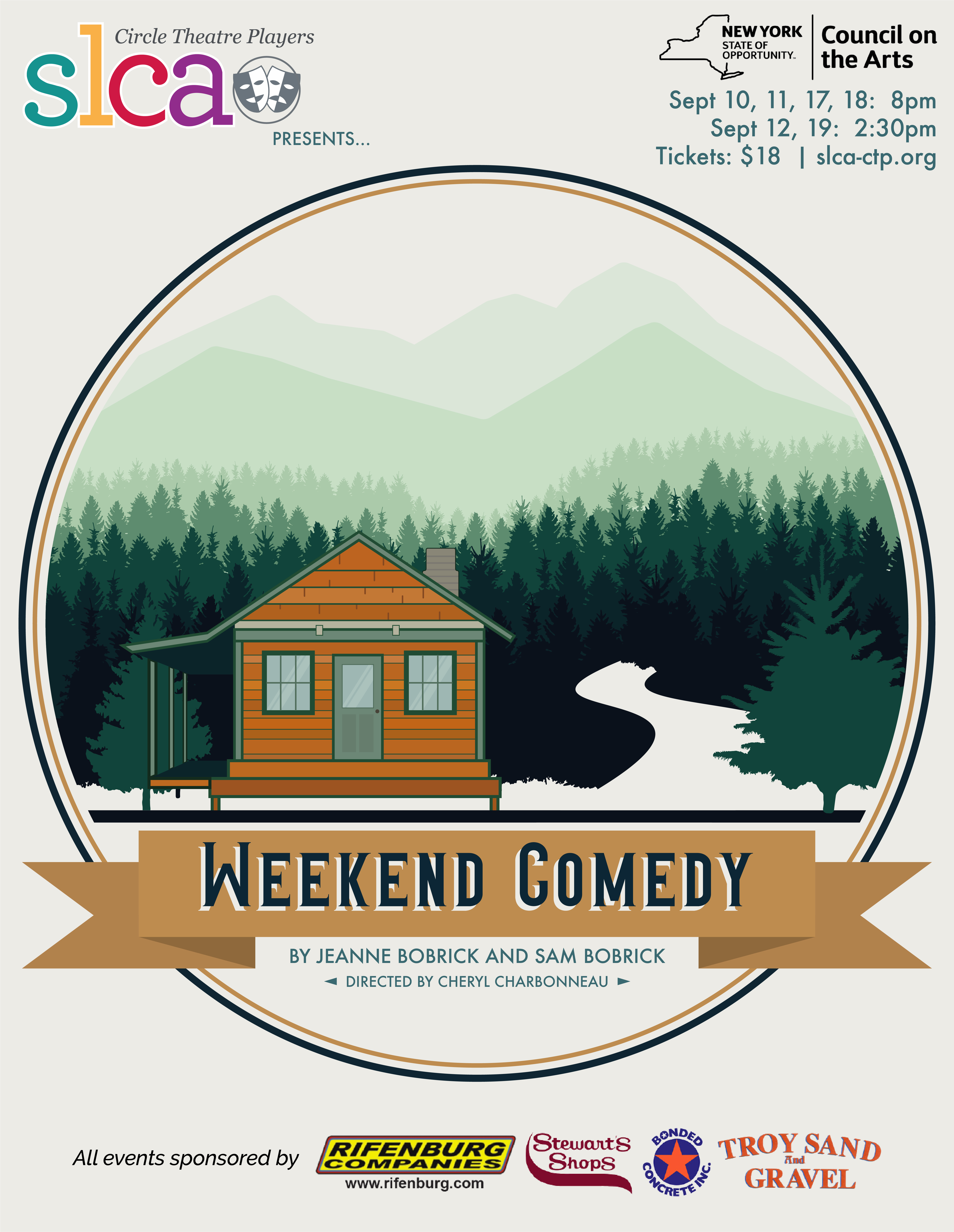 An older couple rents a rural getaway; however, due to a mixup in reservations, a younger couple also arrives.  Their decision to share leads to a comedic clash between the generations.

JOE PHILLIPS (Frank Jackson) is making his debut with Circle Theater but is no stranger to local stages. Professionally, he was a frequent guest artist with NYSTI, appearing in KING ISLAND CHRISTMAS, ARSENIC AND OLD LACE, 1776, and IDIOT’s DELIGHT, among many others; has appeared at Capital Repertory Theater in KING O’ THE MOON, MAN OF LA MANCHA and GYPSY; at Lake George Dinner Theater (BREAKING LEGS) and the Empire Center for the Performing Arts (SAUL BELLOW ONSTAGE, SANTA’S LIST), and Proctor’s Theater (HEARTS OF FIRE), as well as Cohoes Music Hall, Park Playhouse and summer stock at Fort Salem Theater, Mac-Hadyn and Theater Barn. His numerous community theater acting credits include TANYS Award-winning performances as Tevye in SLOC’s FIDDLER ON THE ROOF and in Troy Civic’s TWELFTH NIGHT; and he has directed more than 50 productions at many local companies, many with RPI Players, and at Ghent Playhouse (JOHN STEINBECK’S GRAPES OF WRATH)and with a TANYS citation for COMPANY at SLOC. He lives in Colonie with his wife and frequent stage colleague Margot and pursues numerous “gig” employments.

JACKIE DEGIORGIS (Peggy Jackson) – a “realistic actress” with a day job teaching high school science in North Adams, MA is super excited to be performing at SLCA with CTP again! Her favorite past performances include Ida in THE CEMETERY CLUB (Ghent Playhouse); The Narrator in THE ROCKY HORROR SHOW (Town Players of Pittsfield); Nettie in THE SUBJECT WAS ROSES (Minerva Stage); Rima West in DOLLY WEST’S KITCHEN (Mill City Productions) and Helga ten Dorp in DEATHTRAP (Circle Theater Players) for which she received a TANYS Award for Ensemble Acting. Directing credits include THE WHALE, CRIMES OF THE HEART, HARVEYand STEEL MAGNOLIAS.

Joe Frederick (Tony) Joe studied at the Acting Conservatory School resulting in his playing  Jigger in the Troika national tour of Carousel and John Wilkes Booth in Assassins at Stage One Theatre. Next came his experience in film work.  Recently a graduate of SUNYA Albany he plans to pursue a career in Environmental Sciences.  A newcomer to CTP, he is pleased to have the opportunity to return to the theater.

Samantha Miorin (Jill) is a recent-ish grad from Quinnipiac University with her masters as a Pathologists’ Assistant, a lifelong lover of theatre, and a dog mom. Some of her favorite past roles include The Heiress (Marian), Rumors (Chris), The Vagina Monologues (I Was There In The Room), Anton in Show Business (Lisabette), The Tempest (Prospero), All in the Timing (Dawn) and Fools (Sophia). When she’s not on stage, Samantha enjoys participating in a kickball league, crafting, and doing home improvement projects.

Cheryl Charbonneau: Director Cheryl is a TANYS award-winning actor and director. She has also written and produced several plays for children which have been performed in area schools and libraries. Cheryl especially enjoys the challenge and excitement of directing new works.  Her favorite contemporary play would have to be John Cariani’s Almost, Maine, which she’s had the pleasure of directing for three different theater companies. Two of her favorite acting roles were In Neil Simon’s plays, Mrs. Sitgood in London Suite and Claire in Rumors.