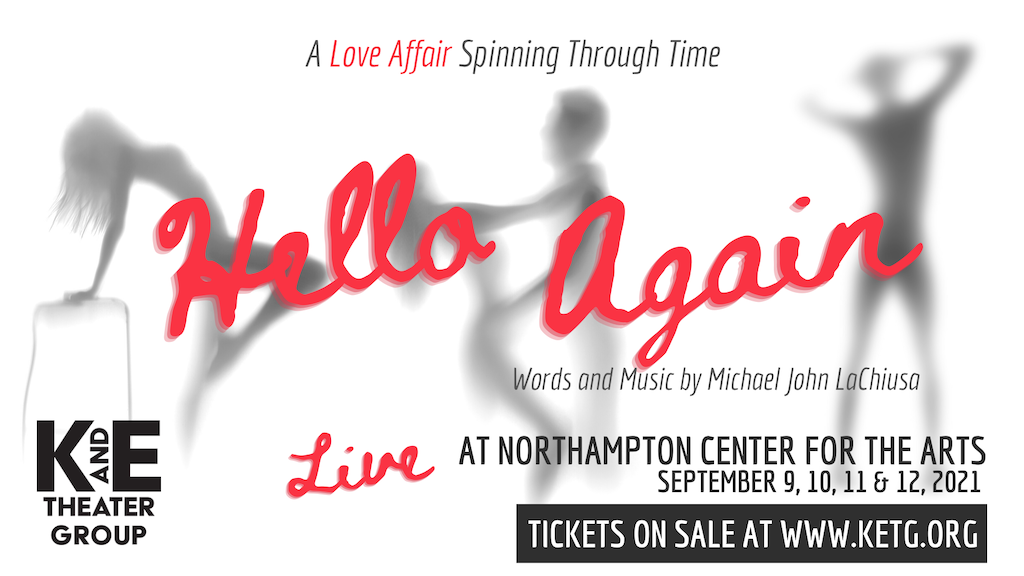 Experience “A Musical Love Affair Spinning Through Time” with the Drama Desk Award-Nominated Production of Hello Again, presented by K and E Theater Group, September 9-12, 2021 at Northampton Center for the Arts in Northampton, Massachusetts.

NORTHAMPTON, MA – K and E Theater Group will present its first show in part one of its supersized Season 2 saying Hello Again, onstage at Northampton Center for the Arts, September 9-12, 2021.

Love and desire clash as each character seeks elusive connections in this musical inspired by Arthur Schnitzler’s controversial 1897 play, La Ronde, the passion, sex, and power of ten love affairs, one from each decade of the 20th Century come to life through The Whore, The Young Thing, The Senator, The Soldier and others as they navigate each new sexual entanglement. Five-time Tony Award Nominee Michael John LaChiusa brings Schnitzler’s love stories to life with musical and lyrical styles of each decade, a variety of musical styles ranging from opera to 1970s disco while simultaneously introducing musical and lyrical echoes throughout to tie all the characters and their experiences together.

The K and E Theater production of Hello Again is directed and choreographed by K and E Theater Group President and Artistic Director Eddie Zitka, who has also directed and staged the company’s previous productions of Sweeney Todd, Songs for a New World, and Assassins. His performance credits include the first national tour of The Wedding Singer and numerous regional productions, including Ogunquit Playhouse’s Cinderella and All Shook Up, Thoroughly Modern Millie at Greater Boston Stage Company and Hoop Dee Doo Revue at Walt Disney World. David Cavallin is the production’s music director. Ken Comia serves as producer. The season’s supporting sponsor is INSIGHT Structures, Inc., based in Houston, Texas.

Performances run from Thursday, September 9, through Sunday, September 12, 2021. Tickets are general admission for $25.00. There is no reserved seating. This production includes sexual content and partial nudity. Parental guidance is suggested.

All performances are at Northampton Center for the Arts, located at 33 Hawley Street in Northampton, Massachusetts. Showtimes for Hello Again are 8:00 PM on Thursday, Friday and Saturday evenings. The closing performance is presented at a matinee on Sunday, September 12th beginning at 2:00 PM. All audience members are required to wear a mask covering their nose and mouth while at Northampton Center for the Arts, including while seated watching the show.

Tickets and performance information for Hello Again are available at www.KETG.org.