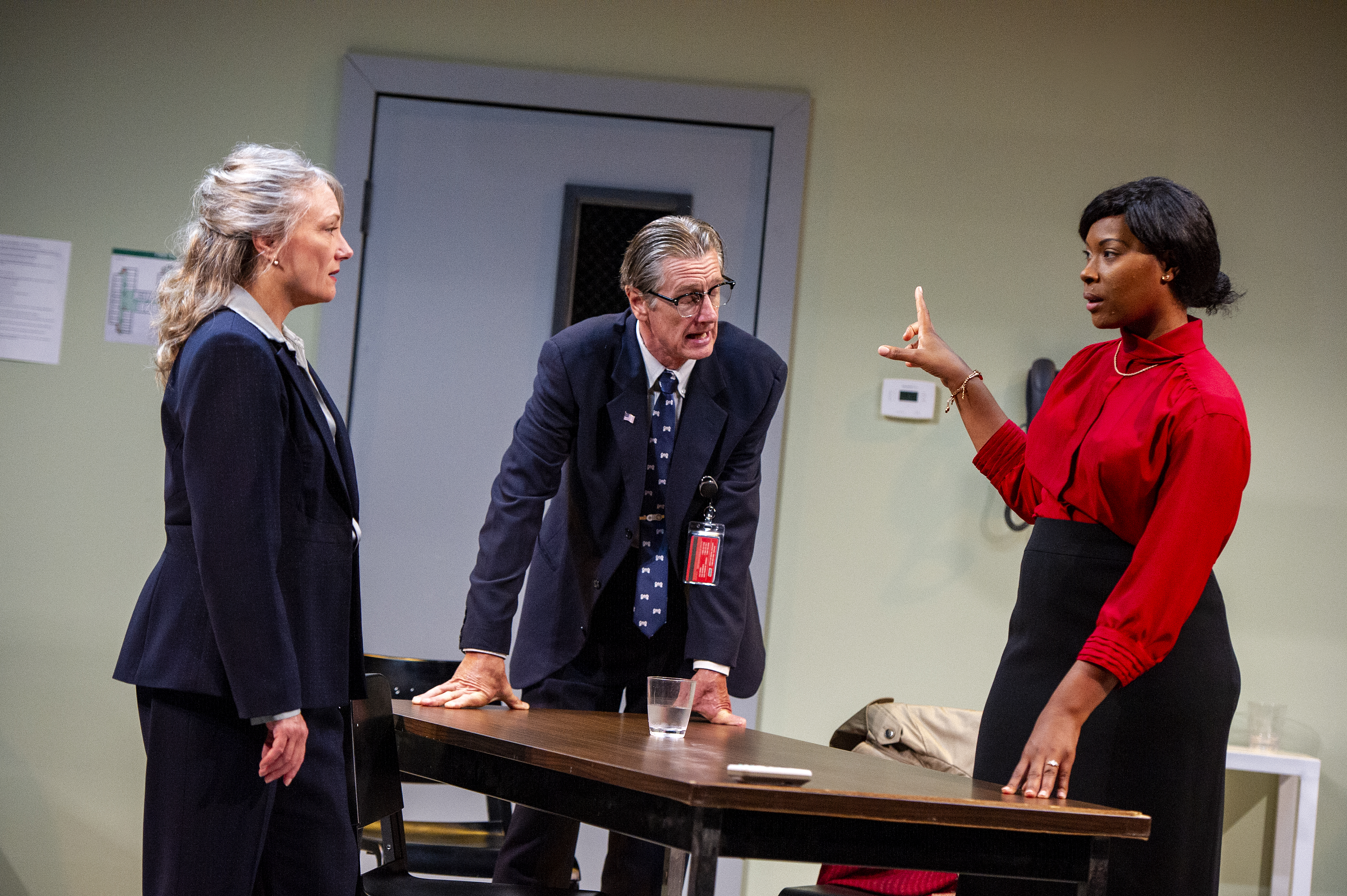 debbie tucker green has been described as “one of the most stylistically innovative and politically engaged playwrights at work in Britain today.”* Her play, hang, is currently receiving a riveting production directed by Regge Life at Shakespeare & Company’s Tina Packer Playhouse.

green, who spells her name and her plays in lower-case, is a director, screenwriter, and an award-winning playwright, most of whose plays have premiered at the Royal Court Theatre in London.  In one of her rare interviews, green confided to Lyn Gardner at The Guardian (2004): “I never set out to write plays. . . I was just messing about, writing stuff down and throwing it away or keeping it if it interested me.  Then the writing started getting longer.  I didn’t know whether it was a poem, the lyrics to a song or a play.”

Indeed, when green began writing plays, critics objected to the unconventional rhythms of her language, her sparse sets, and her unorthodox plot structure.  Influenced by poets and songwriters, including Ntozake Shange, whose 1974 play, FOR COLORED GIRLS WHO HAVE CONSIDERED SUICIDE/WHEN THE RAINBOW IS ENUF began as a series of poems, green admits that the people she admires write “what they think and feel,” rather than following conventional rules.

Looking at hang, we find numerous examples of her stylistic originality.  The set (designed by Patrick Brennan) has reduced the size of the Packer stage, replacing width and depth with black curtains on the sides and rear.  What remains is basically a gray wall (with a door) upstage, a table with four chairs, and a water cooler with plastic cups.  Four strip lights illuminate the stage (lighting designer James Bilnoski), giving the appearance of some sort of interrogation room.

A white man (Ken Cheeseman playing TWO) and woman (Kristin Wold playing ONE) enter, both wearing suits (costumes by Amie Jay), escorting a black woman (Cloteal L. Horne playing THREE), wearing a coat and scarf, covering a lovely red blouse and fitted black skirt.  ONE and TWO clearly work in this place, but we have no idea who THREE is or why she is there.  In Gardner’s interview, she points out the “teasing quality [in green’s plays] that makes the audience work hard to figure out exactly how the characters are connected.”  Is THREE a criminal, a suspect, a witness, are ONE and TWO part of the police force? Little by little, in bits and pieces, we learn more.

What of the language?  Abram’s article describes both the “chaotic dialogue” and the silences in green’s plays, in which we hear “incessant repetition, overlap and interruption.  Yet, amidst this proliferation of speech, much remains unsaid.”  This chaos is evident in the dialogue between ONE and TWO, who are verbally falling all over one another in their attempts to make THREE feel comfortable in this place (would she like water, tea, would she like them to hang up her coat, to turn on the A/C, would she like to bring in someone to accompany her).  Life’s direction of their movement and pacing result in spot-on performances by Cheeseman and Wold, speaking fast and furiously, compared to Horne, who is either silent or answers in the fewest words possible.  Cheeseman, whose position is subordinate to Wold, is a fearful nerd who constantly blurts out secret information, which drives Wold crazy.

The unorthodox plot has us guessing and reassessing for much of the first part of this intermissionless play.  The tension mounts as THREE seeks information from the employees of this institution, whose struggle to remain human is burdened by so many rules and protocols that they begin to lose the battle.

But finally, Horne’s THREE begins to tell her horrific story, delivering the powerful political punch of green’s play.  According to Gardner, this playwright traffics in “urgent, angry accounts of the way we live now. . . whether they are tales of urban dislocation and violence or domestic tales of child abuse.”  Horne’s THREE, who has thus far managed to maintain control of her emotions, though not her trembling hand, begins to disintegrate as she describes a shocking attack on her family that has left her children, her husband and herself scarred for life—empty shells of who they once were.  Apparently she has visited this institution multiple times since the attack, always hoping for justice, but now that the attacker is in prison—is that enough? Or does revenge take over when justice doesn’t cut it?  Horne is frighteningly effective in this role, eclipsing everything going on around her, both by her silences and her (rare) outbursts.

In his Director’s Note, Life argues that this play speaks to today’s reckonings:  “for climate change, global health—but most of all—for Social Justice.” To that end, he adds a prelude:  an offstage protest (“My body, my choice,” [sound by Brendan F Doyle]) accompanied by a pounding drumbeat.  But that type of theatricality is unnecessary because this play’s strength is timeless.

All attendees are required to present proof of vaccination or a recent negative (within 48 hours) Covid test, ID, and remain masked throughout the performance.