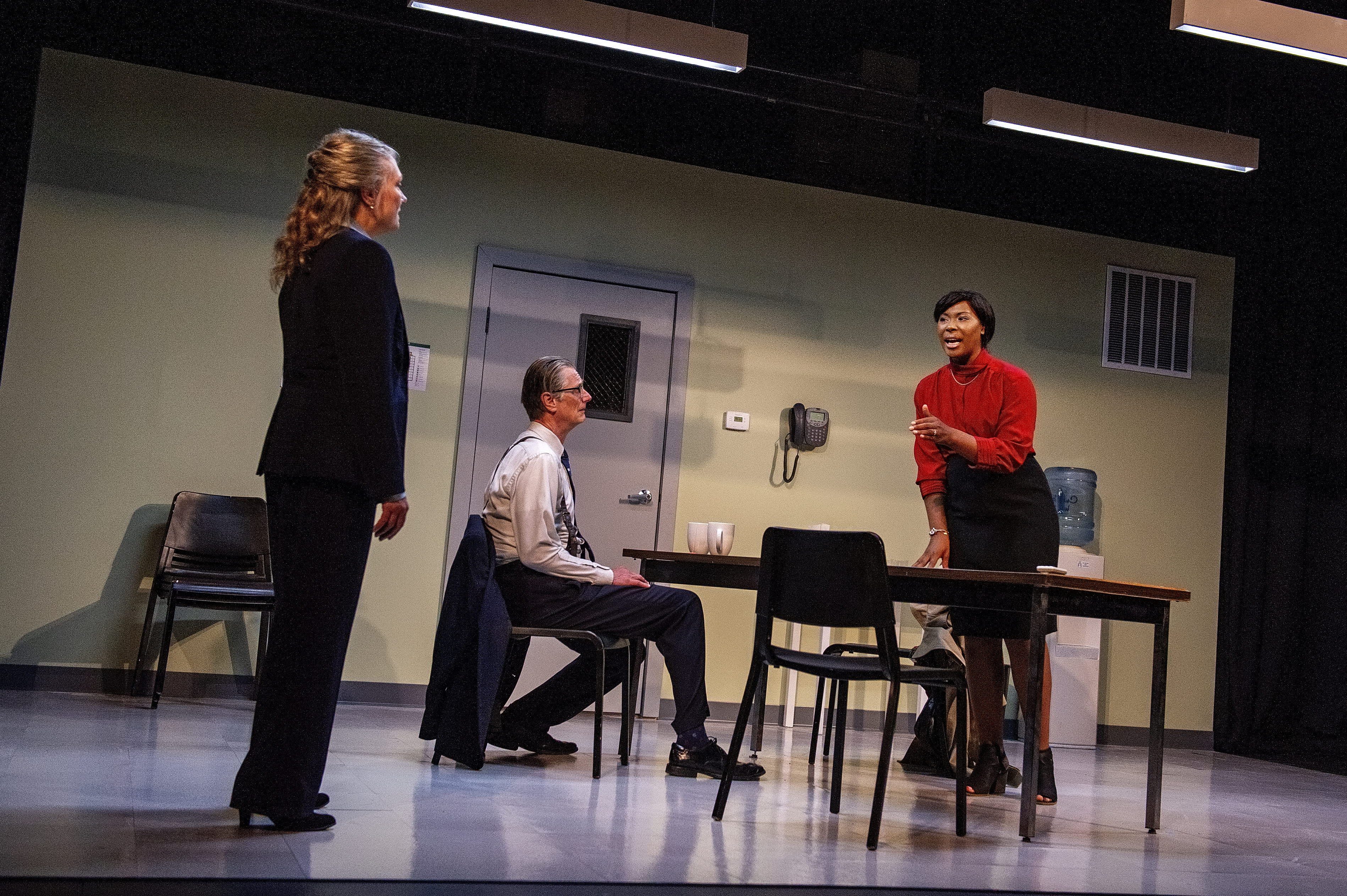 The show opens in the dark where we hear crowds yelling protestations that build until we see two law enforcement officials — One (Kristin Wold) and Two (Ken Cheeseman) lead Three (Cloteal L. Horne) … these are the characters’ identities as named by the playwright… into an interrogation room. This is a stark and foreboding set by Patrick Brennan with overhanging fluorescent lights, a table with four black chairs and a water cooler.

Initially, One and Two do the amenities. Three refuses their concerns with perfunctory reactions creating a defiant tone to the relationships. The audience is not told why Three is being interviewed until much of the play has run its 90-minute course. This allows for a number of comments and observations that feel as if they are cryptic for the sake of being cryptic.

green’s script recreates conversations with overlapping statements, broken sentences, repetition and redundancy. This may sound real, but it moves the plot forward at a snail’s pace. If her intent is to keep the audience guessing, she succeeds at a price that weakens the dramatic build of the play. Though we are never directly told what violence Three has been subjected to, it is ultimately implied.

Director Regge Life says in his notes “hang is about trauma, because the quest for Social Justice and accountability is traumatic… what decision would you or I make if we had a choice how the person or the persons responsible for the injustice would pay?” Three tells the investigators several times that she has made her decision regarding the offenders’ punishment. This may be how tucker and Life define what “Social Justice” means. Giving the victim the right to select the manner of punishment would disrupt the judicial system.

The cast is obviously working hard, but Horne is sometimes inaudible which is a problem since she carries the weight of the play. She has several throwaway lines which she swallows and speaks so low they lose their effectiveness. However, The most compelling passages in the play are Three’s descriptions of the pain and life changes that she, her husband, young son and daughter have borne and how their lives and personalities have been forever damaged. These moments are gripping.

There is an underlying conflict between the two investigators that occasionally hampers the interview. Wold’s One, who is Two’s superior, is a no-nonsense investigator who tries various ploys to get Three to cooperate. She loses her drive, however, when Three confronts the detective about aspects of her personal life. Two, as played by Cheeseman, is sometimes goofy and sometimes direct in a solicitous manner. His compassion is real as One’s is manipulative. Wold and Cheeseman play off each other nicely creating another line of drama.

Life’s direction is sharp given that the play takes place in a small room with little space which does not allow much movement. At one point Two sits at the table with his back to the audience for an inordinate amount of time, a theatrical no-no but effective in this instance. The director has tried to make the drama build but there are occasional moments in the script that slows the pace of the play. A nice touch is when Three is alone onstage and the air conditioner, which has been on throughout the interview, builds in volume to heighten tension followed by a sudden blackout to end the play.

There are minimal technical highlights. The dramatic opening and closing moments of the play are underscored by Brendan F. Doyle’s sound design. Amie Jay’s costumes indicate the character’s personalities. One is strait-laced in a black pants and jacket while Two weas a conservative suit. Three is well-dressed in an attractive blouse and skirt.

Though the play has some weaknesses it certainly leaves you with a lot to think about.