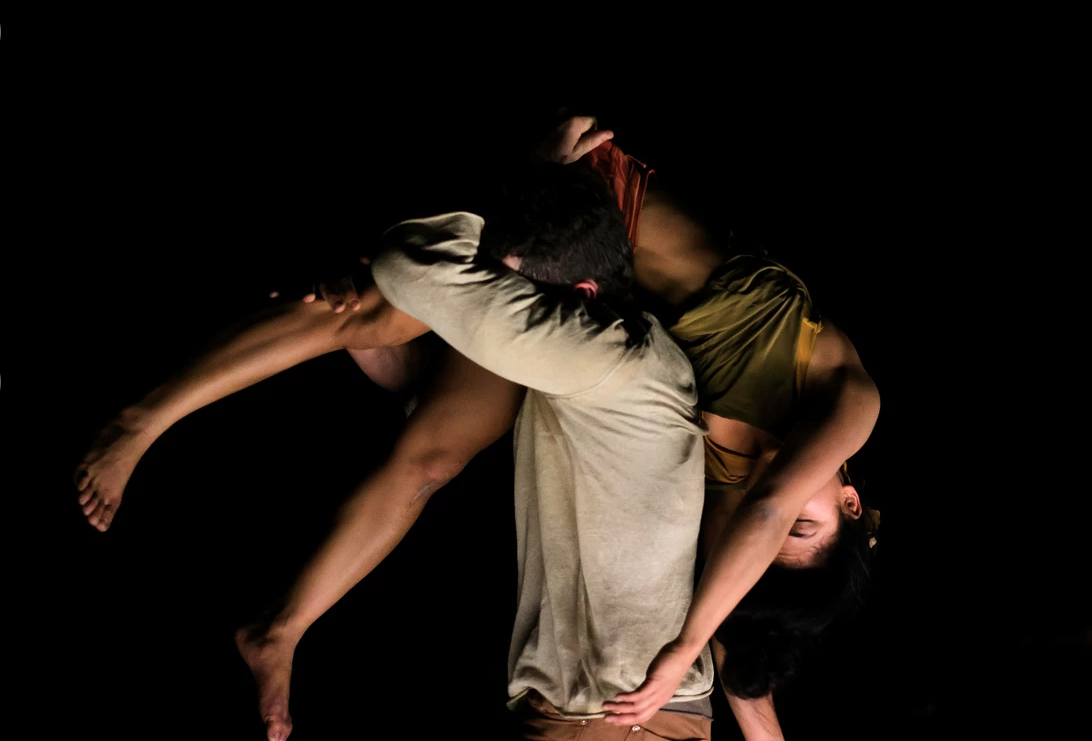 Phasmes and Hêtre, two signature works of Compagnie Libertivore, at PS21, December 21–22. Written and choreographed by Fanny Soriano with her trademark merging of dance and acrobatics, Phasmes (2017) is a duet that explores the intimate encounter between human beings and the natural world. It is a companion piece to the earlier Hêtre (2015), a solo work that dramatizes a young woman’s retreat from the world into a mysterious, dreamlike forest. Together they form a diptych, displays of aerial and earthbound movement that are visually mesmerizing, in turns delicate and poetic, acrobatic and muscular.

In Phasmes (phasmids, orstick insects), a mysterious figure on the dimly lit stage alters in appearance from a galloping headless creature, to a delicate insect, to a creeping mass that resembles alien architecture. Then the figure reveals itself as two bodies behaving as one, unfolding and recoiling, assuming abstract and evocative forms. The performers, enthralled by the multiplicity of possibilities, continually shift their weight and balance, searching for a common center of gravity. Their movements, at times in harmony, at others in opposition, invent a new acrobatic language, sensuous yet disturbing, fragile yet brutal, questioning humans’ place in nature. In counterpoint to the contemplative Hêtre, the choreography of Phasmes is more spirited, acrobatic, and playful. Mathieu Dochtermann, writing in Toute la Culture, praised the dancers’ “pure, untamed animality, their effortless grace and stunning technique.”

“Suffering from solitude is a bad sign; the only thing I have ever suffered from is ‘multitude.’ ” – Friedrich Nietzsche, Ecce Homo

A solo dance and acrobatic performance born of the vital need for solitude in a world where we are assailed by an endless flood of external stimuli clamoring for our attention, Hêtre—a play on the homophones “hêtre”(beech tree) and “être” (being)—traces the metamorphosis of a young woman, lithe and expressive, who, weaving and gliding, appears to melt into the gnarled limb of a beech tree that is the only other visible onstage presence during her reverie. Hêtre’s power stems from its cross-fertilization of dance and circus arts, its tenderness and simplicity, and the virtuosic grace of its representation of a young woman discovering a more intimate world.

Dancer and aerial acrobat Fanny Soriano founded Compagnie Libertivore in 2005 with Jules Beckman, a musician and multidisciplinary performing artist. They named the company after their initial co-creation, Libertivore, a meditation in movement on the tension between the conflicting desires for love and solitude. When Beckman departed to found his own company, Soriano became Compagnie Libertivore’s sole artistic director. In addition to Hêtre and Phasmes, she has choreographed Fractales (2018), a work for five dancer-acrobats that continued her inquiry into humanity’s confrontation with the changing environment, and embarked on a new triptych—Ether, Silva, and Marguerite—that address the challenges of sharing with others: socially, spatially, and emotionally.

Whilst originally coming from the suburbs of Paris, it was through travelling in South America that Vincent Brière had his first contacts with processional arts, where he became captivated by juggling and street acrobatics. He relocated to Spain for two years where he refined his training in acrobatics, juggling, Chinese mast, and more. In 2011, he joined the National Circus Arts School of Rosny-sous-Bois where he met Voleak Ung. Brière discovered the incredible wealth of possibility at the intersection of dance and circus arts and both him and Ung went on to join the National Center for Circus Arts of Châlons-en-Champagne, further expanding their acrobatic vocabulary.

Voleak Ung was born in 1994 in Battambang, Cambodia. Ung left home at the age of 13 to attend the National Circus Arts School of Rosny-sous-Bois in Paris. It was here that she refined her circus fundamentals through rigorous training, sharpened her own artistic voice, and found a passion in acrobatic storytelling at the intersection of dance and circus arts. She met Brière at the National Center for Circus Arts of Châlons-en-Champagne where they created, alongside Soriano, the hand-to-hand duo Phasmes.

Nina Harper gained exposure to circus arts from a very young age, participating in shows by her mother’s circus troupe from the age of 6. Originally from Brazil, Harper studied at the Fratellini Academy in Paris, focusing on aerial movement fused with dance and improvisation. During her training, she participated in several creations staged by Pierre Meunier, Philippe Fenwick, Michele D’Angelo, Stuart Seide, Laurent Frechuret, and many other celebrated theater and circus luminaries. Between 2015 and 2016, she worked with Cie Les Intouchables in the creation of Implosion Suspendue and from 2016 onwards she has worked with Cie Libertivore on the aerobatic dance solo Hêtre, further deepening her exploration into narrative circus performance.

There was an issue retrieving stats. Please try again later.