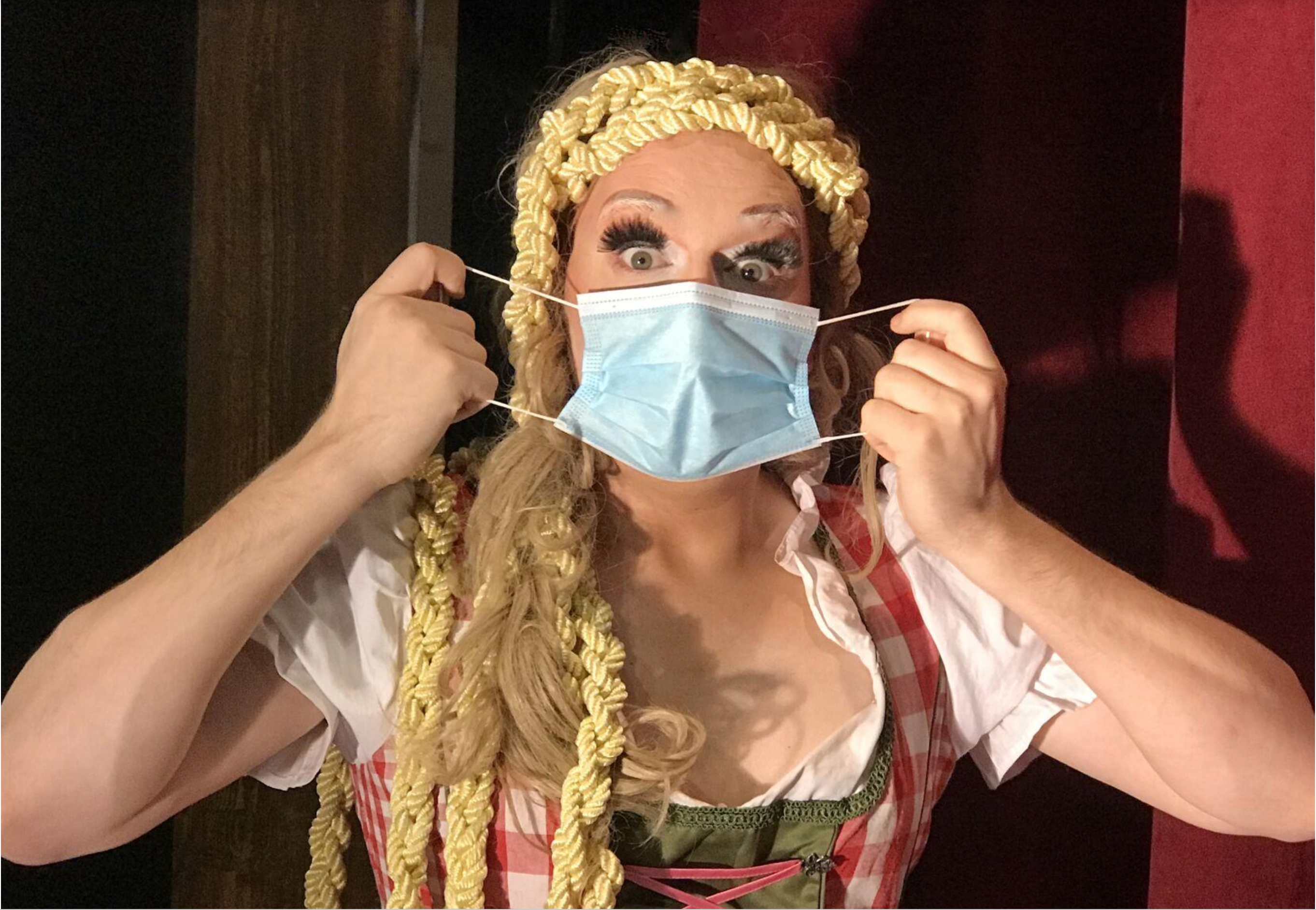 The PantoLoons are back! The Ghent Playhouse has reopened its doors post-pandemic with its signature family-friendly laugh-fest, based on the British holiday tradition of the Panto.

What is a Panto? Well, it is a British theatrical tradition for the holiday season. Basically you take a familiar fairy tale or folk tale, have all the men play the women and the women play the men, add lots of new and (hopefully) witty lyrics to well-known tunes, and ignore the plot completely. There is lots of audience interaction – you get to boo the villains and shout “He’s right behind you!” and such – and there’s a healthy mixture of topical humor on current events along with good old fashioned schtick. Only the most conservative and humorless of folks can fail to be amused by the goings-on.

In Columbia County this tradition was started in 2000 by British-born Judy Staber, who gathered a corps of like-minded Loons to pen a new and original Panto every year. Only one original Loon, costumer and actress Joanne Maurer, remains but the tradition lives on under the direction of Cathy Lee-Visscher and “Rapunzel: Tale of a Quaran-Teen” is the 20th in the series (there was no Panto in 2020 due to COVID – which gets a loud BOOOOooooooo from me!)

“Rapunzel” – the story of a girl in enforced lock-down – was a natural choice for this year, and the Loons have done a nice job of mixing in our real-life pandemic frustrations with teenaged yearnings for freedom and adventure along with the perquisite Wicked Witch (Lee-Visscher) and the addition of Repugnant (Emily Spateholts), the heretofore unknown twin brother of Rapunzel (Sam Reilly).

We all remember the “let down your hair” part of the original fairy tale, but you may have forgotten that it is Rapunzel’s birth mother’s craving for the salad green called rapunzel, available to her only in the witch’s garden, that starts all the trouble. (Yes, the witch names her stolen daughter after a salad green, it’s like calling your child arugula or flashy trout back.)

But here the fact that the witch demands the baker (Mark Wilson) and his wife (Mark “Monk” Schane-Lydon) hand over their longed-for child is softened by the birth of twins. The witch takes Rapunzel and the Bakers (his name is Jim and hers is Tammy Fay) get to keep Repugnant.

Fast forward to the twins’ adolescent years and the story proceeds apace. Rapunzel longs for freedom, she meets a handsome Prince named Leo (Nellie Rustick Meier) and falls in love, but she also meets Repugnant, and they concoct a plan for him to disguise himself as her and sit in the tower so she can escape and spend a day with her Prince.

Well that doesn’t work out so well but you’ll just have to go and see the show to find out how you get from there to the requisite Happy Ending. The proceedings are interrupted periodically by news bulletins about an incipient plague (did the witch cast a spell on everyone??) from Dr. Bony Ouchi (Joanne Maurer).

Maurer, who never fails to make me laugh, is just hilarious as Dr. Ouchi. (And it is here that I must mention that the political humor here is, as always, liberal rather than conservative.) For one thing, the diminutive Maurer really does look like a certain doctor we often see on TV, but her gentle bumbling manner as she rides her hobby horse – Sylvester Stallione – across the land spreading news of the spreading plague, is priceless.

Monk Schane-Lydon and Wilson are a charming couple, with the former opening the show with an side-splitting number about the less pleasant aspects of pregnancy, and Wilson following up later with a little soft shoe number on the plight of a long-suffering husband. Lee-Visscher thoroughly enjoys herself as the Witch, and sings a rousing number about the challenges of parenting a teen.

Reilly is remarkably beautiful in drag, I wish I looked half that good in a dress! But Spateholts was less adept at channeling her inner man. In fact in the end, when she was playing Repugnant, aka Pugs, playing Rapunzel and lusting after Leo’s unseen princely brother, I kept forgetting that she was supposed to be a man. As Rapunzel remarks when her brother first appears in a dress: “Pugs, you’ve got jugs!”

Catherine Schane-Lydon tickles the ivories and serves up a mean martini as the onstage narrator and Tiki Bartender. This year’s crop of Loons are particularly gifted singers – listen for Rustick Meier’s beautiful operatically trained soprano on some surprising high notes in the ensemble – but I found the musical numbers few and far between. More musical mayhem next year, please!

Reilly has constructed a charming forest, baker’s shop, and tower out of cardboard, and Maurer has concocted some great costumes, even though the storyline doesn’t call for her to get as fanciful as some years. All the technical aspects of the show run smoothly with Arielle Lant on sound and lights.

Before I wrap up this year’s Panto review, I must call your attention to the always hilarious stage names the cast lists in the program. Some folks retain the same monikers year after year, and others enjoy making up new ones to suit the theme of the play. I have reproduced them carefully below, and I suggest you read them out loud for maximum hilarity. Why should the fun stop when you leave the theatre?

COVID 19 RESTRICTIONS
All attendees must be fully vaccinated and show proof of vaccination and wear a mask at all time inside the theater.