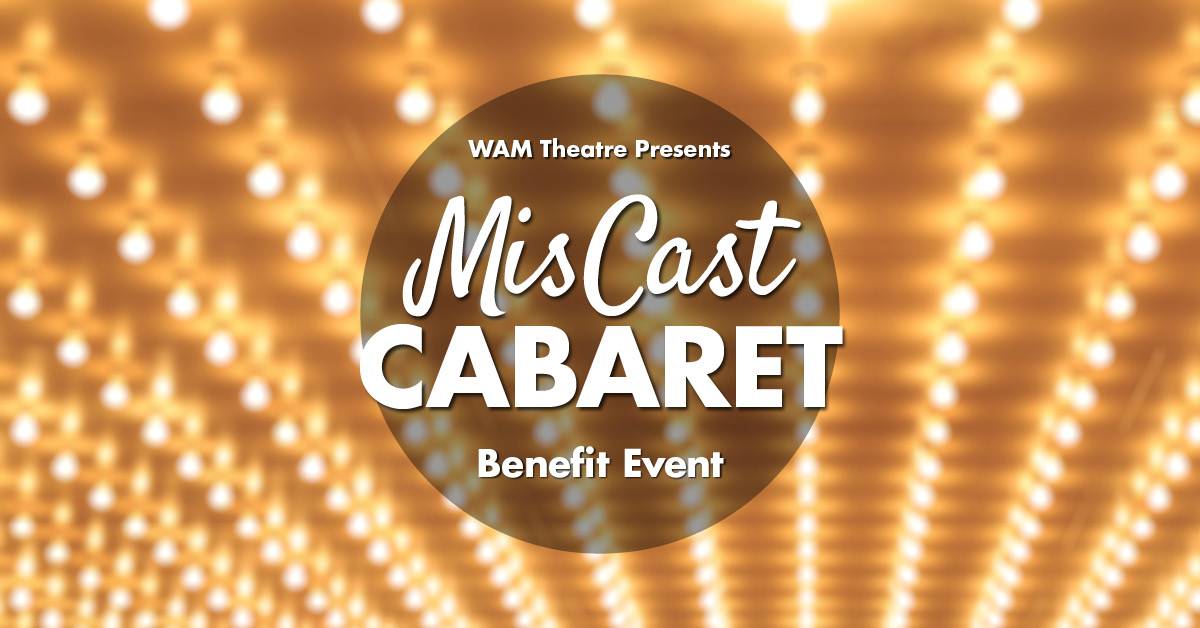 Hosted by the Acclaimed Jayne Atkinson

In this MisCast Cabaret, WAM artists, accompanied by live musicians, will perform favorite Broadway songs from roles in which they would not traditionally be cast.  In line with WAM’s mission, the event provides a fun way to question traditional gender roles – while singing along. Audiences can expect to hear their favorite songs from The Sound of Music, Hamilton, Follies, Gypsy, A Chorus Line, City of Angels, Fun Home, Fiddler on the Roof, Pirates of Penzance, and more.

“All of us at WAM are looking forward to this celebratory night out,” said Producing Artistic Director Kristen van Ginhoven. “ We are eager to gather live with our Berkshire Community for a one night only joyful and moving celebration of our resilience in making our way through this pandemic.”

“At a time of immense turbulence, WAM’s MisCast Cabaret will be a joyful space to celebrate the transformative potential of live performance,” says Associate Artistic Director Talya Kingston. “All the featured singers will tell stories from their own casting experiences and then will sing songs that speak to their hearts.  In this way, it fits in with our 2022 season of dynamic stories of people defying expectations and stereotypes and stepping into power in unexpected ways.”

“I’m thrilled by the evening Kristen and Talya have put together, and I know it’s going to be a wonderful night out,” said Managing Director Molly Merrihew. “The talent of our artists here in the Berkshires is immense, and I’m excited to see these actors perform songs meaningful to them, as we gather to create more opportunities for women and girls here in Berkshire County.”

The MisCast Cabaret will be performed at the Mahaiwe Performing Arts Center (14 Castle Street, Great Barrington, MA 01230) at 7:30pm on Thursday, July 7th. In line with WAM’s accountability work patrons are able to pick their price point and their seat with sliding-scale ticket prices ranging from $50-$250. For tickets and more information visit wamtheatre.com/miscast.

This special performance is underwritten by Arwen Lowbridge and Mike Lane, Ellen Ring, and Hannelore Voness. WAM is also grateful for the support of the MisCast Benefit Committee that includes Carolyn Butler,  Nina Keneally, Karen Richards, and Wendy Welch.

Hosted by the acclaimed Jayne Atkinson

at the Mahaiwe Performing Arts Center

JAYNE ATKINSON (she/her) has enjoyed a long and varied career as an actress, director, and producer. Current Role With WAM: MisCast Cabaret Host. Previous WAM: Ann, Motherhood Out Loud. Broadway: Jayne made her Broadway debut in a revival production of Arthur Miller’s All My Sons. Other Broadway credits include The Rainmaker (Tony nomination), Our Town with Paul Newman, Enchanted April (Tony nomination, Drama Desk nomination; Outer Critics Circle Award) and Blithe Spirit with the wonderful Angela Lansbury. Selected Off-Broadway: The Art of Success (Drama Desk nomination) and The Skriker (Drama Desk nomination). Selected Film: Free Willy 1&2, The Village and Syriana. Selected TV: On television she is known for her guest appearances on the hit series The X-Files, Gossip Girl, Chicago Med and The Good Wife, among others. As a recurring character, she has played Karen Hayes on the award-winning 24, Erin Strauss on Criminal Minds, Secretary of State Catherine Durant on the popular Netflix Series House of Cards, Vice President Teresa Hurst on Madam Secretary, Georgie in The Walking Dead, Daria Reese in Castle Rock, and most recently Della Bedford in Bluff City Law and Ruth Martin in Clarice. Producing: Jayne has produced for WAM and the Berkshire Festival of Women Writers. She also runs Jadana Productions, which specializes in entertainment development. Education: Northwestern University and Yale Drama School. Etc: Jayne’s other areas of expertise include coaching and teaching. In her spare time, she promotes women’s causes, travels, participates in fundraisers. She is married to actor Michel Gill. Together they have one son.

KYLE BOATWRIGHT (she/her) is an actor, musician, and writer based in the Pioneer Valley.  Current Role With WAM: MisCast Cabaret performer. Previous WAM: Vicky (Bright Half Life) Selected Theatre Credits: The Revolutionists (Marianne), Significant Other (Vanessa), Boeing Boeing (Gloria), Seminar (Izzy), RENT (Mimi), A Year with Frog and Toad (Frog). Affiliations: Kyle is the co-founder of Rise Up Productions, an Amherst-based collective of performing artists that produces shows to support social justice organizations. She also works as a developmental editor and sensitivity reader for new musical and literary works, and is on the creative team of Legacy Boy: The Musical.

DANIEL BROAD (he/him) is a bassist who continues to be one of the most sought after musicians in the New England area. Selected Performance Credits: Dan has toured and performed throughout the USA and several European countries. Past projects include Two Worlds Jazz, The Limbshakers, Great American Songbook Live, Sounds of Sinatra, and The Michael Junkins Group.

JASMINE ROCHELLE GOODSPEED (she/they) is a Massachusetts based Native American actor and playwright from the Hassanamisco Nipmuc Tribe. Having produced and written a musical titled 1675 about the Tragedy of King Philip’s War and Deer Island at UMass Amherst, Jasmine aspires to create theatre that uplifts Native stories. Her passion lies in classical and musical theatre. WAM Theatre: Edith/IFN1 in Kamloopa. Theatre Credits Elsewhere: Jasmine just finished a collaboration with Ohketeau and Double Edge Theatre’s Freedom in Season. She also works with local playwrights at Playincubation. Her most recent show was Weaving Penelope, wherein she played the title role. Jasmine was a featured artist as both an actor and director in the 2020 NYC Safe Harbors Native Directors showcase, as well as projects with the group throughout the pandemic. Pre-Pandemic, Jasmine was in collaboration with Double Edge Theatre for both Leonora’s World (2019) and the touring production of Leonora and Aljehandro (2020).  Some past roles also include: Winnifred in Once Upon a Mattress, Louisa in The Fantastiks, and Eliza in My Fair Lady. Selected training: University of Massachusetts, Amherst (BA in Theatre, & English), Five College Certificate in Native American Studies. Training at AMDA NYC.

CRAIG PINDER (he/him) is originally from the Bahamas and his acting credits include leading roles in London’s West End. WAM Theatre: debut.  Selected Theatre Credits Elsewhere: Craig has worked several times with director Trevor Nunn and was an Original Cast member of Les Misérables in London where he went on to play Jean Valjean at the Palace Theatre. Other London credits include Tevye/company in Fiddler on the Roof, The Best Man, Floyd Collins, Veteran’s Day, The White House Murder Case, Macbeth with Mark Rylance, Mamma Mia!, Sunset Boulevard and Children of Eden. Craig has spent seasons at the Royal Shakespeare Company, the Royal National Theatre, and the Royal Exchange in the UK. He was in the Opening Season of Shakespeare’s Globe in London with Mark Rylance and has played various roles in rep theatres both in the UK and the USA. He has made several film and television appearances. A scheduled US tour of Romantics Anonymous was Covid-canceled; Craig is thrilled to be performing once again in theaters and theatres! Creative inspiration: The acting process gives an opportunity to live in another person’s skin which can lead to a greater understanding of others’ feelings and behavior. Community Engagement/Activist work: New Paradigm Theatre, CT Membership/Affiliations: AEA, British AE. Selected training: Royal Academy of Dramatic Art (Acting Diploma), Royal Central School of Speech and Drama (MA, Actor Training and Coaching, with distinction). BSc. (Chemistry with Mathematics), University of Reading. Awards/proudest achievements: Most Promising Actor award at RADA, 1981. Final word: The greatest thing you’ll ever learn is to love and be loved in return. Connect: craigpinder.org

BOB SHEPHERD (he/him) is a pianist who offers a lifetime of experience in solo, small jazz groups and big band formats and is a first-call vocal accompanist in western New England, specializing in the Great American Songbook. Selected Performance Credits: Bob has appeared onstage with Marvin Hamlisch, Dick Haymes, Al Hibbler, Silvia Syms, Bob Brookmeyer, Jimmy Guiffre and many others. Singers appreciate his easygoing, supportive manner as well as his ability to tailor arrangements in any key and in any style at a moment’s notice. Connect: bobshepherdmusic.com

TOM TRUSS (he/him) lives in Great Barrington and straddles the worlds of community based artist/educator, professional dancer and actor, deviser of work and cashier.  Current role with WAM: MisCast Cabaret singer. WAM Theatre: The Thanksgiving Play. Selected Performance Credits Elsewhere: Liz Lerman/Dance Exchange (‘89-’93), Tom Truss Dance Company (‘94-’01), Community Artist at Jacob’s Pillow Dance Festival (‘94-’99), Pappa Taramuhara, Tokyo, Japan (‘03-’04).  Creative Inspiration: Tom finds the best way to deal with life and understand how it works is to make art about it, walk in nature or sit in his bathtub. Community Engagement/Activist Work: Through Berkshire Pulse, Tom teachers classes for the Brain Injury Association of Massachusetts and a class called Moving Life Stories for Immigrants and their Allies in Berkshire County.  Membership/Affiliations: American Society of Alexander Technique, Phi Kappa Phi, Equity Member Candidate. Selected Training: MFA in Acting from the University of Texas, MFA in Choreography from the University of Iowa, Bachelor of Music degrees in Piano Performance from the College of Wooster, AmSAT certification from The Berkeley Alexander Educational Center.  Awards/Proudest Achievements: ongoing development of ReWritten, an evening-length multimedia work that examines the relationship between Herman Melville and Nathaniel Hawthorne; 2022 New England New Works Grant for ReWritten; surviving Covid by creating a podcast called Ask Your Gay Uncle with his nephew Ben Palacios. Final Word: If we applied the creative, kinesthetic and reflective knowledge that somatic dancers have to conflicts, world problems, the military and prison complexes, inequalities, and social injustices, our world would be massively different. Connect: @Makerbakershaker.