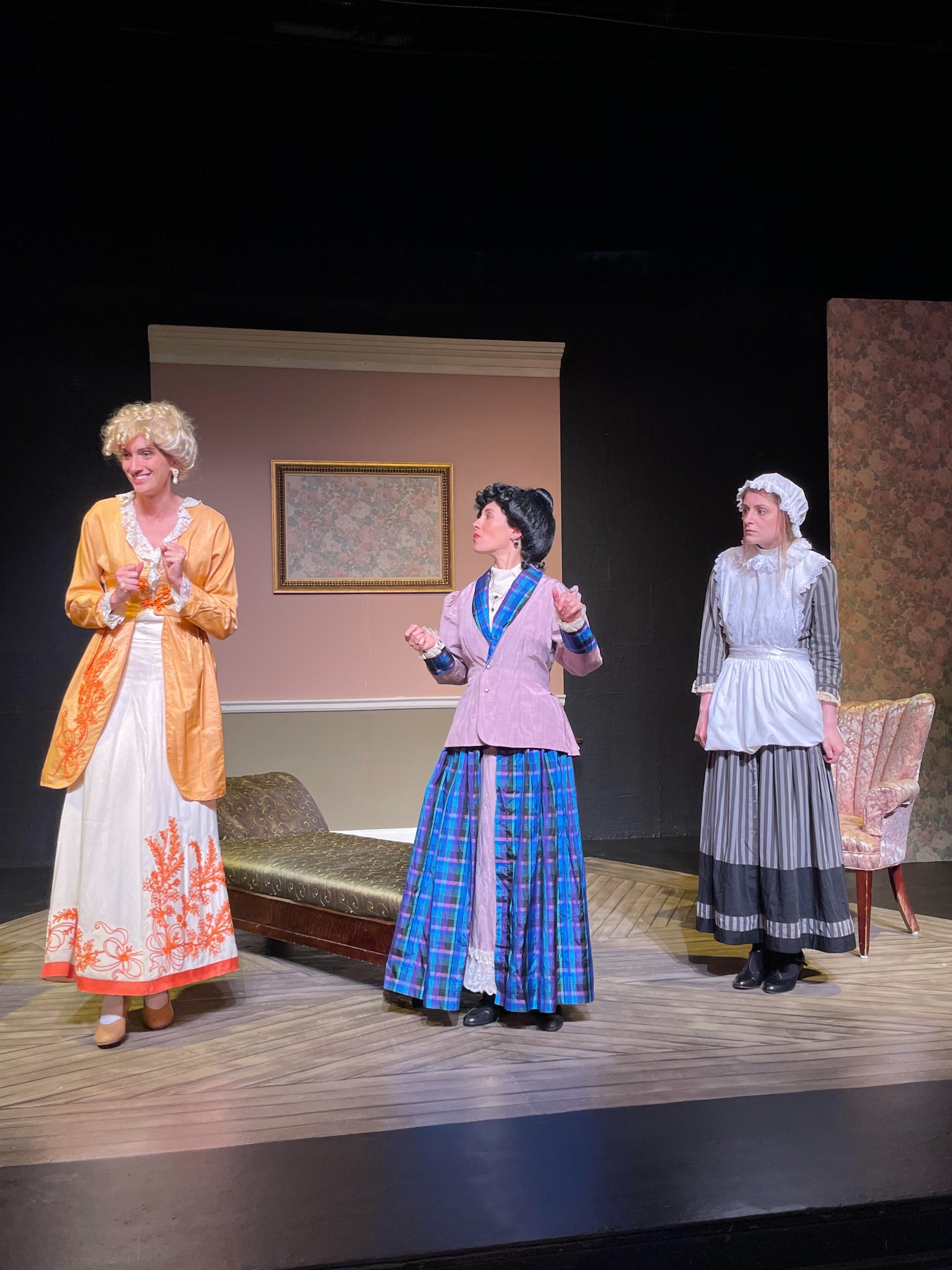 The term “Boston Marriage” was likely derived from Henry James’s 1886 novel The Bostonians. In the late 19th and early 20th Centuries, the term was used to describe a household where two unmarried women lived together, independent of men. Whether all such relationships were romantic and/or sexual is debatable, but at least some of them surely were.

David Mamet’s play is set in Boston, Massachusetts in the 1890s, in the drawing room of Anna (Heather Collins), whose primary source of income is the married man with whom she is having an affair, although it becomes apparent that her heart belongs to Claire (Melinda Nanovsky). Claire, however, is enamored  with another, younger woman, and she has come to ask Anna to let her plan to use her home for a rendezvous with the younger women.

From the beginning of this Theater Barn production, I found myself thoroughly distracted. Collins and Nanovsky sport ill-fitting wigs that are so poorly made that I couldn’t take my eyes off the women’s heads. Several times during the play Nanovsky, perhaps to indicate nervousness,  wraps a finger around one of the blond corkscrew curls that rest on her forehead; the effect only served to emphasize the obviously synthetic hairpiece.

Collins’s delivery, her voice and cadence, are eerily reminiscent of Christine Baranski. Her droll snarkiness suited the role, and she has a dignified presence that works to keep the uneven script on track. Nanovksy is not quite as solid (and I think it fair to hold accountable not only the actress, but also on the script and the direction). She has a tendency to mug, and I wish that director Phil Rice had addressed that.

As Catherine, the maid, Caroline Fairweather offers a welcome boost of energy and humor. She’s fun to watch.

Rice, I feel, created gratuitous comic staging. At times it seemed that he was alternating between directing a farce and a contemporary comedy. It’s important to note that Rice isn’t entirely to blame. Boston Marriage is not Mamet’s best work. Some say he wrote it in response to declarations that he was incapable of creating fully realized female characters. In my view, he still hasn’t done so. That the direction and acting in this production aren’t well anchored has much to do with the unevenness  of the script: it’s simultaneously filled with anachronisms and archaic expressions.

All in all, this uneven play is presented in an uneven production. I would welcome an opportunity to see the work of the actors and the director in a better-made play.