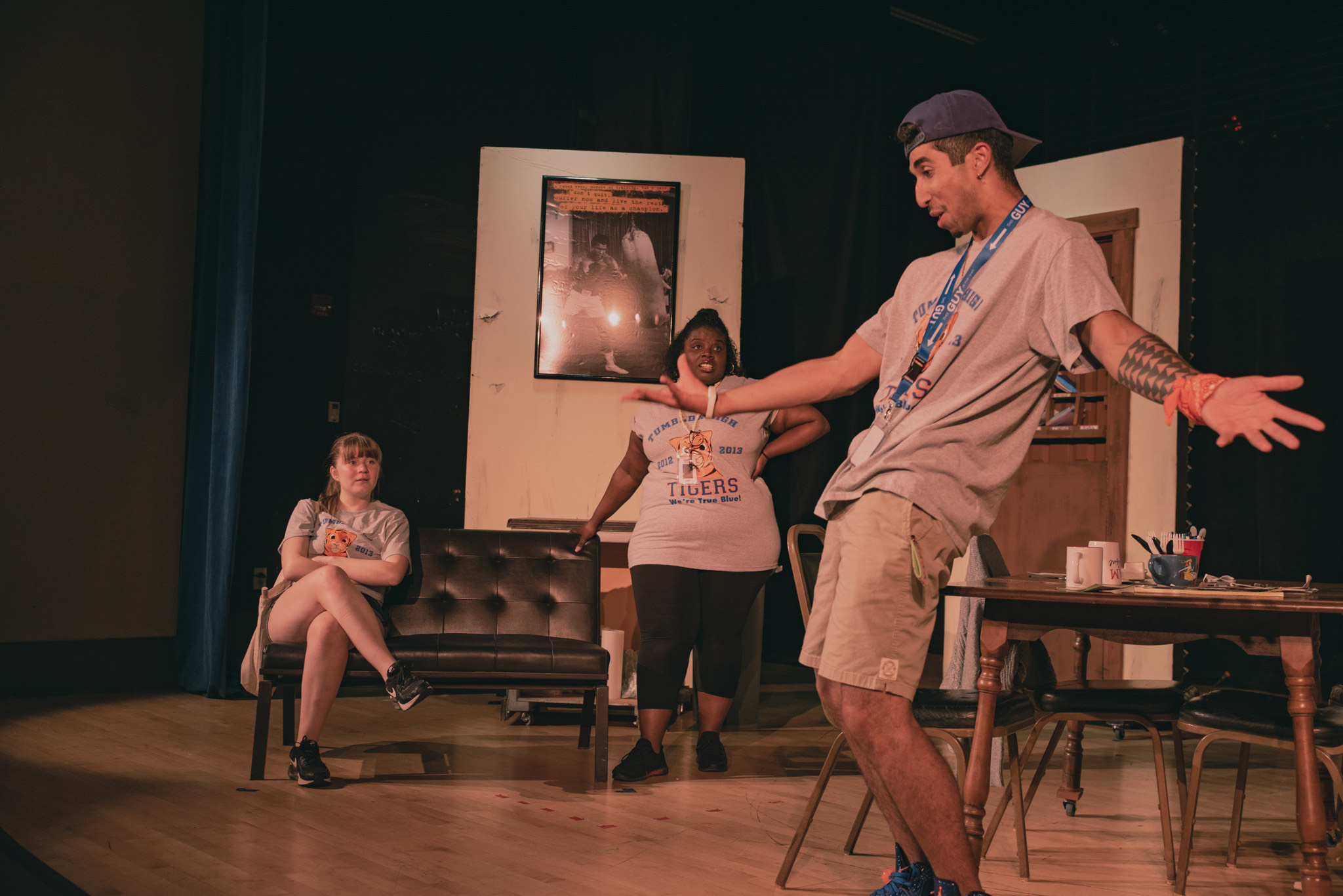 Community theatre is—almost by definition—a miracle. People devote untold hours of their lives to coming together to create and share their stage magic. The Harbinger Theatre is the newest company in the Albany capital region and is avowedly committed to the challenge of new plays and in engaging local actors and practitioners in theatre and creating that magic. The new company’s fifth production in seven months is EXIT STRATEGY by Ike Holter.

The sense of community imbues this production. The performance space is in a former school in a diverse urban neighborhood. Some of the cast members are students of Artistic Director Patrick White (who also teaches his acting classes in the Albany Barn—a community arts center). Holter’s play, about the shutdown of a struggling inner-city high school in Chicago, concerns the impact on the teachers in such a neighborhood.

Holter begins his play with a fractious meeting between Pam, a 23-year veteran of the classroom, and Ricky, a 30-something, spineless, overly cheery and ultimately terrified Vice-Principal of the high school. As the press release tells us: The teachers of Tumbldn High School don’t live in an inspirational teacher movie. They bring mousetraps from home, they make the toilet paper last, and they show up for the kids nobody else shows up for. As Ricky tells Pam the bad news that the school is being closed after this academic year, Pam says it is no surprise given that they have a graduation rate of on 40% and crumbling facilities in a gang-infested neighborhood.

The play moves on to the Teachers’ Lounge where we meet several other members of the teaching staff: Arnold, the senior (white male) instructor, Sadie (African American) and Jania and Luce (Latinx) instructors. As they plan how to announce the closing of the school, Sadie moves on to suggest a last-ditch effort to organize a protest march to save their jobs and community.

Ensuing scenes take us through the school year as the teachers flail about, trying to find a way to save the dying institution. But from the very first it is quite clear that they are up against an authoritarian bureaucracy that is more than willing to bulldoze the school and divest themselves of the responsibility to the community or its people.

Therein lies the problem in Holter’s script. It begins at the end. In spite of pulling together to fight city hall, the characters change very little. Each one seems more concerned about their own future than those of their students. We learn very little about the dreadful front-line situation in the classrooms or the personal struggles of the students. So, what we are left with is fury, a raging against the storm that goes on for a relentless two hours (without intermission). Essentially there is no dramatic arc—the characters are locked into their untenable situation and except for one disastrous action, they do not change.

Arnold is played by Dennis Skiba with an appropriate sartorial and defeatist air. He looks the part and anchors the most effective scene with the other veteran of the educational wars, Pam. As portrayed by Lisa Bryk in an acerbic and gutsy manner, Pam is the fighter who knows when the battle is over. Like Jania (the Latina teacher of special needs children), they have all seen this before and know what is coming. Sadè Thompson brings energy, charm, and feistiness to the role of Sadie who seems to be the only member of the teaching staff concerned about the everyday needs of her students. Brian Raña is genuine and congenial as the character Luce, Ricky’s friend and lover.

When Donnie, a senior at the school, hacks the Tumbldn website to begin a go-fund-me effort for the school, a totally-out-of-his-depth Ricky accepts his help to turn things around. Eventually all are on board in the fruitless effort to save their jobs and thereby save their students. Michael Patrick Halkitis puts in a strong performance as Donnie—seeming like the actor most comfortable in the skin of his character. Whereas Brendan O’Dwyer’s interpretation of Ricky is sometimes charming and puckish, he is overly fraught with mugging and over-the-top emotionally which seems to hide his character’s pain rather than reveal it.

But the writing is on the wall from the get-go and instead of giving us real insight into how the school has failed its students or what will happen to them once the bulldozers come, Holter gives us angst and David Mamet-esque, often obscene outburst of anger. While there are attempts to find humor in their darkest hour, nothing is funny here for the characters or the audience. Instead, from the first lines of the play the entire cast delivers their lines like an automatic weapon in rapid-fire, poorly articulated and overlapping speech. It is impossible to make sense of the dramatic situation or know even who is who. In addition to the speed, the lines are mostly delivered in a deafening volume. Shouting and fury is all we can see or hear—no wonder there is no way forward for these characters.

The egregious truths in this play are undeniable. It is no secret that our educational system has failed us, especially with inner city schools. But unrelenting rage is not an effective exit strategy or dramatic approach—neither provides a pathway to understanding.

The Harbinger Theatre has definitely challenged itself to bring this work to the stage. The design elements are impressive for a community theatre.  Mike McDermott’s set design is appropriately gritty and atmospheric and nicely enhanced with lighting by Nick Nealon. Add to that some exceptional sound effects by Brian Starnes and the world of the play (especially as it is nestled within an actual old school facility) and we definitely have entered the world of this play. But it must be said that the play needed a director who was not on stage, whereas Dennis Skiba plays a major role and directs as well. He moves his actors fairly well, but does not help them trust the text, to find a greater range in expression. As it is, the characters and speeches all seem like one long cry in the wilderness.

In the end, EXIT STRATEGY is a noble effort. The actors were well prepared, the crew was hard working and efficient, everyone was doing their best. Harbinger Theatre should be commended for its passion for new work and its commitment to serving its neighborhood and the larger regional community. They need support and encouragement. We do hope that this passion and vision will truly be a harbinger of (good) things to come.

EXIT STRATEGY runs Thursday through Saturday, June 16-25, 2022. All performances 7:30 p.m. Tickets are $15 and can be purchased on the EventBrite website. All teachers are eligible for $10 tickets, available at the door or by email reservation at harbingertheatrealbany@gmail.com. There will be Q&A sessions after each Friday show, and unvaccinated guests will need to wear masks.