REVIEW: “Once” at the Berkshire Theatre Group 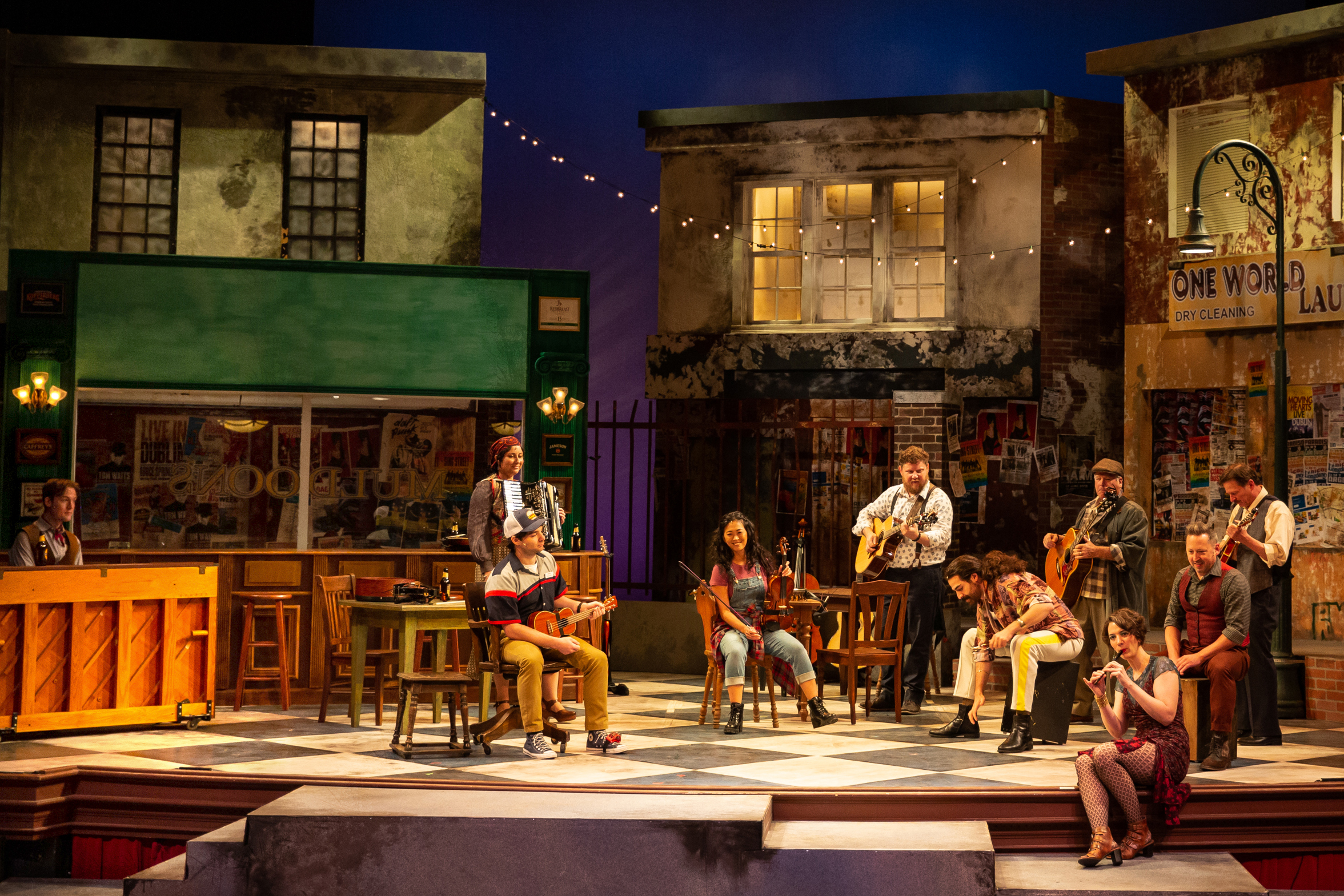 REVIEW: “Once” at the Berkshire Theatre Group

Spending time in Pittsfield’s historic Colonial Theatre is always a treat. Currently the venue for the Berkshire Theatre Group’s production of Once, the experience of soaking in the beautifully restored turn-of-the-20th-century theater is quirkily enhanced by an Irish pub alongside a stage transformed into the streets of Dublin. Populated by more than a dozen effervescent dancing actor-musicians, it’s hard to avoid being swept into the celebration.

Here’s the story: Guy (David Toole) repairs vacuum cleaners in his father’s shop by day. At night, he’s a busker, a sensitive singer-songwriter. Girl (Andrea Goss), a Czech immigrant, stops to listen. She finds herself powerfully drawn to him, and as she learns that the heartbroken musician has decided to give up on his music, beseeches him not to abandon his guitar. Over the course of a week, she steadily guides him. Girl is an inspired pianist and singer herself, and their collaboration transforms both their lives, although not quite in the way we might expect. Guy’s heartbreak is the byproduct of his girlfriend’s move to New York. Girl has taken her daughter to Dublin, away from the child’s father and a troubled marriage.

The speed at which the supremely gifted actor-musicians propel the story, thanks to Gregg Edelman’s sure-handed direction in collaboration with Andy Taylor’s music direction and Isadora Wolfe’s movement direction, is near dizzying, and the show’s energy never wavers in its full two hours, 20 minutes (with a 15-minute intermission). Taylor, not incidentally, is also a cast member.

Naturally, more than a few subplots are interwoven. The characters are so distinctive and well-honed that they’re easy to follow and fun to watch. The only snag is Girl’s upright piano, which is presented with its back facing the audience. Goss has a lovely voice, and I understand that she’s a first-rate pianist. This is an unfortunate visual distraction, as it’s such a pleasure to watch the rest of the (adult) cast play their instruments. I wish that the piano, bulky though it is, were placed differently so that could have had the pleasure of watching her play.

Otherwise, Once is visually and aurally luscious. Josafath Reynoso’s scenic design is clever and evocative. The actor/musicians move set pieces around gracefully, transforming the stage from a street corner to a pub to a banker’s office. Elivia Bovenzi Blitz’s costumes suit the players well and transmit much information about each character, from the stark and utilitarian to the explosively colorful. Matthew E. Adelson’s lighting fortifies every bit of action on stage, and Nathan Leigh’s sound design serves the show impeccably. To my delight, the various dialects were right on target, and so I must offer kudos to Resident Dialect Coach Jennifer Scapetis-Tycer.

I haven’t seen the film (yet), but it’s worth noting that Once is the only show to have music that won an Academy Award, a Grammy Award, an Olivier Award and a Tony Award. Ultimately, Once is uplifting and soulful without being sappy, despite the names given the man and woman who are the focus of the story. This production is just lovely.

To purchase tickets, visit www.BerkshireTheatreGroup.org or contact the Colonial Ticket Office by calling 413-997-4444. The box office is open Tuesday through Sunday 12pm-5pm or on any performance day from 12pm until curtain.

For all performances the house opens 1/2 hour before the show with live music and a limited cash bar serving Guinness and iced Irish coffees.