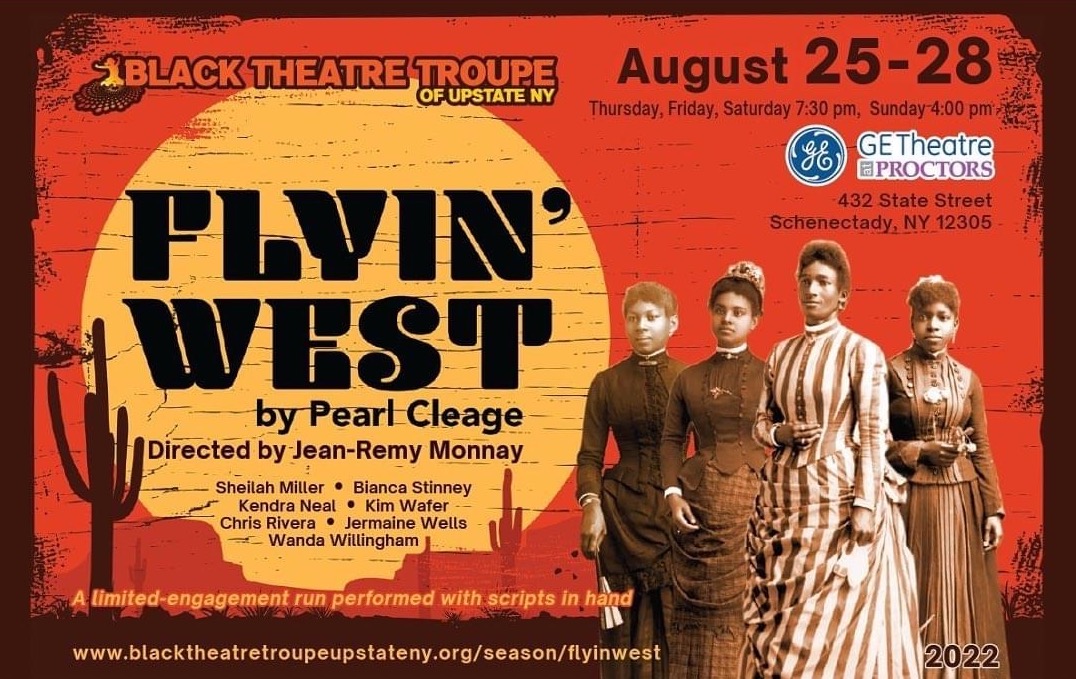 This is a limited-engagement run performing at the GE Theatre at Proctors in Schenectady. The production will be performed with scripts in hand.

“Following the end of the Civil War, many former slaves, anxious to leave the South and the increasing disappointments and dangers of Reconstruction, took advantage of The Homestead Act and went West to build new lives for themselves and their families. Many of these homesteaders were black women who overcame tremendous odds to work their own land and make a place for themselves in an often harsh and forbidding environment. Set in 1898, FLYIN’ WEST is the story of some of these African-American female pioneers who settled, together, in the all-black town of Nicodemus, Kansas. …

“Facing problems ranging from the inevitability of long, cold winters, to the possibility of domestic violence, to the continuing spectra of racial conflict, the women of FLYIN’ WEST include Miss Leah, the old woman whose memories of slavery and its aftermath comprise a living oral history; Sophie Washington, whose determination to protect her land and those she loves puts to rest forever the requirement that western archetypes be white and male; Fannie Mae Dove, the gentle sister, trying to civilize the frontier with fine china and roses, who finds herself falling in love with their soft-spoken neighbor, Wil Parish; and Minnie Dove Charles, the headstrong baby sister whose mulatto husband, Frank, introduces a danger into the household that tests their sisterhood in unexpected ways.” – https://www.dramatists.com/cgi-bin/db/single.asp?key=784&nbsp;

The Black Theatre Troupe of Upstate New York (BTTUNY) was originally founded under the name Soul Rebel Performance Troupe in 2009 by veteran actor Jean-Remy Monnay. Monnay was born and raised in Haiti, later moving to NYC at the age of 18. In 1997, he moved upstate and began to get involved in the Capital Region theatre scene. He soon discovered that there were very few BIPOC artists working in the area, and very limited opportunities for those artists to find work. The creation of Soul Rebel Performance Troupe was in response to this lack of access; it provided a home for artists of color, LGBTQIA+ actors, and other overlooked and underrepresented identities. The company was granted 501(c)(3) status in 2011, as it further committed to its mission and began to grow its performance season and outreach programs into a more vibrant array of activities. Over the years, the company’s focus became more clearly about supporting BIPOC, and predominantly Black, artists and narratives, and in 2018 the company’s name was changed to The Black Theatre Troupe of Upstate New York in order to better align with this intention. In June 2021, BTTUNY became the Resident Community Company at Capital Repertory Theatre (theREP).

MISSION: The Black Theatre Troupe of Upstate New York’s goal is to foster cross-cultural understanding and to create more diversity on stage and in theatre by highlighting, producing and promoting performance and theatre arts by marginalized artists in upstate New York. We aim to expand the cultural landscape and create a place for Artists of Color to grow and thrive.