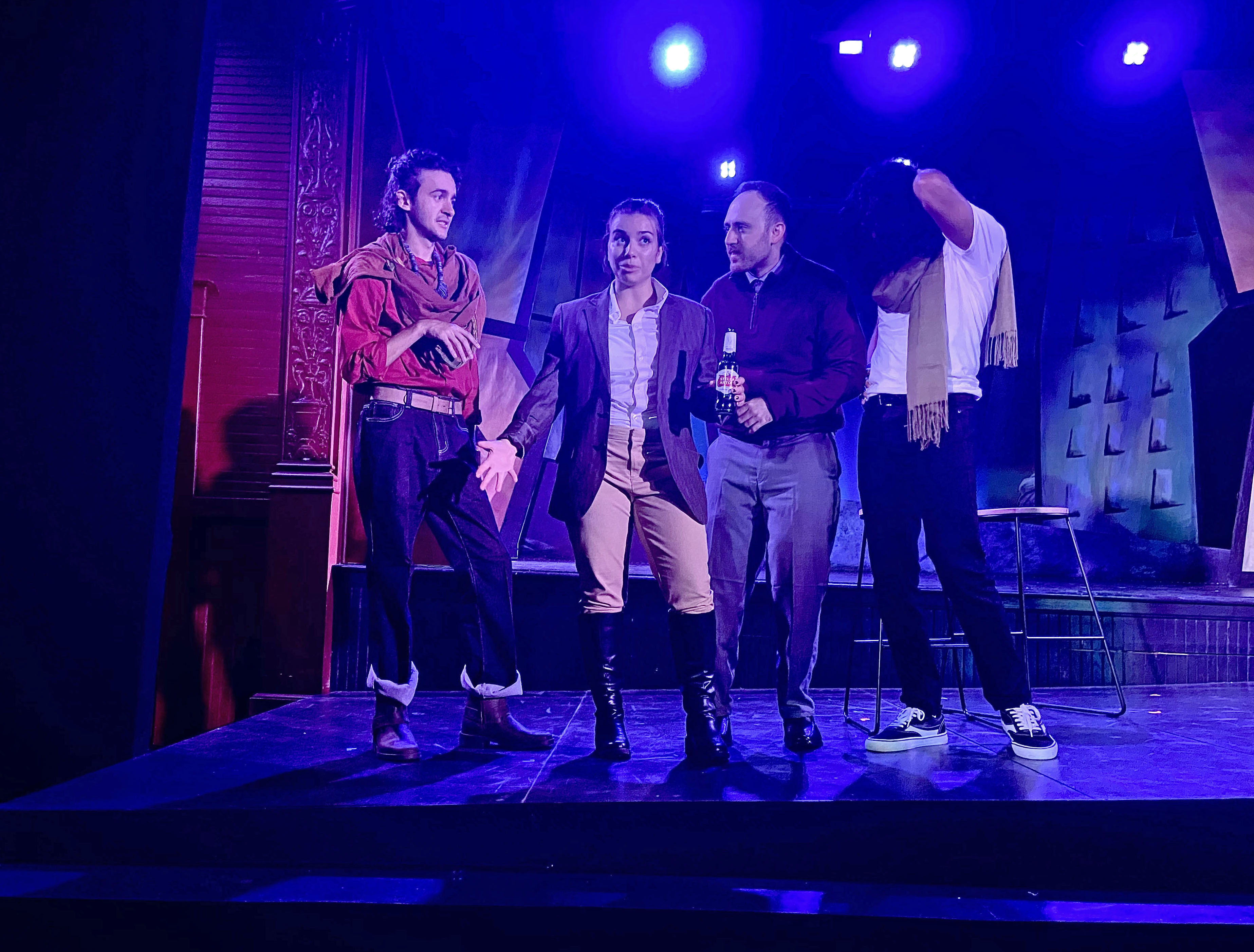 The intimate Ancram Opera House in Ancram, New York, is producing “Invasion!” by Jonas Hassen Khemiri and translated by Rachel Willson-Broyles, a play that delivers a barrage of themes, witty dialogue, questions and challenges. A talented and vibrant cast of four (Ali Andre Ali, Abuzar Farrukh, Sophie Zmorrod Laruelle, Ahmad Maher) play multiple roles as they explore the story of “Abulkasem.” One of the questions is “Who or what is Abulkasem?”

Mr. Khemiri has created a work that entertains, fascinates and repels his audience.  Many controversial topics are touched upon including ethnicity, immigration, and the art of communication, some of which is hilarious and some snide.

After a series of unrelated scenes and monologues the play moves toward a structured direction in which Abulkasem is introduced.  Is he (or she) real?  Is he/she an uncle from Lebanon, a famed female theatre director, an immigrant apple picker, an international terrorist or all of the above? Is one of the characters we meet as Abulkasem simply an imagined creation?

The play begins with a scene from a Swedish classical drama entitled “Signora Luna” in which the name “Abulkasem” is first used.  From there it is a nonstop onslaught of broadly comic scenes featuring two high school students, a dysfunctional family, a flirtation in a bar followed by satirical vignettes of a panel discussion regarding the infamous Abulkasem, a gathering of college students in a comically pedestrian conversation, and the aforementioned apple picker who wishes to speak to an American audience in his native Lebanese.  He is accompanied by an interpreter who tends to give her own politically inflammatory translation to his comments. She delivers a diatribe which, if you are a Jew, would be provocative; however, it is in the context of the play’s thematic intentions.

The son of a Tunisian father and a Swedish mother, Khemiri has insight into two worlds… Arabic and western.  He uses this theatrical platform to examine the similarities and differences in the relationship between these cultures.  His play both defends and criticizes.  He also dramatizes the obstacles immigrants  to America have to face.  This sounds like a swirl that might be difficult to follow and comprehend, but his writing, though sometimes frenetic, often direct, and frequently subtle, takes you through myriad events culminating in a touching monologue that brings all the threads together.

This is a beautiful example of an ensemble cast that works deftly to bring life to their various characters. Mr. Ali is charming as an immigrant uncle and a standard “show biz” type as the coordinator of the panel discussion. Mr. Farrukh and Mr. Maher are terrific as obnoxious high school students. Farrukh is also a wonderfully sleazy, pick-up artist and Maher delivers that sensitive final monologue. Ms. Zmorrod Laruelle is one of the group of smugly competitive college students; she is also the prejudiced interpreter. Not only do they change characters and costumes, but their faces seem to alter with each protagonist.

The director, Jeffrey Mousseau, has mounted the production using every inch of the stage and some of the down front aisles.  Actors speak directly to audience members bringing all of us into the play.  All the characterizations are specific whether stereotypes (of which there are several) or unique. The pacing is electric requiring the audience to listen harder.  Though a hodge-podge of ideas and moments, the work flows smoothly and inexorably toward its final moments.

Sarah Edkins’ set consists of  various platforms with set pieces that slide in and out.  The minimal furniture is quickly moved by the cast.  The palette is basically neutral with a splash of an occasional color.  The lighting by Jess Elliot clearly focuses attention on those scenes that take place in the corners of the stage and then quickly widens to encompass the whole playing area.  The various costumes by Rashida Nelson are colorful and/or quickly identify the characters’ personality or social standing.

“Invasion!” is a true theatrical experience by a small company that brings life and excitement to an ambitious piece of work.