REVIEW: “Next to Normal” at the Mac-Haydn Theatre 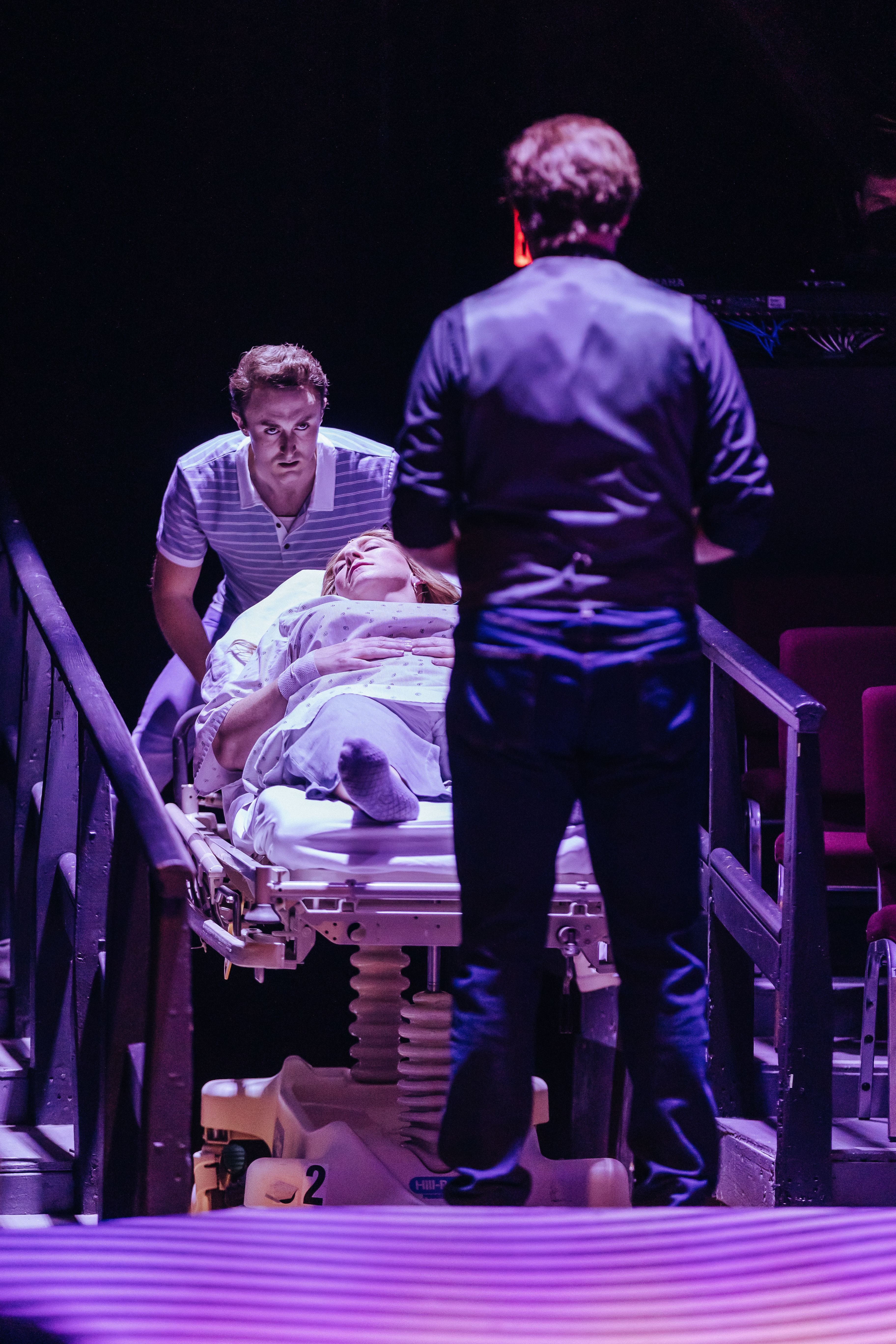 REVIEW: “Next to Normal” at the Mac-Haydn Theatre

Bravo to the Mac-Haydn Theatre for daring to produce Next to Normal as part of their busy summer season schedule!  Imagine a musical about mental health alongside a lineup including A Chorus Line, Urinetown, Kiss Me Kate, The Full Monty, Xanadu and Forever Plaid.  Undaunted, Artistic Director/Director John Saunders has shepherded an exceedingly gifted cast and crew in a moving, sensitive, haunting production that will not soon be forgotten by those who are fortunate enough to see it.

Next to Normal, with music by Tom Kitt and book and lyrics by Brian Yorkey, premiered at off-Broadway’s Second Stage Theatre in 2008, moving to Broadway the following year, where it won three Tony Awards and earned the Pulitzer Prize for Drama.  The show tells the story of Diana Goodman (a brilliant Beth Kirkpatrick), her struggle with chronic mental illness, trauma, loss, and radical medical treatments, and their toll on her and her family. Remarkably, these disturbing events are basically sung throughout–a modern-day opera.

The Mac-Haydn Theatre’s willingness to expand their horizons is evidenced in many positive ways.  Discussing his choice of material in the program, Saunders takes a cue from Hamlet’s advice to the Players:  “While some may not consider it ‘Summer Stock’ fare, I believe the show magically does what theatre is intended to do; it holds up a mirror for the viewer and offers an incredibly truthful look at a real family facing very real issues.”  Other recent alterations at the Mac include the increased size of the stage, the seating arrangement, the addition of a separate, enclosed scene shop and the seats themselves, plush and newly installed this winter.

In the past, the Mac’s musicals were performed in the round by large casts on a tiny, postage-stamp stage, so that their fast-moving, dynamic choreography was a miracle in itself.  Now, one of the seating sections has been removed, affording the Set Designer, in this case Emma Cummings, the opportunity to construct her set on a thrust stage with the audience on three sides.  Cummings has created a quasi-kitchen, using wooden shelving, a metal cart, and hollowed out cubes, rather than standard kitchen appliances.  The one realistic element is an actual, prominent toilet.  Mention should also be made of that interesting wavy design on the stage floor—an indication that things are off kilter?  Offstage aisles are still used for exits, entrances, and various scenes, as they always have been.

Other exciting past practices remain as well:  a myriad of lights, colors and innumerable special lighting effects (Andrew Gmoser); dozens of quick costume and wig changes (Bethany Marx and Caitlin Maxwell, respectively); all kinds of props, including a large hospital bed (David Tankersley) and two different inventive piano simulations; and a fabulous live band conducted by Eric Shorey (pianist), including bass, percussion, guitar, cello and violin.  The score moves from classical to contemporary rock, encompassing various genres in between.

Saunders keeps the action moving at a heightened pace with performers coming and going from every part of the theatre but also allows the actor/singers the time they need to fill the most poignant moments.  The difficult vocal demands of the music are met by the strong, expressive voices of each member of the cast.

From the opening number to her dramatic final exit, Beth Kirkpatrick’s Diana commands the stage, taking the audience with her on an emotionally-wrenching journey.  Her impressive voice and presence convey her frustration and sadness as she goes from doctor to doctor for answers they cannot give her.  Eric Van Tielen is her extraordinarily patient and loving husband Dan, whose sweet tenor voice and demeanor underline his helplessness and vulnerability in the face of Diana’s rage and suffering.  Kylan Ross and Amber Mawande-Spytek portray their children, Gabe and Natalie, whose unmet needs for attention ring out in their resounding voices and actions.  Andrew Burton Kelley’s Henry, boyfriend of Natalie, finds himself in a similar position to her father—dealing with a woman he desperately loves and tying himself in knots trying to persuade her to accept him.  Finally, the longtime veteran of the Mac, Gabe Belyeu, outdoes himself playing Diana’s two doctors, who couldn’t be more opposite— robotic, pill-prescribing psychopharmacologist Dr. Fine and “rock star” Dr. Madden, who, despite his wild persona, cares deeply about his patient.  Exceptional performances, all.

This exquisite production should provide an impetus for all the theatres that dream of taking risks but haven’t yet found the courage to do so.

NEXT TO NORMAL runs from August 4—14 at the Mac-Haydn Theatre.  Tickets may be purchased by calling 518-392-9292 or online at www.machaydntheatre.org.