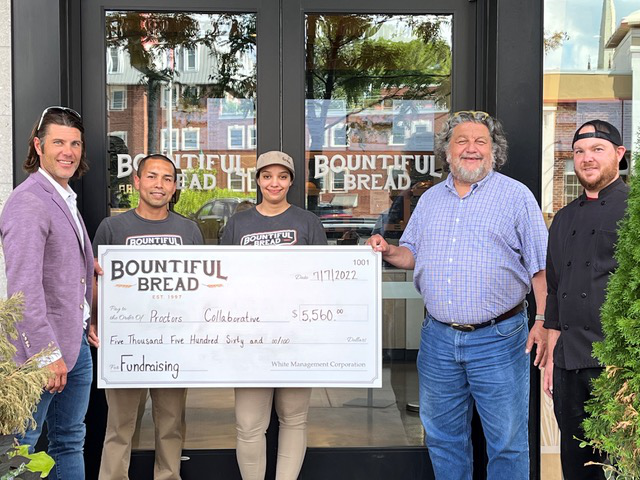 Bountiful Bread and Annabel’s Pizza Co. donations to Proctors Collaborative—the Capital Region’s destination for Broadway shows, film, and special events—were raised during their Grand Opening Celebration event in May. The complimentary event, which showcased food stations in four different venues at Frog Alley, raised $2790 for Proctors via direct donations, a grand raffle, and gift certificate sales. Those funds were matched by the White Family Foundation on behalf of White Management Corporation.

“One thing we love in our business is connecting with, and supporting, the local community,” said Brian White, President of White Management Corporation, a privately-held restaurant group in upstate New York. “Proctors Collaborative enriches the greater Albany community in a number of ways, from hosting Broadway shows that bring business to the area, to children’s dance recitals that spotlight kids like my nine-year-old daughter. Proctors is a local treasure that we are honored to support.”

The new restaurants are in residence at Frog Alley Brewing Company, a renovated industrial space with exposed brick walls, high ceilings, and large windows looking out onto historic Schenectady. Bountiful Bread-Schenectady is the second location for the scratch bakery that opened in Stuyvesant Plaza in 1996, serving sandwiches, salads, soups, and a variety of cookies, cakes, cupcakes and pastries. Bountiful Bread-Schenectady offers a variety of seating areas for customers: outdoor street-side tables, interior bar seating with natural light, and interior tables and booths. Annabel’s Pizza Co. sits right next door, filling a space large enough to house an Italian-made wood-fired oven in the kitchen, and a small seating area out front. Annabel’s is the exclusive food provider for Frog Alley Brewing. Bountiful at Frog Alley Catering (formerly Mill Artisan District Events) operates out of the shared space, producing catered meals served in various rooms at Frog Alley, and in private homes and businesses. Frog Alley venues include a windowed atrium and loft area for formal celebrations, an outdoor patio, and a downstairs bar. Parking for the restaurants is available directly out front on State Street (short-term for pick-up), directly behind the building in marked spots, and in two overflow back lots.

Proctors was established in 1926 as a theater showcasing vaudeville acts, movies, and performances. It was named to the National Register of Historic Places in 1980. Today, Proctors Collaborative showcases theater, film, festivals, and performances in Schenectady, as well as in theaters throughout the Capital Region and Saratoga.

“Nothing is better than being part of our thriving downtown. Bountiful and Annabel’s are great neighbors and partners, and we are grateful that they honored us in this way!” said Proctors CEO Philip Morris.

White Management Corporation is a privately-held restaurant group which owns and operates thirty+ quick-service and full-service restaurants in upstate New York. The company was founded in 1967 by David White, and is now run by his son Brian. For more information, visit www.whiterestaurants.com, bountifulbread.com, annabelspizzaco.com, and bountifulatfrogalley.com.