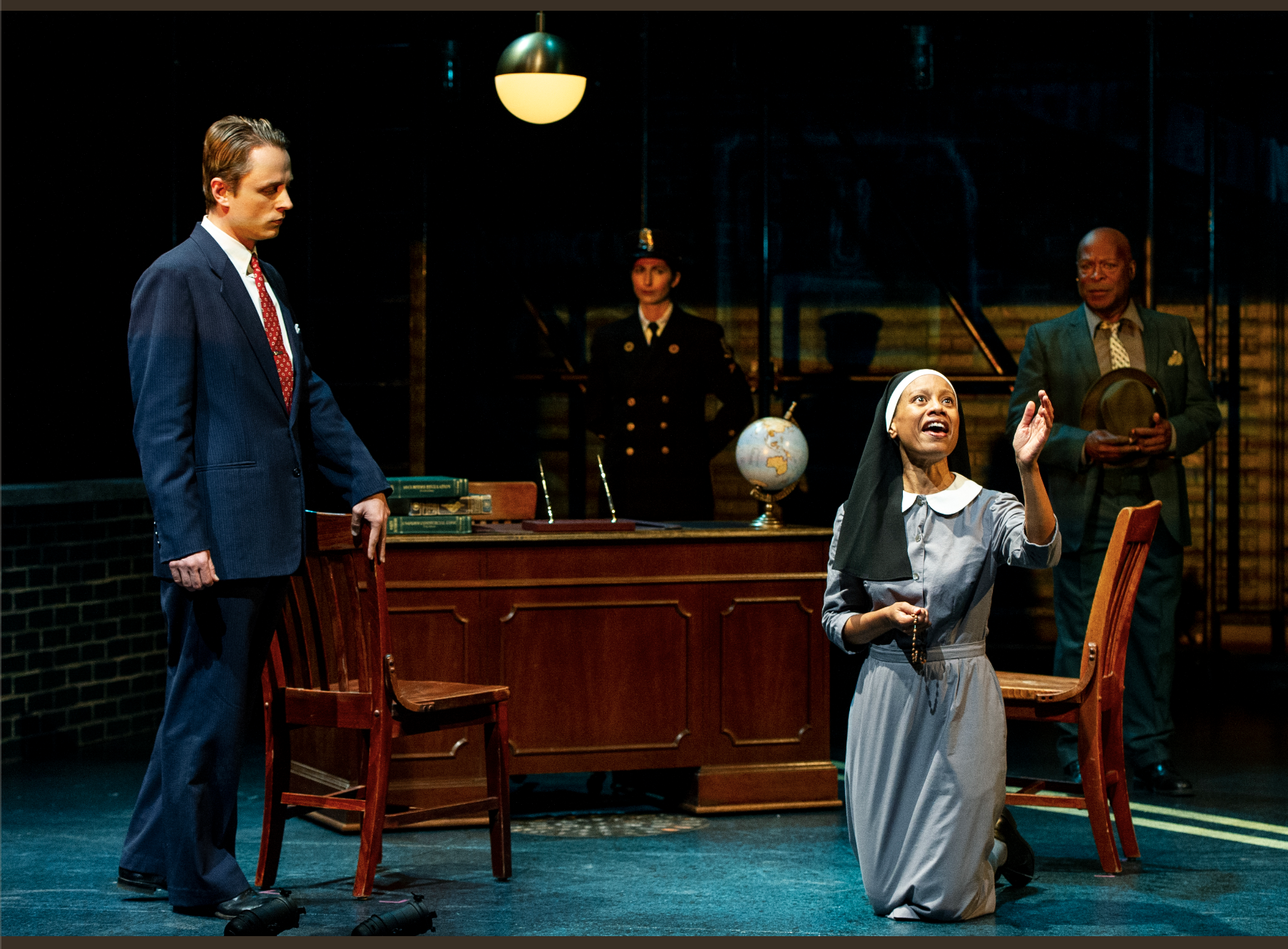 Shakespeare’s Measure for Measure, now being staged at Shakespeare & Company’s Tina Packer Playhouse, is known as a “problem play.”  Neither tragedy nor comedy, it lives somewhere in between, which is probably why it is rarely produced.  But this Lenox company ended up with more problems than they bargained for.

The title of the play comes from the Gospel of Matthew (7:1-2):  “Judge not, that ye be not judged. . . For with what judgment ye judge, ye shall be judged: and with what measure ye mete, it shall be measured to you again.”  Here’s how this doctrine applies to the plot:  Duke Vincentio of Vienna has not been enforcing the laws of his city, allowing sexual license and immorality to flourish.  He appoints his Deputy, Angelo, to temporarily replace him, knowing that Angelo will revive the old laws and bring order to Vienna.  Meanwhile, the Duke disguises himself as a Friar, observing how Angelo conducts himself and how the people respond. Rigid and severe, Angelo orders seducers to be put to death by beheading, including one Claudio, who is contracted to marry Juliet, now pregnant.  Claudio begs his sister, Isabella, as she prepares to enter a convent, to plead with Angelo to spare him.  Angelo, lusting after Isabella, offers to reverse the sentence if Isabella will sleep with him.  The Duke/Friar must untangle this situation, punishing the wrongdoers and saving the innocent.

So it seems that all is well by the play’s end.  But these characters hardly ever  react in expected ways and that’s what makes the play problematical.  Consider the conversation between Isabella and her brother in his prison:  Isabella is sure that Claudio will agree with her, preferring to die rather than asking his sister to give up her chastity to save him.  Instead, he begs her “Sweet sister, let me live,” arguing that her sin would be considered a virtue in this case, to which Isabella replies:  “”O you beast! O faithless coward! O dishonest wretch!” accusing him of incest because he would be taking life from his sister’s shame.

Or consider Barnardine, a drunk and dissolute prisoner who does not care if he lives or does, yet, when threatened with immediate beheading absolutely refuses, saying “I will not consent to die to-day, that’s certain,” thus foiling the Friar’s plot to substitute his head for Claudio’s.

Or consider the behavior of the Duke, who seems to be a fair ruler, meting out justice with mercy when he finally resumes his position in the final act.  He pairs sinning males to the women they abandoned, creating marriage-bound couples (Shakespeare’s comedies usually end in weddings), but cruelly insists to Isabella that her brother is dead, though that is false.  Finally, the ending of this play is indecipherable:  the Duke seems to propose marriage to Isabella.  How can that be when she is on her way to becoming a nun?  Is this justice? Is he no better than Angelo?  And how does she respond without any words given to her in the script?  That is another challenge for every director who takes on this difficult play.

Director Alice Reagan, who talks in the program of this “tightly plotted, suspenseful story of a city where ruthlessness reigns, and justice is hard to come by,” does an excellent job of accomplishing this.  The play moves quickly, focusing on the major plot and eliminating scenes and characters that don’t further the action.  Her use of physicality is especially effective in the scenes between Isabella and Angelo (with the help of an Intimacy Choreographer).  However, some of her choices can be as problematic as the play.  For example, Reagan has decided to cast a woman as the Duke (Ariel Bock), changing all references from “him” to “her.”  And though she talked (in an interview with The Berkshire Eagle) about wanting to explore how women handle positions of power, there isn’t much difference from the way corrupt men do, but it makes the Duke’s proposal to Isabella even more confusing than it already is.

Instead of Vienna, Reagan changed the setting of the play:  “Vienna by way of Harlem USA, the 1950s,” which she claims to be “another milieu of glorious debauchery, drenched in music and style,” but she curiously neglects to omit the play’s references to Vienna.  She is right about the advantages this gives to the designers:  Set Designer Edward T. Morris creates a wonderful multi-level set with a balcony, a staircase (serving as seating for actors), a ladder for climbing, half-walls for hiding, a bench under a streetlight and a trap door that opens to begin the production; Sound Designer Caroline Eng provides musical selections that bring Harlem alive between scenes and Costume Designer Govane Lohbauer must have had a ball designing those 1950s costumes. Light Designer Marika Kent keeps the lights dim in accordance with Reagan’s concept for this dark play.

There are several spectacular performances: best of all is Nehassaiu deGannes, playing the double role of Isabella and Pompey (a pimp). This highly intelligent actress delves deeply into Isabella’s mind, understanding the urgency for her to speak out for justice in her accusation of Angelo, as uncomfortable as that might be, before she enters her order and can no longer speak in public.  For deGannes the play “turns on the notion of heart and habit” (interview in The Berkshire Eagle). As for her characterization of Pompey, she deftly captures the pimp’s swaggering.  Next comes Lucio:  the scene-stealing (in the finest sense) Charls Sedgwick Hall, who excels at physical farce and comic timing.  We look forward to his every entrance.

David Gow’s Angelo, especially in his scenes with Isabella, is crystal clear in his lust, corruption and the power-hungry abuse of his position, mirroring our world today. Mention must be made of the two women who portray multiple characters: Ally Farzetta shines as Mariana, Angelo’s abandoned fiancée, and the Provost in policewoman’s uniform, who tries to mitigate Angelo’s evil.  Indika Senanayake miraculously transforms herself from Mistress Overdone, a cheeky madam, to Juliet, Claudio’s beloved, to Barnadine, so completely that she is impossible to recognize in her different incarnations.

Finally, the problems that beset this production the weekend of August 26-28 stem from the unfortunate withdrawal of Ariel Bock, who was unable to perform.  Rory Hammond, formerly cast in two relatively minor roles, was enlisted to play the Duke herself.  This was a mistake, though Hammond was courageous to take it on.  Besides being too young for the role, she had script in hand for the entire performance, often missing the sense of the Duke’s monologues.  She fared better as the Friar, the Duke’s alter ego, whose lines are shorter and clearer. Ellie Bartz, an understudy who took on the roles originally assigned to Hammond, had more success, although she too read from the script.

Despite these regrettable circumstances, this production has much to offer and is well worth seeing.

MEASURE FOR MEASURE runs from August 19—September 18 at The Tina Packer Playhouse.   Tickets may be purchased by calling 413-637-3353 or online at SHAKESPEARE.ORG.