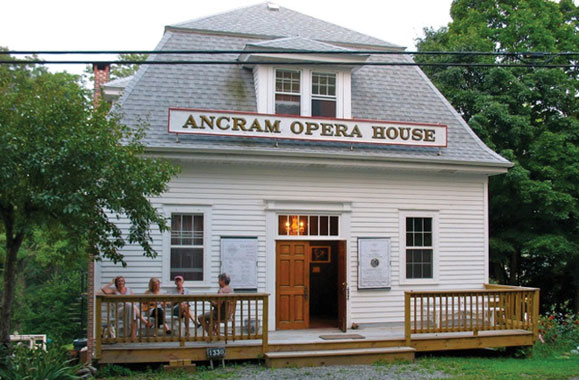 “We are excited to welcome audiences back to the Opera House for our fall season which includes a highly anticipated revival of Emily Mann’s Obie Award-winning documentary play, Still Life,” says Paul Ricciardi; with Jeffrey Mousseau adding, “the project extends an examination of war and its impact on all of us which we initiated last season with our acclaimed production of An Iliad.”

The fall season opens with STILL LIFE by Emily Mann, directed by Jade King Carroll, in a co-production with the New York City-based Playhouse Creatures Theatre Company, on September 30-October 9 at the Ancram Opera House. Tickets are $35.

STILL LIFE is a searing and revealing documentary play about the immediate aftermath of the Vietnam conflict on a former marine, his wife, and his mistress, gleaned from interviews and refined to illuminate the post war experience. The play provides a poignant snapshot of America in the turbulent 1970s–a country in the throes of an unpopular war abroad and social upheaval at home. STILL LIFE is generously sponsored by Manon and Ian Slome.

This fall, AOH artists are once again leading storytelling workshops with all 4th, 5th and 6th graders at Taconic Hills Central School modeled on the REAL PEOPLE REAL STORIES approach, helping each of the more than 300 students to develop and tell a story about a memorable event in their life. On Saturday, November 5 at 2pm students’ stories will live streamed free from the AOH stage. Reservations are required in order to receive a link to this virtual event.

Thursday, Fridays, and Saturdays at 7p

Jeffrey Mousseau is co-director of the Ancram Opera House and an award-winning director (2018 Berkshire Theatre Critics Award, Homebody). With AOH, he has directed Invasion!; An Iliad, which he re-staged at Shakespeare & Co. in June; The Snow Queen; Aunt Leaf, subsequently presented in Aguascalientes, Mexico; Homebody; We’re Gonna Die; and In Praise of Elephants. His directing credits include a residency at the John F. Kennedy Center for the Performing Arts. His work has been seen at HERE in NYC; Olana, where he conceived and directed a site-specific new work; Hudson Opera House; and Stageworks/Hudson. As Artistic Director of the Elliot Norton and IRNE award-winning Coyote Theater in Boston, he directed many productions over the course of his ten-year tenure. Guest artist/lecturer: Brandeis University, Emerson College, The University at Albany, Siena College.

Paul Ricciardi is co-director of the Ancram Opera House and teaches the theater’s acting and voice classes. He is an Associate Professor on the theatre faculty at the City University of New York/Kingsborough CC. Previously he taught at Siena College, The University at Albany, and Rhode Island College. He is Immediate Past Co-Chair for Region I of the Kennedy Center American College Theatre Festival, and a two-time recipient of the Kennedy Center National Teaching Artist Award. He received his MFA in Acting from Trinity Repertory Company, and studied with renowned vocal coach Kristin Linklater, receiving his Linklater Teacher Designation in 2012. Paul is also a director and voice/speech/dialect coach.  Paul has designed dialects for countless college theatre productions, as well as for professional theatres including Stageworks/Hudson, WAM, America-in-Play, and others.  Memberships:  AEA, VASTA.

Emily Mann is a multi-award-winning theatre director and playwright. In her 30 years as Artistic Director and Resident Playwright at McCarter Theatre Center in Princeton, New Jersey, she wrote 15 new plays and adaptations, directed more than 50 productions, produced 180 plays and musicals, supported and directed the work of emerging and legendary playwrights, and received the Tony Award for Outstanding Regional Theatre. Her plays include: Having Our Say, adapted from the book by Sarah L. Delany and A. Elizabeth Delany with Amy Hill Hearth; Execution of Justice; Still Life; Annulla, An Autobiography; Greensboro (A Requiem); Meshugah; Mrs. Packard; and Hoodwinked (a Primer on Radical Islamism). Her play, Gloria: A Life about the legacy of Gloria Steinem, ran Off- Broadway and aired on PBS’ Great Performances. On Broadway, she has directed her plays Execution of Justice and Having Our Say as well as Nilo Cruz’ Anna in the Tropics and Tennesse Williams’ A Streetcar Named Desire. Among her many awards, Ms. Mann has received six Obies, a Guggenheim; a Tony, Drama Desk, Outer Critics Circle and was recently inducted into the American Theater Theater Hall of Fame.

Playhouse Creatures is a NYC-based, mission-driven, off-Broadway theatre company dedicated to strengthening the legacy of the American theatre, while serving the communities where they produce (both on and off stage). Since 2009, PCTC has produced 15 mainstage productions, seven new works series, 29 staged readings, four Tennessee Williams festivals, a world premiere of a Tennessee Williams play (The Recluse and His Guest), and several NYC premieres. PCTC has won and been nominated for 21 theatre awards, and received The Nazareth Housing 2018 Community Service Award.

ABOUT THE ANCRAM OPERA HOUSELocated in southern Columbia County, the Ancram Opera House presents a mix of contemporary theatre, alternative cabaret, and community programs. Located in a converted former grange hall, AOH offers audiences a unique opportunity to directly engage, up close, with visionary theatre artists at the top of their field who are rarely seen in our region. For more information visit www.ancramoperahouse.org.