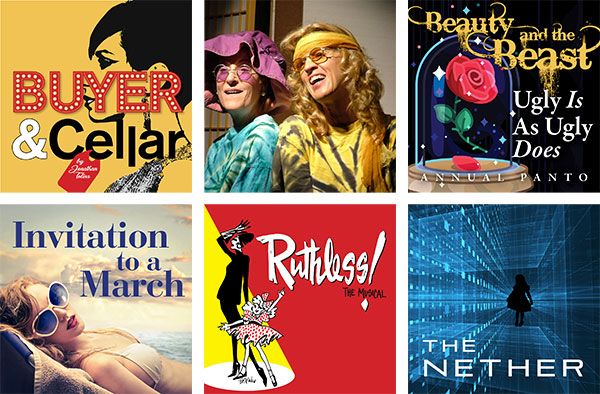 [GHENT, NY] – The Ghent Playhouse is thrilled to announce its exciting lineup for the 2022-2023 season. Kicking off the 48th year is the one-man comedic play “Buyer & Cellar,” starring Sam Reilly. November 13 is a one-show-only benefit performance of “Aged to Perfection,” with Alaina Warren Zachary and Lisa Carman. Up next is “The Annual Panto – Beauty and the Beast: Ugly is as Ugly Does.” The romantic comedy “Invitation to a March” brings in the new year, and is followed by “Ruthless! The Musical,” an uproarious spoof of iconic Broadway classics. Closing out the season is “The Nether,” a twisting crime drama and haunting sci-fi thriller. The Ghent Playhouse is located at 6 Town Hall Place in Ghent, NY.

Each production will run three consecutive weeks: Friday and Saturday at 7:30pm and Sunday matinee at 2:00pm. Tickets are available online only: $23 for members, $28 for nonmembers, and $12 for students. Tickets and memberships can be purchased at GhentPlayhouse.org with no additional processing fees.

“We’re thrilled to be back with a full theater season that promises to be exciting, fun and thought-provoking. There’s something for everyone,” said Artistic Director Cathy Lee-Visscher. “While we will no longer require proof of vaccination, in our efforts to ensure the safety and enjoyment of our audience members, we will continue to require that masks be worn throughout all performances this season.”

Buyer and Cellar
October 7-9, 14-16, 21-23, 2022
This outrageously funny and irresistible one-man play from the most peculiar of fictitious premises—a struggling L.A. actor takes a job working in Barbra Streisand’s Malibu, California basement—makes for some delicious wit and insight on the solitude of celebrity, the love-hate attraction between gay men and divas, and the melancholy that lurks beneath the narcissism. Sam Reilly stars in this endearing, one-man comedy in which he portrays all of the characters, including Barbra Streisand. Written by Jonathan Tolins. Directed by Cathy-Lee Visscher.

Aged to Perfection
One show only: November 13, 2022
This funny musical revue includes surprise guests, audience participation, giveaways, and major comic mayhem. Written and performed by multi-award winners Alaina Warren Zachary and Lisa Carman. This is a pay what you can event to benefit The Ghent Playhouse. Seating will be limited, so order tickets early. (Suggested donation $28. More if you can, less if you can’t.)

The Annual Panto – Beauty and the Beast: Ugly is as Ugly Does
November 25-27, December 2-4, 9-11, 2022
Join the hilarious “Loons,” as they tell their version of the famous fairytale about a not-so-nice prince who is doomed to an “ugly” life alone, unless he can find someone to love him for what he is. Written and directed by Cathy Lee-Visscher

Invitation to a March
February 3-5, 10-12, 17-19, 2023
While brimming with expectations of married life, the approaching reality puts a young bride-to-be to sleep whenever she’s around her rich, responsible fiancé. With overtones of a famous fairytale, it is when kissed passionately by an unshackled, unambitious plumber that she awakens to the possibility of adventure, igniting a battle between the two families and two of the permanent residents who become entangled in their lives. Written by Arthur Laurents. Directed by J. Peter Bergman.

Ruthless! The Musical
April 14-16, 21-23, 28-30, 2023
Talented 8-year-old Tina Denmark has always dreamed of being on the stage. She can do it all!  But just how far will she have to go to get the lead in her school play? This uproarious musical spoofs iconic Broadway classics from “Gypsy” to “Mame,” and films from “The Bad Seed” to “All About Eve.” Book and lyrics by Joel Paley. Music by Marvin Laird. Directed by Michael C. Mensching and Michael McDermott. Musical Direction by Joanne Mensching.

The Nether
June 2-4, 9-11, 16-18, 2023
In this Sci-Fi crime drama, a detective investigates a virtual reality site where taboo acts of secret desires are blurring moral boundaries. She soon finds herself in a battle of wills with a charismatic suspect and wrestles with the question, “Is there a crime if bodies are virtual and blood is just bits of computer code?” Written by Jennifer Haley. Directed by Patrick White. Please note: This play contains adult subject matter.