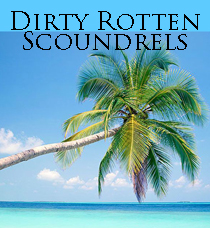 The Broadway season runs from September through May for one reason and one reason only: it was too hot to open or even run shows in New York City in the summer months in the days before air conditioning. Now shows run year round, but the official “season” is still confined to the cooler months. Here in the Berkshires its the reverse – the season runs from May to October with the highest level of activity occurring in July and August – and so smaller companies usually stay out of the rat race and present during the academic year.

Class Act Productions has tempted fate twice by opening a show in the summer in an unairconditioned house. Why??

Notice that I haven’t even mentioned the title of the show yet? That’s because it really doesn’t matter what you put up under those conditions, actors and audience alike are guaranteed to be miserable.

This is a real pity because “Dirty Rotten Scoundrels” is a fun show and this is a decent amateur production. In the right house it could have really sparkled.It runs July 25 -August 5, 2012 at Russell Sage.

Nothing is out of bounds in Jeffrey Lane’s exquisitely tasteless book based on the 1988 film of the same title starring Steve Martin and Michael Caine, which in turn was based on a 1964 film Bedtime Story starring David Niven, Marlon Brando, and Shirley Jones. Scoundrel number one, Lawrence Jameson (Eric Shovah), whose well-honed con depends on a very suave, debonair and pseudo-British panache, meets scoundrel number two, Freddy Benson (Sean Patrick Fagan), a young American who, as Lawrence says, makes up in vulgarity what he lacks in taste, at Beaumont sur Mere on the French Riviera. Lawrence has just bilked a hefty sum from insecure and naïve Muriel Eubanks (Carolyn Coogan) who continues to hang around in the conviction that someone will find a use for her in Act II. That someone turns out to be Andre Thibault (Michael Ciaravella), the chief of police and Lawrence’s lacky. After Freddy helps Lawrence ditch a psychotic and determined Oklahoma oil heiress, Jolene Oakes (I saw Christine Meglino, but those of you attending after reading this review will see Sarah Sutliff), the two enter into a friendly competition to see who can be the first to con $50,000 from Christine Colgate (Heather D’Arcy), the American Soap Queen.

Shovah and Fagan work and play together on and off stage, and they wisely selected this show as their next tandem vehicle. My only quibble was that Shovah isn’t given enough opportunity to dance, but Fagan gets to show off his acting, singing, and gymnastic abilities to full advantage here. He has toured as a clown with Ringling Brothers and Barnum and Bailey Circus. D’Arcy and Meglino have crafted some ambitious choreography, which these guys perform with panache but which is quite challenging for the boys and girls in the chorus.

Director Brian Avery has assembled a diverse singing/dancing ensemble to support his principals. I was aware, as I watched these fearless amateurs stretch their talents, how very closely matched physically your average chorus line is. Here were fine dancers of all different heights, weights, and colorations (granted chorus members often wear matching wigs to account for differing hair color) and even though they were marking time well and executing the steps with precision, they could not form a visual cohesive whole. Which begs the question, do they need to? Just because we are used to being presented with anonymous matching cookie-cutter chorus lines doesn’t mean they are the best or only way to go.

This is my second visit to Class Act Productions, and I am enjoying getting to see the work of many of the Capital Region theatre artists whose names I know only from press releases and audition notices. Fagan I had seen before, but Shovah, and female lead Heather D’Arcy were new to me and I was most impressed. D’Arcy is a real pro on stage with a great set of pipes and a winning presence. Coogan and Meglino also showed impressive singing ability, although they lacked some of the pizzazz of D’Arcy.

I was also impressed that the company fielded a seven piece pit band, all but one of whom sounded great under the baton of Linda Zannitto. I will not mention which instrumentalist was so painfully out of tune, but I hope the problem can be improved or removed before the second weekend of performances. Many professional companies in this region have mounted full scale musicals with only two pianos in the pit, so CAP is to be commended for bringing a lusher, fuller sound to their endeavors.

On a smaller stage, in a smaller house, at a reasonable temperature, this would have been an intimate and hilarious production. Avery’s flexible set would haven’t been dwarfed and his lighting design wouldn’t have had swathes of shadow into which unsuspecting performers often stumbled at crucial moments. I saw a near perfect production of this show back in 2009 on the miniscule stage at the Theater Barn, which proves that size doesn’t matter, and wonder why CAP didn’t use Sage’s James L. Meader Little Theatre instead of the Schacht. I see their next production, the even smaller scale Assassins is scheduled Ocober/November for the Schacht as well. College will be in session then, which may dictate what space CAP can use, but I worry that that little musical will be completely swallowed up in there. At least air conditioning won’t be a concern…