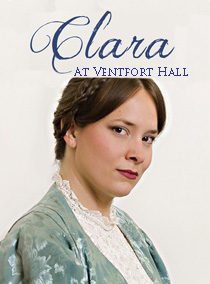 Review of “Clara” at Ventfort Hall, Lenox through September 2
by Gail Burns and Roseann Cane

Clara is Written and Directed by Mary Guzzy and features Sarah Jeanette Taylor in the title role.

Gail Burns: Many people look forward to the summer show at Ventfort Hall Mansion and Gilded Age Museum in Lenox because it always focuses on a woman of the Gilded Age, and usually one with some Berkshire ties.

I have been saying all summer that we need to hear the stories of strong, intelligent women now more than ever, so even though she has no link to the Berkshires I was really glad to hear that this summer’s show would be about celebrated 19th century pianist and composer, Clara Wieck Schumann.

Roseann Cane: Although Ventfort Hall wasn’t built until 1893 (for Sarah Morgan, sister of J.P.), it serves as a lovely home for Clara. The library provides an evocative setting for the story of the remarkable Clara Schumann (1819-1896), one of the most acclaimed pianists of the Romantic era. She was, in fact, famous long before she married then-unknown Robert Schumann.

Gail: Each Ventfort play has introduced me to the story of a woman I knew little to nothing about previously. At least I had heard of Clara Schumann, but I hadn’t known that she was a more famous musician than her husband.

Roseann: Clara, who publicly performed at the age of nine and made her formal debut at 11, played music from memory, something rarely seen at the time. She studied with her musician father Friedrich Wieck, a strict and cruel teacher who managed her tours through Germany, France, and Austria during a period when women who were not singers just did not perform in public. She was also a prolific composer; sadly, much of her work remained unknown until the later 20th Century. None of her (known) compositions date after 1853.

Gail: I learned all this and much more during the 90 minutes of the show, but I came away thinking “Gee that Clara Schumann was an fascinating woman. Someday I’d like to see a play about her.” This was much more of a “tell” than a show. It felt like a lecture delivered in period dress.

Roseann: Exactly. What made Clara, Clara? I didn’t get an answer from this profoundly flawed play. I never sensed her essence, her creative impulse, why music was her life. Toward the end of the play, she exclaims, “I want to live my love through music!” and “This is the great love of my life through which all other love is born!” These sudden revelations are nonsensical. Fish gotta swim, birds gotta fly, and artists gotta create. I cannot believe this creative genius produced for much of her life simply because her father forced her, or because she loved her husband, or needed to support her family. Playwright Mary Guzzy has chosen to present Clara Schumann as an artiste manqué for most of her life. Clara would never have accomplished what she did had she been sublimating, or putting herself on hold to fulfill the needs or demands of others.

Gail: Guzzy only told Clara’s story up until the time of her husband’s death in 1856 and presented her solely in conjunction with the men in her life: her father, her husband, and Johannes Brahms, who was certainly a close friend and may have been more than that to her during her husband’s final hospitalization and death. But Clara lived another 40 years and although, as you note, she had stopped composing, she never stopped teaching and performing. In fact her influence on piano performance is still felt today. In her time she would have been seen as Friedrich Wiek’s daughter and Robert Schumann’s wife, but today we are ready to see her as much more than that, as she undoubtedly was.

Roseann: Actress Sarah Jeanette Taylor deserves much credit for sustaining a difficult one-woman performance for nearly 90 minutes. I don’t know whether it was her choice, or that of playwright-director Guzzy’s, but her occasional use of a German accent was distracting. Initially, it helped me to get a grasp of Friedrich Wieck; but when Taylor used it when reading her diary, or quoting Johannes Brahms, I became confused, especially when the accent seemed to suddenly disappear.

Gail: Taylor looks a great deal like Clara, and she ably plays a few pieces on the piano, but Guzzy’s script never even gives us a reason why Clara is here speaking to us. There is a lack of theatricality throughout.

Roseann: I may have learned some intriguing tidbits about Clara Schumann, but not for a moment did I feel I saw her.

Gail: I learned a great deal, but never felt I was in the theatre, which, of course, I wasn’t, but earlier Ventfort shows have had a more theatrical feel.

The positive aspect of Ventfort Hall is the beauty of the mansion and the authentic period feel it imparts. These shows undoubtedly bring many people through the doors who would otherwise be unaware of its existence. The drawback is that there is no climate control in the building – neither heat nor air conditioning – and the afternoon we attended the library was decidedly hot and stuffy.

If, like me, you know little about Clara Wiek Schumann, this piece will certainly inspire you to learn more about her and her music. A trip to Ventfort Hall is always a pleasure, and the show is scheduled at a variety of different times of day to make a 90 minute stop in Walker Street a pleasant addition to your day in Lenox.