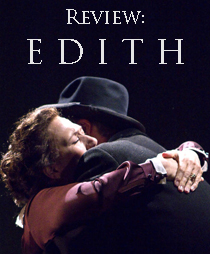 by Gail Burns and Larry Murray

Larry Murray: Finally, a totally satisfying play about marriage and politics. And it had no compromises. Edith is a new play by Kelly Masterson, and it gets a first class production under the steady hand of director Michael Sexton. Its cast of eight is uniformly wonderful, but it is Jayne Atkinson who rules the stage in the title role of Edith, the second wife of Woodrow Wilson.

Gail Burns: Avid Berkshire theatre-goers may remember this play from the Berkshire Playwright’s Lab reading last summer at the Mahaiwe which also featured Atkinson and Jack Gilpin who returns to play President Wilson.

Larry: Atkinson’s Edith was, as the few books about her life tell us, flamboyant, fashionable and confident of her political and management abilities. Yet she was an elegant and controlled “First Lady,” a title she abhorred, preferring to be called Mrs. Woodrow Wilson during the war years.

Gail: Thomas Woodrow Wilson (1856 – 1924) was our 28th President serving two terms in office from 1913 to 1921. His first wife, Ellen, died in 1914. Nine months later his personal physician Cary Grayson (played by Stephen Skybell) introduced him to the widow Edith Bolling Galt (1872-1961) and they were married later that year, a mere 16 months after his first wife passed away.

Needless to say, this didn’t sit too well with Wilson’s three 20-something daughters. The younger two were already married and raising small children, but Margaret (Samantha Soule), the eldest, who remained single and childless all her life, lived at the White House, and had acted a First Lady following her mother’s death, was especially distressed by the acquisition of an opiniated stepmother.

But Edith and Woodrow, or Tommy as she often calls him in this play, were a happy middle-aged love match. They shared a love of automobiles and golf, and she accompanied him to Paris after the end of World War I. She was also with him in September of 1919 when, on a whistle stop train tour across the country giving stump speeches on behalf of his dream of establishing a League of Nations, he suffered what may have been a small stroke. Back in Washingtn DC on October 2, 1919, Wilson had a major stroke that left him paralyzed on the left side. Edith, with the support of Grayson, kept the severity of the President’s condition from the public for the remainder of his presidency.

Masterson’s play begins the night of the stroke and ends six weeks later when the Senate defeats the motion to join the League of Nations. It also uses flashbacks to tell of Edith and Woodrow’s courtship and their happy times working and playing together. Along with Edith, Woodrow, Margaret, and Dr. Grayson, it gives us glimpses of several other historical figures: secret service agent Col. Edmund W. Starling (RJ Hatanaka); Joseph Tumulty (Peter Rini), Wilson’s secretary, the position we now call Chief of Staff; Vice President Thomas R. Marshall (Dan Butler); and Henry Cabot Lodge (Walter Hudson), who was what we would now call the Senate Majority Leader and the strongest opponent of Wilson’s policies.

Larry: Masterson brings this story to life brilliantly. it’s been a long time since I saw the stage used so cinematically. The scenes dissolved from one location to the next with a set changing choreography that never slowed the action on stage.

Gail: We both loved how Brett J. Banakis’ set took the play seamlessly through 54 scene changes. There was a diligent crew, costumed as White House domestic staff of the period, who moved the quite large rolling set pieces – mostly walls, doorways and windows – around the stage, often while the actors continued on to the next scene. Bedrooms, offices, autombile outings, the golf course, Paris, aboard the train – you always knew where you were , although I confess that a few of the flashback scenes had me confused as to when they were taking place. The climactic showdown between Wilson and Lodge in the Oval Office was very neatly staged.

Larry: Masterson has done many screenplays, but says he likes writing plays more since they allow him to indulge in language and nuance, while film writing is more technical and precise. You have often said that plays are as much about character as story. Would you agree that the two elements were perfectly balanced here?

Gail: Absolutely! I cared about the characters and was engrossed in the story. And you don’t need to be a history professor to enjoy this show. The few paragraphs I penned above give you enough background information, and Masterston makes it easy to follow the action while tossing in fun bits of trivia. There is a golfing scene because Wilson holds the record of all the presidents for the most rounds of golf played while in office. Another scene shows Edith and Woodrow on their way to the 1915 World Series because he was an avid baseball fan and the first President to throw out a first ball at a World Series game. In fact, a true expert on this era might enjoy the show less than the average ticket buyer because dramatic license has been taken, as it must, in the interest of telling a compact and compelling story.

Larry: Looking back, most agree that Edith was a shadow President. But what enabled her to be so effective was not covered by the play. She had already lost a husband and all that entails. She managed his business after his death. Earlier in her life, she cared for a disabled grandmother as a child, As we see in the play, Woodrow had the habit of sharing issues and decisions with her, even before they got married. So her being able to take over when he had a stroke was not a stretch for her.

Political opponents accused her of being power hungry and called her “The Iron Queen” and “The Presidentress” in the struggle with Lodge (Walter Hudson) over the League of Nations.

Gail: While Atkinson’s Edith is clearly the center of the play, I really enjoyed meeting the other historical figures in this story. Atkinson and Gilpin look remarkably like the first couple, but otherwise casting actors who look like their real-life counterparts wasn’t necessary since most people don’t have clear mental images of the leading players in Washington nearly a century ago. Hatanaka brings a sweet ingenuity to Starling, who went on to protect four more presidents in the White House. And Huson makes a fine villian. There does seem to be a decided Democratic bent to this play – Wilson was a Democrat and Lodge a Republican – which sat well with the Blue Staters in Stockbridge.

Butler deftly handles much of the comic relief, even though I found the gags about the Vice President as the invisble cypher to be rather predictable. Wilson genuinely disliked Marshall , especially his sense of humor, and Wilson’s efforts to marginalize him did much to weaken the office into the impotent figurehead position it is today.

I know you were confused by Grayson, Wilson’s physician, and Tumulty, his personal secretary. Sexton, Skybell, Rini, costume designer David Murin and wig designers Rob Greene and J. Jared Janas could have done more to make these two distinctive.

Larry: Yes, sitting in the back rows of the theatre, you need a few more clues when the actors appear dressed so similarly. This play brings to life a very important time in American history, when civil rights for African Americans and women were radical ideas.

[Both Woodrow and Edith were segregationist southerners. He refused to sign an anti-lynching bill into law among other regressive actions. But we might leave Wilson’s AA civil rights record out of this review since they were not covered by the play.]

It wasn’t Edith’s idea to take over as the President’s proxy. It was the medical experts. They insisted that in order for Wilson to recover he would have to be shielded from dealing with problems. The records show Edith actually suggested that her husband should resign, but the doctors thought it would be bad for the country, as well as for Wilson’s recovery, if he resigned. I loved how the actors drew us in over the conflicts between those closest to the President. His illness lingered for more than a year, and she spent it as his intermediary, deciding what he was told, summarizing documents for him, and conveying his decisions. Though she was attacked for her role (particularly by the White House staff and the Republican opposition), history credits her with doing a fine job of it.

Gail: Edith Wilson was a great lady who remained active in Washington until her death in 1961 – the last inauguration she attended was John F. Kennedy’s. But now I want a play about Margaret Woodrow Wilson, although sadly Soule, who is delightful here, would be far too pretty to play her in a true bio-play. She had her time as acting First Lady, made several recordings as a vocalist, and spent the last six years of her life in the ashram of Sri Aurobindo in Pondicherry, India. She collaborated with Joseph Campbell on the English translation of The Gospel of Sri Ramakrishna. What a great life! What a fascinating woman! While Woodrow Wilson is not known as one of our most dashing and charismatic presidents, he certainly surrounded himself with smart women, and that saved his life and his presidency.

Larry: It’s sounding like we are in agreement that this is one of the best plays of the year. Edith boasts a solid script with superb acting in a performance that carries you back a century in a stunning series of 54 fast moving, almost cinematic scenes. This is one history lesson audiences will long remember.