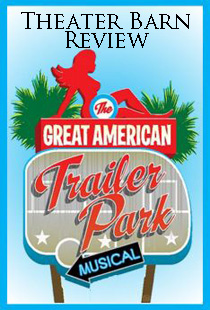 By Gail Burns and Roseann Cane

Gail Burns: If there’s a show with a title that makes you say “What the..??” – whether it’s a Broadway hit like “Urinetown” or “The Drowsy Chaperone,” or something you’ve never heard of before like “Zombie Prom” or “The Great American Trailer Park Musical” – and it’s being directed by Bert Bernardi at The Theater Barn, this is a show you want to see. You need to call the box office ASAP and say “I want to see THAT show.” Because it is bound to be great fun.

Roseann Cane: I’d forgotten how pleasant it can be just to have a night of silly fun at the theater. I really knew nothing about “The Great American Trailer Park Musical,” and, truth be told, I’d braced myself for an underwhelming evening. But when we entered The Theater Barn, and I drank in Abe Phelps’s nicely crafted set—the hindquarters of two trailers framing a trio of beach chairs and an assortment of de rigueur lawn accents, including a pink flamingo and a garden gnome—I felt a spark of hope.

Gail: The show is set in Armadillo Acres, a trailer park in Starke, Florida, a small town about midway between Gainesville and Jacksonville in the northern part of the state. No beach resorts here. And the electricity goes out with every storm. We’re talking Georgia’s Dukes of Hazzard much more than Florida’s Golden Girls.

The southern setting makes the “trailer park” issue slightly more palatable to a local audience, and Betsy Kelso’s book and David Nehls’s lyrics manage to deftly walk that razor’s edge between broad caricature and lovably flawed humanity. There are cliches and stereotypes of the kind of people who live in manufactured housing communities, and some of them apply some of the time. But the bottom line is that trailers/mobile homes are America’s affordable housing and the people who live in them are home owners and active citizens in the towns where they live, work, vote, and pay their taxes.

Roseann: Yes, I’d worried that we’d be subjected to wince-inducing mockery with a hefty dose of schadenfreude. But then, yeehaw! Kevin Francis Finn’s band brought on some foot-stompin’ music, and out came the Armadillo Acres Trailer Park’s garish Greek chorus, Betty (Jerielle Morwitz), Pickles (Victoria Broadhurst), and Lin (Caitlin Lester-Sams). (Lin, by the way, is short for Linoleum, ’cause she was born on the kitchen floor.) Decked out in perfectly tacky North Florida garb designed by Alyssa Couturier, the trio shook their crazy-bad wigs and their crazy-good bodies as they belted out some superfine country-style tunes.

Apparently Morwitz has a long history at The Theater Barn, but this was my first time seeing her, and I was wowed! She’s a pistol, one of those performers who really lights up a stage, and I think she was brilliantly cast.

Gail: This is the first time in many, many years that I haven’t covered the whole Theater Barn season and I have had the pleasure of seeing Morwitz in many different roles. She is one of my favorites. The Barn routinely utilizes the gifts of proven regulars with talented youngsters on the rise. If there is a complaint to be made about this cast it is that they are all too young. This is a show about mid-life angst and these kids aren’t there yet!

Roseann: I also found Lester-Sams, who is making her Theater Barn debut, dead-on terrific. And Broadhurst is daffy and adorable. I do wish she’d enunciate more clearly. She has a fabulous voice, but sometimes her words seemed garbled to me.

Gail: Nehls’s tunes are not memorable, but they are loads of fun while you’re hearing them, and his lyrics really are clever. Bernardi has assembled a terrific cast. The show is structured around the small tale of the precarious twenty-year marriage of Norbert (Shaun Rice) and Jeannie (Katie Clark). He is a toll booth worker and she is an agoraphobic, afraid to leave their trailer since the kidnapping of their infant son early in their marriage. When a stripper named Pippi (Mary Kate Morrissey), on the run from her abusive boyfriend Duke (Jordan Wolfe), moves in next door, she and Norbert start an affair.

What I liked about this central plot line was the humanity Bernardi and his actors, and Kelso and Nehls, gave this trio. They are funny, yes, but they are also three-dimensional and sympathetic. Norbert loves Jeannie but he needs a life outside Armadillo Acres. Jeannie loves Norbert and genuinely wants to overcome her phobia to join him at the Ice Capades for their anniversary. Pippi wants real love and stability in her life, and Norbert offers that.

Roseann: I found Rice an endearing lummox in the tradition of Jackie Gleason and Nathan Lane. And Wolfe is very, very funny.

Gail: I adored Rice’s Norbert, but I found Wolfe’s singing voice to be weak. It took me a couple of verses of of his introductory solo to realize that he was singing about road kill. If you can’t project well enough to be heard unamplified at the Theater Barn you need to go back for more voice lessons!

Roseann: Clark and Morrissey are loaded with talent and fun to watch. But I thought their costumes were not as successful as the rest, and unfortunately, this diminished their performances. Clark was made up to look normal bordering on mousy, with contemporary glasses and dark hair pinned back simply from her face. She sang regretfully of letting herself go, of her old “Suzanne Somers hair,” but I didn’t see the woman she described. And I wish her transformation toward the end of the show included some big hair and big makeup. She looked mildly tacky rather than over the top.

Roseann: I disagree. Although Pippi’s skirts and shorts were appropriately cut up to there, the comparatively subdued colors, her jackets and accessories, and her long, soft, pretty hair almost gave the impression of refinement. I think she should have been really tarted-up, much more so than all the other ladies.

But in the grand scheme of things, those are minor complaints. Bernardi has directed this fine ensemble with a skilled and knowing hand, and I’m very happy I had an evening full of laughs.

Gail: The night we were there the laughs started within minutes of the curtain going up and never stopped. Much as I love the language of Shakespeare and Oscar Wilde, the depth of feeling in King Lear, or learning more about fascinating folks like Dorothy Thompson and Edith Wilson, I feel no shame in stating that I love to laugh. Wild, silly fun like this is just as difficult to produce as any of the pieces I’ve mentioned that are considered of higher artistic value by some.

In fact this is a big show for the tiny Theater Barn to tackle. Tons of costumes and wigs, a big set, a band, these things don’t come cheap. They pulled out all the stops and it shows. This is just a delightful musical comedy.