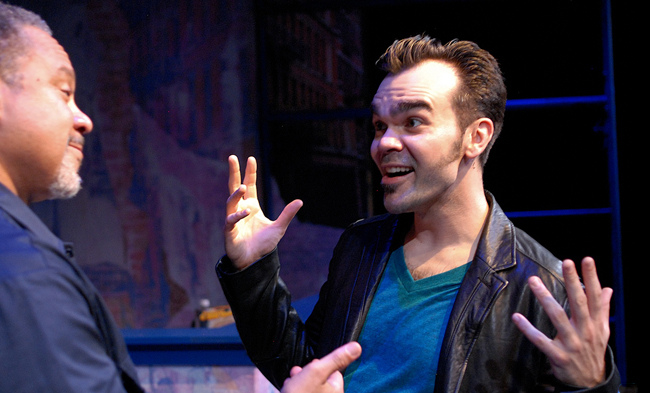 Review: Arms on Fire at the Chester Theatre Company
by Gail M. Burns

There is nothing more terrifying for an artist than trying to follow up on a mega-success. Composer Duncan Sheik and poet/lyricist Steven Sater hit the theatrical stratosphere with their musical adaptation of Spring Awakening in 2006, winning Tonys, Grammys, and Drama Desk awards. While neither are one hit wonders – they have had other major and minor successes alone and in collaboration – there has been an extraordinary amount of hype and hope attached to the world premiere of Arms on Fire. This could be their Next Big Thing! If Sheik and Sater were hoping to sneak it in under the radar by premiering it at the tiny, off the beaten track Chester Theatre Company, neither the Company nor the national media had any intention of letting them do so.

Arms on Fire is not a musical but a “play with music.” A four piece band, barely visible on stage behind a scrim, play nine musical numbers and some incidental music while James Barry and Guiesseppe Jones perform a series of scenes about two men – Smith (Barry) a washed-up, never-has-been singer and heroin addict, and Ulysses (Jones) a formerly successful Honduran disc jockey who has immigrated to New York City and now works in a nut packaging plant. All the action takes place in the present in Ulysses’ tiny studio apartment in Hell’s Kitchen, where Smith shows up one night having been lured in by the voice of a female singer on an LP that Ulysses is playing.

The audience sees and hears this woman, Josephina (Natalie Mendoza), although in the world of the play she is dead. For most of the show she too is behind the scrim with the band, hazily visible when properly lit. When she does appear on the stage with the men they do not see her. She has no dialogue, she only sings, while the men do all the talking. Barry does get to sing one song, a beautiful one called “A Boat on the Sea” – which was the first song Sheik and Sater ever collaborated on and the only one in this score not previously recorded – and he gets to do so on stage, fully lit.

What we have here are two rather interesting characters played by two fine actors, some pleasant music well performed, and a handsome though problematic set by Travis A. George. But this is not a play. Because Ulysses rarely speaks, we don’t get enough information about him, except in relation to Josephina. She we only see in his memory’s eye. Smith talks incessantly, but it is hard to tell how much of what he divulges is true. Sater has created a fascinating and highly poetic mode of speech for Smith, although the fastidious should be warned that it is laden with F-bombs. So we never get enough information to really connect and care about these characters.

For instance, why Ulysses, a native Honduran, spoke unaccented English. Mendoza sings with a heavy accent, but Jones doesn’t use one at all except when pronouncing Hispanic names. Had he been a DJ on an English-speaking radio station who has had his accent trained out of him? If so, tell us. That would be an interesting part of Ulysses’ story. Without a plausible explanation it just appeared to be lazy acting or casting or both.

Mendoza is a strong singer, but the music, most of which was originally written for and recorded on their 2001 Phantom Moon album, suffers from a deadly sameness, which is exacerbated by the new Latin-influenced orchestration created for this show. Also, it is so darned hard to see Mendoza behind that scrim that the words are hard to make out – its is always hard to understand someone, speaking or singing, if you cannot clearly see their face – so its impossible to tell whether or not the songs have any connection to the characters or dialogue, although one assumes they must.

George’s set is cantilevered stage left, which means that the audience seated far house left has an obstructed view and literally can only see a corner of the scrim. With only three characters on the stage, Director Byam Stevens should have made sure they were all visible to all of the audience all of the time. Since the floor seating at Chester is moveable, shifting the audience to the right might eliminate the need to remove the seats with an obstructed view. (Due to a unique situation with my own seating I sat house left for the first act and house right for the second and it was like seeing a whole different play.) Everyone who buys a ticket should see the same show, and see all of it.

Otherwise this production lives up to Chester’s high production standards, but it may not be to the taste of their core audience, who enjoy the new and experimental, but expect some semblance of plot into the bargain.

Arms on Fire – the title comes from a tale Smith tells of a friend who literally lights his arms on fire after being instructed to do so by a Buddhist priest in order to attain Enlightenment – has apparently been a “passion project” of Sheik and Sater’s for years, and they now have the financial freedom and artistic clout to experiment with it. There are flashes of brilliance here, but in its current state it is not even close to being their Next Big Thing.

The Chester Theatre Company is located where the Berkshires and the Pioneer Valley meet at 15 Middlefield Road in Chester, MA 01011. Box Office: (413) 354-7771. chestertheatre.org