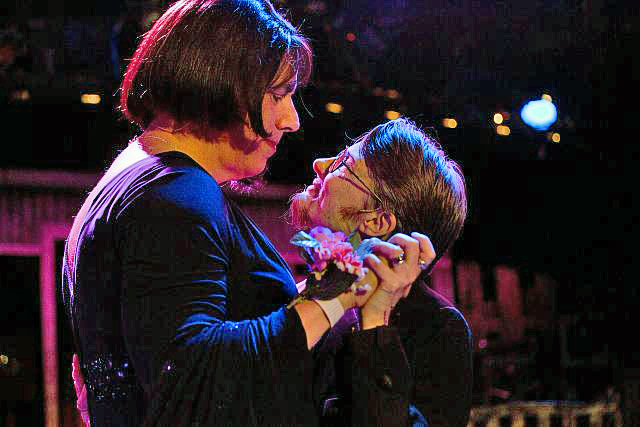 Gail M. Burns: Most people think that the musical Oklahoma! was so innovative that it changed the course of musical theatre, and I think Southern Comfort may end up doing the same. What do you think, Larry?

Larry Murray: This intimate production for Bill Finn’s Musical Theatre Lab certainly explores new ground not only for musicals, but for theatre in general. The story of Lola and Robert, a transgender couple, is Shakespearean in its scope, sweeping in its complexity and has an unusual hybrid score that is part musical theatre, but because of its instrumentation, more bluegrass and country than Broadway. The story was incredibly unusual, and down-to-earth in a human, people next-door way, though few of us can claim such interesting neighbors. There are basically three couples, though their identities and relationships are far from standard. You are good at following the family trees in Shakespeare, can you run down who is who, who was who and who will be who?

Gail: Well with the exception of Lola (Jeff McCarthy), all the characters have transitioned and are living as the gender with which they identify. Robert (Annette O’Toole), Sam (Todd Cerveris), and Jackson (Jeffrey Kuhn) are men and Carly (Natalie Joy Johson) and Melanie (Robin Skye) are women, although only Melanie is using the gender assigned her at birth (this is called cisgender). Once a trans person announces their gender then they expect to be referred to and treated as such, even if they never make any further cosmetic change to their appearance. But in this case all the trans folks appear to be the gender they claim to be. Except for O’Toole and McCarthy, these are cisgender actors playing their own gender, in other words biological men are playing Sam and Jackson and biological women are playing Melanie and Carly.

Melanie, a cisgender woman, and Sam, a trans man, are a couple and remain so throughout the show. Robert, a trans man starts dating Lola, a trans woman at the very beginning of her transition, at the start of the show and they remain together. Jackson, a trans man, hooks up with Carly, a trans woman, then breaks up with her, then…well, you know young people.

In this play all of the characters identify as either male or female, but there are trans people who identify as both, or neither.

A trans friend of mine often posts on his Facebook wall: “Some men have uterueses. Get over it!” And I think that is the most confusing thing about trans life for cisgender people like you and me to grasp. We equate gender with physiology – everyone with a penis is male, everyone with a vagina is female – trans people do not. They have a much, much broader definition of gender. It has nothing to do with biological “equipment” and it has no connection to sexual preference. All three couples appear heterosexual, but Melanie and Sam both have female genitalia. Yet they don’t identify as lesbians but as a man and a woman

The most important thing to remember is that these are PEOPLE whose wants and needs are universal – to love and be loved, to earn an honest living wage, and to be treated with respect and dignity. There is nothing complicated about that.

Larry: I was amazed at the transformation that Annette O’Toole as Robert and Jeff McCarthy as Lola were able to achieve, especially having watched O’Toole for years as Mrs. Kent on Smallville and McCarthy in a variety of romantic and dramatic roles at Barrington Stage. Together they reminded me of the Mutt and Jeff of a high school yearbook.

Gail: Again we fall back on rigid societal norms. Who says the man has to be taller than the woman? Who says height or weight or gender have anything to do with love?

Yes, O’Toole is absolutely amazing in the completeness of her transformation, but McCarthy has to play a person on the verge, teetering between gender identities and comfortable with neither. Both give touching and accessible performances.

Larry: While the book by Dan Collins never tried to be Shakespearean, it did bring his style of storytellling to mind with the role reversals, rapid changes of location, and the rapid series of telling scenes that flesh out the life of one King or another. When we meet the parents of Robert they still call him Barbara and we see their lack of acceptance and understanding as he tries to tell them he has ovarian cancer.

Gail: I love your Shakespearean analogy. Twelfth Night and As You Like It are the most obvious correlaries, but women also cross dress in Cymbeline, The Two Gentlemen of Verona, and The Merchant of Venice, while men cross dress in The Merry Wives of Windsor and The Taming of the Shrew. There is a world of difference between cross dressing or being a transvestite, and being transgender, but in all the cases where women dress as men it is a transformative experience for all the characters in the play.

The message is that challenging gender norms is a powerful thing for women. The cross dressing men in Shakespeare are used more as comic relief, but the reality of men choosing to dress or live as women is equally unsettling to society. We perceive masculinity as strength and feminity as weakness, therefore transitioning from female to male is seen as an upgrade, while the reverse is a form of degradation. Without the issue of transitioning, this imbalance has been widely discussed in recent debates about rape culture.

All of the characters in Southern Comfort have suffered splits from their biological families, who don’t or won’t understand their lives. Making a gender transition is not a choice, anymore than race or sexual preference is, it is a need to become who you authentically are, and in this society it is an INCREDIBLY brave and difficult process. Lola is the example of how confusing the early stages of the process can be. Robert and his “Chosen Family” come together because we all need the comfortable love a family provides, and this group can understand and support each other in a way others can’t.

Larry: The St. Germain stage spilled over its normal space and the audience enters through the front yard with its mailbox, decorations and through the arbor gate to get to their seats. Later arriving actors use it to come and go. The band is in front of – and behind – a screened in shed of Robert Eades home. The musicians – Lizzie Hagstedt, bass; Elizabeth Ward Land, percussion; David Lutken, guitar, banjo, mandolin, dobro, and harmonica; and Joel Waggoner, fiddle – are also part of the cast, playing doctors and parents as needed to keep the complicated narrative flowing, and singing up a storm.

Gail: I loved how the James J. Fenton’s set wrapped around and welcomed the audience into Robert’s world. It was fun to look at all the tchotchkes in the entry way. You felt embraced by this world, which was very important when introducing the audience to a world they might have never even realized existed, let alone considered visiting. There is never talk of prejudice within the transgender community, although I am certain that it exists. This is a play about similarities and acceptance, not difficulties and barriers. A “fourth wall” would have been a barrier.

Larry: Where Southern Comfort stretched the boundaries between all the musicals that came before it and itself is the facile interplay of text and music. There are extensive sections of what might – in the operatic world – be considered recitative, sung text set to music, only the tempo and delivery had a syncopated, ad libbed quality that kept it surprisingly natural. Yet it felt different, and that made it feel custom designed for this particular story.

Gail: This was my analogy to Oklahoma! I really think this is a show which, if it does not itself have a significant impact on American musical theatre, certainly heralds one, and not because the characters are transgender but because of the innovations you have delineated above. That also means it runs the risk of looking as naïve as Oklahoma! does many decades hence, but isn’t that the whole point of being a catlyst for change? You aim to become the norm.

Larry: I particularly loved the song “Two Hundred Miles” in which the journey for medical help went on almost forever as this unlikely couple was denied help because they were not conventional people. If I remember correctly, the banjo picking was even – briefly – matched by some fiddle pickin’ rather than bowing. That gives a musical cue similar to a clock ticking to symbolize the passage of time which was critical for Robert’s health.

Gail: That was the song that reduced me to tears, although there are many other sentimental moments in the show. Most Americans don’t realize that it is absolutely legal for a doctor or hospital to refuse to treat you if they don’t approve of your body. It happens to transgenger people and fat people every day, and it is disgraceful.

Larry: As wonderful as this production is in almost every aspect I still wish they could find a better way to describe it than as a “World Premiere” since it sets up such unreachable expectations. Ratchet down the hyperbole to “First Fully Staged Production” and we reviewers wouldn’t feel we had to rate it as a final version, but rather a work that has come a long way, and still may have further to travel on the journey to perfection.

Gail: However it is billed, this is not the first time out of the gate for this show, merely the first time the press has had a crack at it. Southern Comfort began its life as an award winning 2001 documentary film of the same name by Kate Davis. David Dusold and Thomas Caruso conceived the idea of bringing it to the stage as a musical, and began collaborating with composer Julianne Wick Davis and librettist Dan Collins. There have already been public staged readings, a workshop production in New York City at CAP21 in 2011, also directed by Caruso and featuring many of the same performers, and at the National Allaince for Musical Theatre’s 24th Festival of New Musicals in 2012.

I agree with you that there are things that could be tinkered with and, hopefully, improved in the show as it is now, but again I look at Oklahoma! Its flaws are SO apparent to us today, and yet it was a genre changing mega-hit. The Threepenny Opera is another prime example – an astonishing and astonishingly imperfect work of art. Same with many, many shows that are considered iconic. A bomb doesn’t have to explode perfectly to make an impact.

Larry: Finally, while many of those in the audience opening night were clearly open to the idea of meeting and learning about the lives of transgendered people, there were a few who seemed mystified about the subject, as if it was the first time they actually thought about the topic, and being at a live performance weren’t able to change the subject or shove it under the rug as they might normally do. At the end of the first half they were a bit grumbly, but by the end of the show almost all found that it connected, a musical about people very much like ourselves, dealing the best way they knew how with a totally different set of problems than our own.

Gail: This is a love story about three couples who, like all of us, face challenges some of which make them and some of which break them. Its the characters and the music that are innovative here, not the plot. People are people. Period.