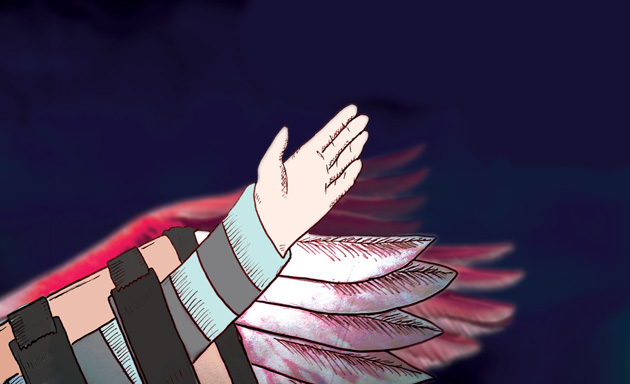 For the Fringe, Painting His Wings borders on the traditional. It is very clearly a play with a script that tells a linear story. The four actors play the same characters throughout, and, although its billed as a “Partial Puppet Play” the puppets consist of six finger puppets and two pair of wings. I mention this because I know puppetry is a turn-off for some who do not consider it true “theatre.”

Why isn’t Abellona Whalen (Katie Lawson) talking? She talks to the audience, and to her older brother Christopher (Nathaniel Moore), but not to her parents Willa (Alison Scaramella) and Paul (Antonio David Lyons) until the very end, when the source of the family’s sorrow and the structure of the play is revealed.

Abellona’s age is never specified, but she can read and she goes to school and yet still believes in what child psychologists call “magical thinking,” so she is somewhere between seven and ten. Christopher is probably in the fragile years of early adolescence, between 11-14. Both are creative children – the product of a loving marriage and a happy home. Christopher is fascinated by flight. He makes and paints little airplanes, which he adds one by one to a mobile that hangs over his bed. He is also painting a pair of cardboard wings to blend in to the night sky. Abellona, who lugs around a copy of H. A. Rey’s The Stars, is enamored of the night sky and is teaching herself to identify individual stars and the constellations. He lets her help paint stars on to his wings, and she insists that her favorite star, Antarus, be represented.

We don’t see their parents face any larger issues than lost door keys and broken grocery bags, but something has happened. Willa takes to disguising herself and pouring out her troubles to similarly disguised folks in Internet chat rooms in the middle of the night, when she believes Paul is soundly sleeping.

Abellona wears three hand-crafted finger puppets on each hand, and with them she orchestrates her world. She wears a little backpack in which she keeps her wishes safe, and a sock monkey hat on her head. Costume designer Jenny Kessler has clothed Abellona in the mix of vivid colors and patterns favored by creative young girls old enough to dress themselves. Children’s clothing assumes the necessity of a freedom movement not permitted to adults, and Lawson moves as freely and easily as a child in her pink dress, yellow tights, and striped socks.

Over the course of the ninety minute play, we see how each of the characters is coping with their situation, and we watch them ultimately succeed in finding peace and forgiveness. Playwright Sinead Daly, a young playwright who once participated in The Fringe’s Early Stages writing program, has crafted a touching and very theatrical work, which Heather Lanza has neatly staged on a minimal but evocative set. With a few pieces of furniture and Megan Lang’s sharply focused lights the family’s yard, front door, dining room, and Christopher’s bedroom occupy specific areas of the black box that is the Liebowitz Studio Theater at Simon’s Rock, with plenty of playing space left over for Abellona’s flights of fantasy.

The performances are very low-key, genuine, and unforced, giving the effect that you are eavesdropping on the goings-on in an average family home. Lawson gives a delight portrait of young Abellona without devolving into cutesiness. Moore likewise puts on Christopher’s uncomfortable adolescent skin without over playing. Scaramella and Lyons make you wish they were your parents. Their scene together late in the play is touching and honest without ever being maudlin.

Painting His Wings tackles an enormous and uncomfortable topic with wisdom and humanity. It may not have all the special effects that we have come to associate with “cutting edge” theatre, but it has everything a great play needs – characters we care about, a story worth telling, and a secret to ponder.