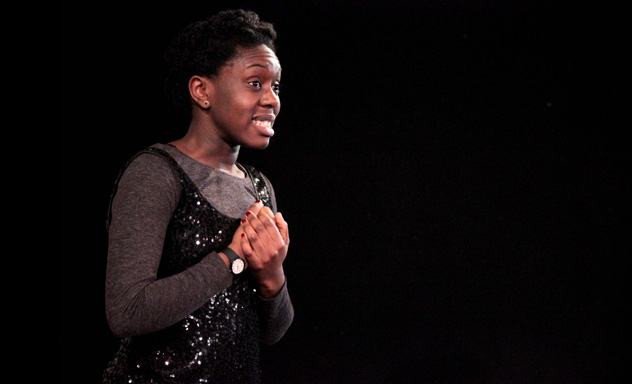 Obehi Janice is a 25 year old graduate of Georgetown University who is just beginning her career as a solo performer. FUFU & OREOS [link] focuses on her search to balance her Nigerian heritage – her parents were born there – and her American identity – she was born and raised here. Of course, that struggle includes being an African-American, a black American, an American Nigerian. Its conplicated, and, as a young woman, she is just starting on her journey of discovery.

The title says it all. Fufu is a staple dish of the Nigerian diet, with a base of mashed yams, but with spices that cannot be bought or replicated in the USA. And Oreos are those yummy, oh-so-not-good-for-you sandwich cookies that are black on the outside and white on the inside. The word Oreo has long been used to refer to black Americans who embrace white culture more than black culture. Is Obehi Fufu, or Oreos, or both, or neither? And does it matter?

FUFU & OREOS is autobiographical and universal. It is not structured linearly and Obehi sometimes allows herself to teeter on the scary precepice of (appearing) not to know what she’s going to do or say next. Using the word “improvised” in the press for the show encourages the audience to teeter with her, but the quick sound and video cues betray the carefully scripted and rehearsed nature of the performance.

At times during the FUFU & OREOS I was concerned that there wasn’t a center, a core message, but at the end I was happy with what I had seen. This is not a perfect piece, it still needs work, but Obehi is a talented and engaging performer, and I will be very interested to see where her talent takes her. She is certainly on the right path.

Supplement to the Review

Q&A with Obehi Janice, creater and performer of FUFU & OREOS
By Vernisa Allen

Obehi Janice, a Nigerian/American performer, is making her Berkshire Fringe debut. She graduated from Georgetown University and has trained with Sojourn Theatre and Shakespeare & Company. A lover of the stage and solo performances, she has had various roles with Company One, Zeitgeist Stage Company, Underground Railway Theater, Actors’ Shakespeare Project, and Whistler in the Dark, just to name a few. Obehi will be performing her solo piece FUFU & OREOS, a show about finding oneself through the voice and stories.

What inspired you to create your show?
I have done many solo pieces. I performed my first one during my junior year of college at Georgetown University. It was only a half hour.  I always wanted to perform, but I quickly learned that there weren’t too many black actress roles in the theatre. So I began creating my own roles! My senior year I struggled with depression. It was a very quiet period of my life, and I generally kept to myself. I started writing speeches not about depression, but about being Nigerian, Black, and African American. This is where some of the inspiration for my show “FUFU & OREOS” came into play. While in this stage of my life I began to wonder if I was “Black” enough, or “Nigerian” enough. I thought I could use this piece and my voice to search for myself.

How did you create the show and what was the process like?
I asked myself the question what is the worst play I could write? Then I realized talking about myself would be the worst thing that I could do! I wanted to challenge myself. I began crafting this story about myself, and about some of my struggles. The title comes from two dishes that represent parts of myself. Fufu is a well- known Nigerian dish, and in the title it represents my Nigerian culture. Oreos, of course are white on the inside and black on the outside, and can be used as a label for Black people who are too “White.”

Who were the key collaborators?  Who would you not have been able to do your show without?
This show has been mostly a solo operation, but there are some people who have helped out with producing this show. I have a sound designer, who’s based in California. It has been nice to work with her, and to show her a little bit of my Nigerian culture. There have also been a few filmmakers who collaborate with me and help produce mini-sketches of the show to put online. I’m hoping to expand my collaboration with other people in this process. I would like the show to be even more of an interactive memoir with conceptual photos, audio, and video that is available online.

Where did you study or train?
I graduated in 2009 with an undergraduate degree in culture and politics from Georgetown University. I’ve trained in devising civic theatre with Sojourn Theater. I’ve studied classical acting at Shakespeare and Company. I’ve performed for Company One, New Exhibition Room, Actors’ Shakespeare Project, Underground Railway Theater, Huntington Theater Company, and Zeitgeist Stage.

If you were a nut, what kind of nut would you be, and why?
I would be the kola nut from Nigeria because it’s very hard to crack. I also like almonds, but they’re kind of boring!