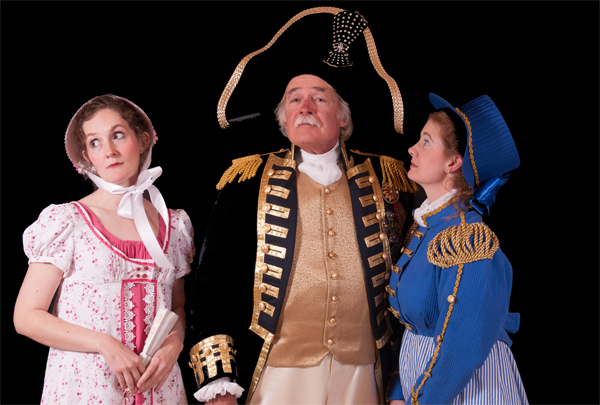 Libby Maxey as Josephine and Steven Willliams as Ralph Rickstraw.

Delightful H.M.S. Pinafore docks at Academy of Music in Northampton
Review and Discussion by Gail M. Burns and Larry Murray

Larry Murray: This is one of my favorite G&S shows, how about you…

Gail M. Burns: One of them, yes. I have a special fondness for H.M.S. Pinafore because it was the first G&S operetta that I directed, but looking at it with an impartial eye it is just Baby Gilbert & Sullivan. Although it was their fourth collaboration, it was their first mega-hit and in it you see the soldification of the components that they would later hone to perfection in their mature classics – The Pirates of Penzance, Iolanthe, and The Mikado.

Larry: What could be more British than the nautical themes of Pinafore and Penzance, so I am always willing to sail the ocean blue with W.S. Gilbert and Arthur Sullivan’s first big hit. It’s a big production and there’s room for everyone at the grand Academy of Music in Northampton. The stage is larger than the school halls they have used in the past, and it has the ability to drop set pieces in from the flies, and fit 50 people on stage at the same time if needed.

Gail: I love to see how many people are involved in VLO productions year after year – as you said, about 50 on stage, 25 in the orchestra, and countless others behind the scenes. And I love to see Gilbert & Sullivan performed in houses like the 1891 Northampton Academy of Music (Gilbert & Sullivan’s final collaboration opened in 1896) which has probably seen the H.M.S. Pinafore dock in her port a few dozen times over the years.

All that being said, director Graham Christian has made this a MUCH bigger production than it needs to be. Pinafore is a one set show, but Christian has taken the action ashore and added two unecessary ballroom scenes. I remarked on our way to the show that I hoped this wouldn’t be one of those stuffy preserved-in-mothballs productions, but in hindsight I wish that Christian had reined in his inventiveness considerably.

Larry: You’re right, there were excesses in the set design, but I think part of the problem is the thrill of being in a properly equipped facility and having the ability to fly set pieces and scrims which ended up being overused. The lighting was simple, and certainly everyone could be easily seen. During the pre-performance announcements they noted that some future fundraising would make it possible to buy additional theatre lighting instruments which would lend a great deal of sophistication to the production, and spotlights are needed for the soloists as well.

Gail: This was our first visit to the Northampton Academy of Music together, and I was surprised to see how shabby it was in comparison with our two beautifully restored “urban” theatres in Berkshire County – The Colonial in Pittsfield and The Mahaiwe in Great Barrington. But I am delighted to see that NoHo is getting with the program and working towards restoring the Academy to its original glory while up-grading its amenities to serve 21st century artists and audiences.

Larry: I was shocked that the only snack offerings were sugary candy and popcorn like you find in chain movie operations. Did some city hack decide that? Fresh fruit home baked cookie would have been far preferable for me. And darned if I could find a water fountain anywhere. The crude bubbler in the men’s room looked like it hadn’t functioned in years.It’s like they are still in the 1960’s.

On the other hand I am always impressed at how well the sparsely settled Western part of Massachusetts – and the Pioneer Valley in particular – is able to come up with all the singers and musicians to mount big productions like Pinafore. Being a community project, the voices ranged from excellent to adequate, and the acting skills that went along with each character varied quite a bit. But everyone remembered their lines, and the chorus sounded increasingly confident as the performance went on.

Gail: This is community theatre, and I think the reason that Gilbert & Sullivan’s works have outlasted their contemporaries is because they are so community friendly. Everyone who can carry a tune can get in the act, and it is always joyous. You know, I can’t say enough good things about many of the performers. To start with, a very strong and stalwart Matthew Roehrig as Sir Joseph Porter, K.C.B.

Larry: To me, the most important role in the show with his patter song.

Gail: Yes but also outstanding are Heather Williams as Cousin Hebe, Michael Budnick as Dick Deadeye, and Philip Hart Helzer as a delightfully foppish Captain Corcoran. Could I have wished for equally strong singers in some of the other roles? Yes. But everyone did their best and the fun they were having flowed easily across the footlights.

Larry: I am thrilled when there is a live orchestra in the pit, and the 25 musicians acquitted themselves well, hitting all the right notes, especially the brass section which has some pretty challenging sections to play. Even more importantly Music Director and Conductor Aldo Fabrizi knew when to let his players go full tilt in the fortissimo passages, and to tamp down their enthusiasm for the tender and romantic passages that are so essential to this operetta, especially Kathy Blaisdell as Mrs. Cripps – better known as as “Little Buttercup”.

Gail: I really enjoy sitting so close to the orchestra and watching Fabrizi and his team do their thing. I was particularly close to percussionist Mark Richardson, and delighted in watching him manipulate the triangle using the big bass drum baton to mute it between strikes in the Bell Trio “Never Mind the Why and Wherefore” which is one of my very favorite songs in the show.

I think that Ralph Rackstraw (Steven Williams) and Josephine (Libby Maxey) carry the brunt of the romance in Pinafore, although her father, Captain Corcoran (Phil Helzer), and Little Buttercup do get their share of lusty middle-aged flirtation. The star-crossed love of the younger couple not only drives the plot, but allows Gilbert to poke endless holes in the encrusted and cumbersome British class system that keeps them apart. Josephine’s Act II solo “The Hours Creep on Apace” very clearly shows the choice she’s making between comfort and poverty in marrying Ralph.

Larry: Stage Director Graham Christian made much of the fact that this Pinafore would have dancing, but hard as the company tried, he was not terribly successful as a choreographer. Dancing seemed to be a foreign experience to most of the cast, with the exception of the Midshipmite Tommy Tucker, who has no lines to say but expresses himself through pantomime and dance. Played by a wonderful young Emmet Chilton-Sugarman, the lad has a great future ahead. Let’s hope he has an interest in developing his acting and singing chops so he can be a future triple threat performer.

Gail: Having a youngster play the Midshipmite is a long-standing tradition in productions of Pinafore, and I understand that Chilton-Sugarman has been (im)patiently waiting since he was a toddler for the opportunity to perform this role. Again, community theatre at its best!

Larry: Then there are the costumes and the story behind them…

Gail: As Director, Christian moved the time of the action to 1805, right after Nelson’s victory at Trafalgar, which allowed costume designers Elaine Walker and Laura Green license to create splendid Regency Era costumes (the hats for the Captain and Sir Joseph were to die for!), and required only two tiny tweeks to the libretto. But his interpolation of the two Regency Ball scenes was disastrous. They were overly long, awkwardly staged, and stopped the show dead in its tracks both times.

Larry: The continued popularity of Gilbert and Sullivan bodes well for the future of Valley Light Opera, and its new partnership with Northampton’s premiere performing arts venue. Among the plans are to redo the seating, and though I did not get a chance to try the sample in the lobby – the kids were monopolizing it – it appears to be somewhat larger than what is currently offered which is good but unfortunately it also looked as low to the floor as the present seats. They really need to increase the height a good six inches so people don’t find themselves resting their chins on their knees. There also needs to be some room to let other audience members to pass those already seated to get to their seats. I saw a number of rows empty out to make way for a latecomer to access to their middle seat. The Academy of Music was designed for the smaller people from the turn of the last century and Americans are far taller and wider these days.

Another thing the Northampton city planners need to do is address the impossible parking situation, especially for handicapped and elderly.

Gail: Parking in Northampton is a nightmare. You and I added an extra hour to our trip just to secure nearby parking. We got lucky, and, once safely parked, I found the house comfortable and accommodating to me with my rollator walker, which I was using as a seat more than a walking aid. For me to get in and out of seats as low as that would have been painful and humiliating. The seats in the Colonial and Mahaiwe are some of my favorites in terms of height and I hope those in charge of redesigning the Academy take a look at how those seats are “perched” and follow suit.

But ergomonics aside, we gladly drove 75-80 minutes over from northern Berkshire County to downtown Northampton because we LOVE Gilbert & Sullivan, and the VLO’s annual presentation is often our ONLY chance to see any. I am grateful to this company for their dedication to G&S and their inclusive policy that allows everyone to discover and connect with these delightful works of musical theatre.