“Urinetown” at Cohoes makes a splash 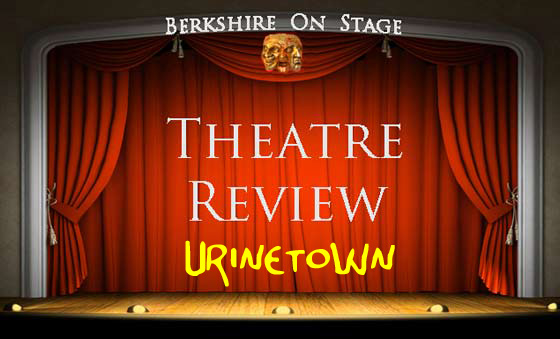 “Urinetown” at Cohoes makes a splash

What can you do with a show they titled “Urinetown”?
Theatre Review by Gail M. Burns

It’s hard to believe this little musical Urinetown, which struggled to existence at the New York International Fringe Festival in 2001, is now a respectable modern classic with Tony Awards and more than a decade in the regional/community theatre canon. But title alone guarantees that it will always retain its edge, and the subject matter has only become more timely and eerily prescient over the years.

When I first saw this show in 2006 at the Theater Barn I felt it was a metaphor for the unsustainability of our dependence on fossil fuels. Now, I see it for what it clearly was all along, a searing commentary on humankind’s willful exploitation of our natural resources to the point of tipping the balance of the global ecosystem.

Yes, its all about water, folks, a commodity literally vital to our continued survival.

Sounds like a toe-tapping show, doesn’t it? Well surprisingly, it is. Mark Hollman created a score that is both heartily original while paying homage and poking gentle fun at the whole of musical theatre – starting with the collaborations of Bertolt Brecht and Kurt Weill. In fact Urinetown is often billed as a “neo-Brecthian absurdist melodrama.” Sadly, director Jim Charles obviously didn’t get the memo, because it is the Brechtian absurdist melodrama that is missing from this production at the Cohoes Music Hall. Charles has assembled a very talented cast, many of whom clearly understand this show better than he does and do their utmost to convey its dark humor to the audience.

We are in Allegory Land here. All the characters are caricatures, broadly drawn versions of common theatrical stereotypes. The show begins with our genial narrator, Police Officer Lockstock (Evan Teich) and his sidekick Little Sally (Taylor Lane Ross), a delightful urchin, giving us the back story about the drought. Then we see the situation at Public Amenity #9 which is run by Penelope Pennywise (Kayley Alissa Hinen), assisted by the young and handsome Bobby Strong (Jon McHatton). The people, and they are a pretty disgusting looking bunch since there isn’t enough water to bathe properly, are barely able to pay the toilet fees and now the controlling monopoly, Urine Good Company, is going to the legislature to raise the fees. When Bobby’s elderly father (Marc Christopher, who also plays Hot Blades Harry in ActII) can’t come up with the money to use the public amenity, he relieves himself elsewhere, which is a crime punishable by being sent to Urinetown, a terrible place from whence no one has ever returned.

Seeing his father carted off moves Bobby to action, and he organizes a rebellion against the pay-to-pee policy and the fee hikes. At the same time he meets and falls in love with Hope Cladwell (Elizabeth Doyle), daughter of Caldwell B. Cladwell (Shawn Morgan), the owner of Urine Good Company, not knowing her true identity. When he does learn who she is, during a confrontation between the government and company officials and the rebels, he takes her hostage. During an attempt to negotiate a truce Bobby is himself sent to Urinetown, and Hope’s eyes are opened to her father’s maltreatment of the people and she takes Bobby’s place as the leader of the rebellion.

I will not reveal the ending, but remember to heed Officer Lockstock’s warning to Little Sally – this is NOT a happy musical!

In his program bio McHatton describes Bobby Strong as a dream role, and it is one to which he is eminently suited physically and vocally. He gives 110% and really nails the vocals on his big ballads “Look at the Sky” and “Run, Freedom, Run.” He is well matched with Doyle’s wide-eyed Hope, who is also a fine singer.

Hinen is a knock-out as Pennywise. I have seen other fine performers in the this role, but she took this woman and made her a force to be reckoned with vocally and physically. And Ross impressed as Little Sally, completing the trifecta of excellent performers I have seen play this urchin. Both women had a good understanding of what librettist/lyrcist Greg Kotis and Hollman had in mind when he wrote these parts. Teich didn’t quite have a full grip on Officer Lockstock – his side-kick is named Officer Barrel (Alex Jones), of course – which weakened the impact of many of Ross’s lines since the two characters serve as the narrating team. And when the narration is shaky so is the audience’s understanding of both plot and style.

Marc Christopher caught my eye in the several minor roles he assayed, notably Joseph Strong and Hot Blades Harry. A big fellow with a big voice he is light on his feet and defined distinct characterizations for each role so that there was no confusion as to his identity.

Morgan has none of the unctuous smarminess required of Cladwell, rendering him a villian without teeth. It is very important to the impact of the finale that the audience thoroughly hate Cladwell, and Morgan is rather clean-cut and All-American in his portrayal, although vocally strong. Charles has done him no favors by failing to provide even one set of bunny ears for his big number in Act I.

But then I have been spoiled – the first two productions of Urinetown I saw had one thing in common – Sky Vogel – first as Cladwell at the Theater Barn, and then as the director of the 2012 production at the Ghent Playhouse. Vogel is a local talent who has appeared on the Cohoes stage several times in the past and I wonder why C-R productions didn’t find a way to tap in to his expertise with this show.

Urintown is a show for a small ensemble cast, all of whom have to be equally strong, and, despite all the strength of some of the leading players, there were some very weak links here who showed up in stark contrast. And while this isn’t a big dance show like Cabaret or On the Town, some of my strongest memories of earlier productions have been the dance numbers. Here the choreography is lackluster, which is highly unusual for Cohoes which has earned its rep over the years with some of the best dancing in the region.

Ultimately, I was satisfied by the talent and energy of McHatton, Doyle, Ross, Hinen, and Christopher, along with a strong effort by Teich, and the strong storyline and musical score. A small but hardy pit band under the direction of Shoshana Seid-Green provided excellent musical accompaniment, and this production, like most at Cohoes, was blissfully unmiked, allowing the cast’s strong voices to shine through.

This is a show worth seeing and a message worth hearing. Just remember what Officer Lockstock says: “This is not a happy musical”