Dueling appraisals of “Kiss Me, Kate” at Barrington Stage Company 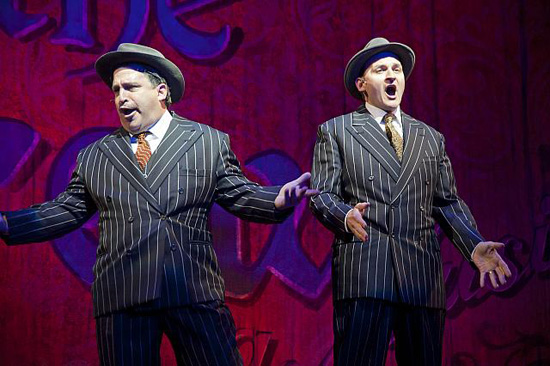 Dueling appraisals of “Kiss Me, Kate” at Barrington Stage Company

Gail M. Burns: Kiss Me, Kate is not my favorite musical but this production just blew me away. Everything about it was perfect. It was big and bold and colorful – non-stop action and comedy and dancing…I am out of superlatives. All I can say is Wowee-wow-wow! Whadda show!

Roseann Cane: Considered his most successful musical, Cole Porter’s Kiss Me, Kate opened on Broadway on December 30, 1948, and ran for more than a thousand performances, winning the first ever Tony Award for Best Musical. …Kate was produced rather late in Porter’s remarkable career –his first Broadway show, in 1916, was the far-less-well-received See America First.

Gail: I think I like Porter’s songs far better than the shows and films they were written for. By the time he wrote Kiss Me, Kate, most of which was penned right here in the Berkshires in the Porters home in Williamstown, he had already lived through a decade of constant pain following a riding accident that left him crippled. Delightful as it is, the song “Where Is The Life That Late I Led” takes on a rueful irony for Porter himself.

Roseann: Based on Shakespeare’s Taming of the Shrew, Kate is essentially art imitating life imitating art. A divorced couple reunites to go on the road with a musical version of Shakespeare’s play, and their backstage relationship parallels the action onstage. Actress Lilli Vanessi (Elizabeth Stanley) has become a movie star since her separation from Fred Graham (Paul Anthony Stewart), the swaggering, egocentric director and producer of the play. Lilli, although preparing to remarry, is still in love with Fred, hides her feelings until she receives a bouquet of flowers Fred had intended for someone else.

Gail: As soon as Stanley and Stewart were announced for the leads in this production I was hopping up and down clapping my hands. Stanley had wowed me last year in Barrington Stage’s boffo On The Town, which is headed for Broadway this fall. And Stewart was the best thing about the 2010 BTG production of The Last Five Years. (Review) I knew this pair could create the fireworks and the oversized bluster, ego, and talent Lilli and Fred require.

Roseann: Stanley is sensational–wildly histrionic, passionate, hilarious–a real firecracker! Her rendition of “I Hate Men” was insane (in a good way), and really captured the essence of both Lilli and Katherine as she created them.

It disappoints me to report that there was no yang to her yin. Stewart is a handsome man with a lovely singing voice, but he seemed to be in a different play. He was boyish; his manner, comparatively laid-back and naturalistic. For the show to work its magic, both Lilli and Fred must be larger than life, equally histrionic, with great inflated egos. (Think Liz Taylor and Richard Burton.) Lilli refers to Fred’s ego; later on, his dresser mentions his magnetism…neither made sense. I was unable to buy Stewart as a swaggering womanizer. His Fred seemed like a nice enough guy, but not someone Lilli would lust after. Their relationship was too darn cold.

Gail: I disagree completely. I thought that they were a great match and Stewart, although not a massive man, expanded himself as Fred/Petruchio to command the stage as a handsome, dashing star fully capable of winning Lilli/Katherine’s heart.

Roseann: Mara Davi as Lois Lane/Bianca was a treat to watch and to listen to. As Bill Calhoun/Lucento, Tyler Hanes was pretty terrific. That man can dance! And while we’re on the subject of dancing, kudos to Matthew Bauman (Paul). He led the ensemble in “Too Darn Hot”, perhaps the most exquisitely executed number in the show. What a pleasure to see Lorin Latarro’s choreography honored by such gifted dancers.

Roseann: I was very unhappy that certain liberties were taken with the Spewacks’ book. For example, it did not enhance the play for the gangsters to joke, “Guns don’t kill people…” Quite the opposite: it is jarring and distracting. The play and its language are firmly rooted in 1948. I also noted some adjustment to Porter’s lyrics. At the risk of sounding sanctimonious, I believe Porter’s elegant, sumptuous, witty lyrics do very well on their own, and we should treasure them.

Gail: While I am notorious as a theatrical purist, I didn’t mind the few anachronisms I noted. Yes, the “Guns don’t kill people” line was an obvious update, but the punchline was such a great pay-off that I didn’t mind. I also didn’t mind the few changes to the lyrics that I noted, even though I consider Porter’s lyrics far more sacrosanct than the Spewacks’ book. As a Gilbert and Sullivan fan I obviously worship at the altar of Cole Porter as a lyricist, but everything seemed copacetic to me.

My major objection was the poor balance on Ed Chapman’s sound design. The lyrics, whether modern or traditional, were hard to hear, and that was an unpardonable sin in my book. But that is also a relatively easy problem to fix and I am sure the pros at BSC will see to it promptly.

Roseann: I hope they do! I relish the idea of new generations of theatergoers appreciating Cole Porter’s lyrics in all their glory, one of the many reasons I’m glad BSC chose “Kiss Me, Kate” to open the season.