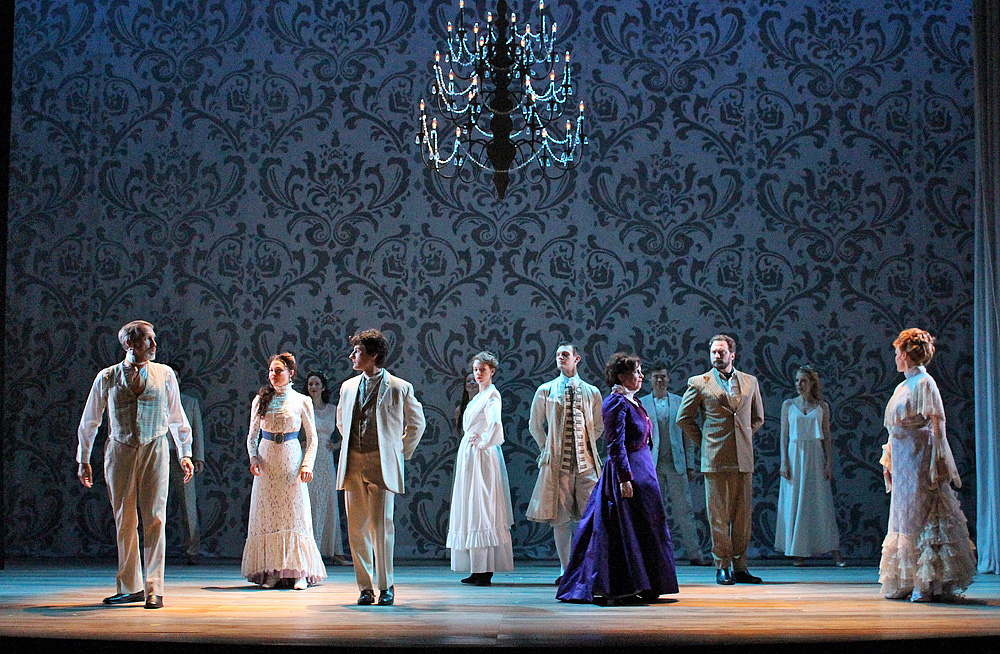 (All Photos by Reid Thompson)

A Little Night Music fills the stage at the Colonial Theatre
Theatre Review by Gail M. Burns and Roseann Cane

Gail M. Burns: Four couples meet, mate, and miscommunicate in the woods as Midsummer Night smiles three times – “First, for the young who know nothing, second for the fools who know too little, and third for the old who know too much.” No, not Shakespeare, although the parallels are obvious, but Sondheim as the Berkshire Theatre Group presents his delightful 1973 musical A Little Night Music at the Colonial Theatre.

Roseann Cane: The more Sondheim musicals I see (and see again), the more I’m astonished by the man’s genius. I cannot think of another composer and lyricist whose work displays such depth, breadth, and variety, who achieves the nearly impossible feat of transmitting intellect, wit, and emotion. This production is blessed by a cast gifted with sumptuous singing voices and some standout acting capable of rendering all three with ease and style

Gail: This is a score that I have loved and memorized and cherished in my heart for four decades, and, as with anything so personally meaningful, I find I have a hard time finding words to help others understand how beautiful this score is and how the incredibly clever and intricate lyrics are rendered easy enough to understand so that even someone who has never heard them before can follow along as they rapidly advance both plot and character.

Roseann: One of my favorite Sondheim musicals, A Little Night Music was inspired by a charming early Ingmar Bergman film, “Smiles of a Summer’s Night” (1955).

Gail: Bergman gave Sondheim and his directing/producing partner Hal Prince the rights with the requirement that they changed the title. Sondheim had wanted to use the title A Little Night Music, borrowed from Mozart’s serenade Eine kleine Nachtmusik, for his show Evening Primrose (1966) and was happy to apply it to this new venture.

There is no overture, instead the show opens with a quintet of singers who welcome us musically to Sweden, circa 1900, and Sondheim’s score which is set almost entirely in ¾ time.

Roseann: My heart sank a bit as the quintet began the elegant “Night Waltz.” Alex Sanchez’s choreography struck me as chaotic, and instead of ushering us into a diaphanous story of enchantment, the staging was clumsy and heavy-handed. There was a certain ungainliness to much of Ethan Heard’s direction, and this threatened at times to undermine the ethereal beauty of the show. A banquet scene where several actors had their backs to the audience for the entire scene was downright unsettling.

The cast of A Little Night Music in an opening scene. Photo by Reid Thompson.

Gail: It is not at all unusual to stage the banquet scene that way. In the original Broadway production Prince had the entire cast except for Mme. Armfeldt seated with their backs to the audience. I thought Heard did a nice job of staggering the players around the table so that they were easily visible from several directions.

Roseann: Alas, I never saw the original production, but I have to believe Prince had his downstage actors in profile for the most part. To stare at the actors’ backs was (to me, anyway) unpleasant, especially when I found it difficult to discern who was speaking. And I have to disagree with you here, Gail. I felt the back-facing actors obscured most of the actors who were seated upstage.

Gail: In general I felt his staging was quite fluid even though I found Reid Thompson’s set occasionally cumbersome and lacking in charm. No question which budget item was trimmed in this production! But I would rather have wonderful singers than breathtaking sets for this show if I had to choose, and clearly someone did.

Roseann: For the most part the cast rose above these glitches, and somehow managed to celebrate Sondheim’s masterpiece just as it should be, at once gossamer and lusty and poignant.

Gail: A Little Night Music has wonderful roles for women of all ages, and the BTG has scored a stellar line-up, with Emma Foley, who will be a freshman at Taconic High School in the Fall, as the young Fredrika Armfeldt, Philippa Soo as the 18-year-old Anne Egerman, Monique Barbee as the lusty 20-something maidservant Petra, Kate Baldwin as the 30-ish Countess Charlotte Malcolm, Maureen O’Flynn as the 40-something actress Desiree Armfeldt, and Penny Fuller as her 74-year-old mother and former courtesan Madame Leonora Armfeldt. Each is well suited physically and vocally to her role and Heard encourages each to make the most of the individual moments Sondheim and librettist Hugh Wheeler give to their characters.

Roseann: O’Flynn has an exquisite voice. Her rendition of “Send in the Clowns” brought me to tears. However, as an actress, she seemed lacking in qualities that make Desiree Armfeldt the heartbeat of A Little Night Music. I wished she oozed passion, magnetism, and a star’s inflated sense of entitlement. To think how much more powerful her deflation would have informed her character! Her “Send in the Clown”s with that added dimension would be almost unbearably heart-wrenching.

Gail: I agree. While O’Flynn is considered a star in the Berkshire firmament, she lacks the “star quality,” that certain indefinable something, that the role of Desiree demands. According to a recent article by Jeffrey Borak in the Berkshire Eagle, O’Flynn said suggesting she play Desiree was a “no brainer” for her when BTG Artistic Director Kate Maguire asked her what she might like to do with the company. It is a dream role for every female performer over 40, but it is not a role for a singer. O’Flynn has almost no chance to use her operatically trained voice here, and while her rendition of “Send In The Clowns” was beautiful to listen to, I felt it missed some of the important character development inherent in the lyrics.

Roseann: I was delighted to see the accomplished Penny Fuller’s consummate portrayal of Madame Armfeldt. I’ll spare readers my rant about mic’ing and amplification, except to say that I bristled at times when I felt robbed of a lyric that came across as muffled or distorted because of the technology. I never had that frustration with Fuller, whose projection and enunciation were as full, round, and crisp as I could have hoped for. Add that to her prodigious embodiment of her character, and you have a triumph of casting.

Gail: I thought Baldwin and Rowat were wonderful together, which is not always the case when real-life marrieds perform together. They just looked like they were having so much fun, and I was happy to join them in their romp.

Roseann: Soo, as the young wife of Frederik Egerman (the wonderful Gregg Edelman), is very pretty and well-cast, but her sexual teasing of her stepson, Henrik (Matt Dengler), early in the show needing some reigning in. Anne, after all, is innocent; Soo came across as bawdy in those scenes. Had her teasing of Henrik come across as more unconscious, her later awakening would have been that much more powerful.

I loved Dengler’s Henrik. His creation of an immature, histrionic, depressive young man was surprisingly moving.

Gail: While this is a woman’s show, the men’s roles, and singing parts, are equally rich and challenging and the men in this company do not disappoint either. I have always been a big Henrik fan – “Later” is one of my favorite solos in the show – and Dengler, who understudied this role in the 2009 Broadway revival, was a perfect fit.

While the set was clearly underfunded, Oliver Wason’s lighting design added depth, especially in the second act twilight scenes in and around the Armfeldt family manse. David Murin has designed gorgeous costumes for the ladies that not only flatter their figures but suit their character’s personae and stations in life.

Roseann: Most of the costumes were smashing. I’m not so sure about the simple dresses worn by the lovely ladies of the quintet. I imagine the Grecian lines of the cream-colored gowns was intended to suggest a Greek chorus—and these women do serve that purpose—but the juxtaposition of those gowns with the turn-of-the-(last) century attire didn’t work for me.

Gail: I know there are many who don’t like Sondheim because his musicals don’t fit traditional 20th century American expectations for big dance numbers and happy endings, or because they don’t find his music melodic in the Rodgers and Hammerstein mold. While A Little Night Music is indeed lacking in flamboyant production numbers, I cannot think of a musical more lushly melodic or with a more satisfying romantic denouement. I hope that the Rodger and Hammerstein crowd who turned out for Oklahoma at the Colonial last summer will return to give Sondheim one more chance.

Also, A Little Night Music runs three hours and is considered by some almost an operetta – it is frequently performed by opera and light opera companies – with little action and no big dance numbers. One of the New York critics dubbed it an “adult musical” when it first opened, and it is, not because it is smutty or violent but because it is about grown-up people, and people striving to grow up, dealing with the mundane but very real needs we all have to be loved, desired, needed, and cherished in our intimate relationships. I wouldn’t bring young children to this show – they will be bored – but anyone over 14 of a romantic, theatrical, and musical bent will be delighted with this production.