“A Great Wilderness” at WTF: A story about evangelicals who think they can ‘pray the Gay away’ 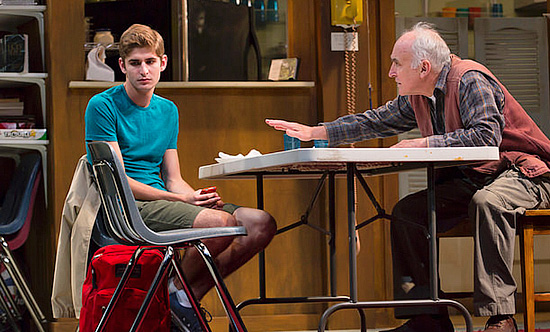 “A Great Wilderness” at WTF: A story about evangelicals who think they can ‘pray the Gay away’

Larry Murray: If the purpose of this play is to evoke a visceral reacion, it has succeeded beyond the playwright’s wildest dreams. I hated it.

In the program notes, playwright Samuel D. Hunter prepares us for A Great Wilderness by revealing that “I wasn’t completely sure I even wanted to write the play.” As a gay man who just saw it I would like to state, gently, that I am not sure I really wanted to see the play, either, Sam.

Still you have to give points to the Williamstown Theatre Festival for having the audacity to undertake it. WTF has a real passion for exploring the human condition so it fits right in with their dramatic profile, focusing more on the people than the issues as a way of trying to understand them.

Gail M. Burns: I wanted to see it. I find the question of “curing” or “fixing” LGBT people as abhorrent as you and I don’t understand the mindset that finds it not only a rational idea, but a necessary one. I came away with a better understanding of the fundamentalist Christian worldview.

Director Eric Ting strived for realism in the dialogue, an admirable choice, but did it so well he left much of the audience, many of whom are older ticket buyers, wondering what was actually being said as Walt tried to assure Daniel there would be no shock therapy, just prayer, conversation and the isolation of the woods where there were no signals for the teen’s smartphone.

Gail: Despite my own hearing loss, I am famous for being able to hear and understand every word spoken or sung on a stage – even when I can’t hear my own husband sitting next to me (usually something about washing the dishes) – but even my well-tempered ears strained to hear much of this play. I heard it, but it wasn’t easy! I would suggest that either the actors project or some area mics be employed.

Larry: Perhaps there was such a need to portray everyone as calm and rational that real acting was discouraged in favor of a conversational recitation of the lines. This is the first play I have seen that was directed by Eric Ting, and I am not overly impressed. His direction was a bit leaden and the performances repressed which could suggest some discomfort with the subject at hand. And the needs of the audience were neglected, an audience shouldn’t struggle to understand the actors. The constant urge to come across as non-threatening simply sunk this dramatic story from the getgo.

That said, the play continues as Walt’s ex-wife Abby (Mia Dillon) and her husband Tim (Kevin Geer) arrive. The plot thickens when they realize the kid has not just gone for a short walk, but has gone missing. For the next half hour we watch these clueless people talk about it, pray over it, and bicker over the disposition of the cabin after Walt goes into an assisted living home. He has memory lapses and has taken a bad fall, yet seems to still be entrusted with the responsibility of keeping his young charges safe.

In terms of acting, there isn’t much here for an actor to sink their teeth into, but that seems deliberate. Hunter seems obsessed with portraying middle America faithfully, which means that the characters are pretty colorless. What little internal turmoil that may exist is channeled through minor bickering that passes for debate and discussion in a television and Facebook saturated populace.

Whether the playwright is aware of it or not, the play contains remnants of Stockholm Syndrome. Hunter often talks about his evangelical upbringing in both the program notes and inerviews, which seems to suggest that he still identifies with and perhaps clings to elements of his own oppression. This is revealed by the way he so carefully avoids really letting the fur fly in the debates. The heat got raised in only two exchanges that could be labeled emotional.

Gail: At first Walt refers to Abby and Tim as his “old friends” and long-time colleagues who are going to take over his “conversion camp” set deep in the Idaho wilderness when he retires – Daniel is in fact his last “boy” and Walt has already packed his belongings for an imminent move to an assisted living facility. But we quickly learn that Abby and Walt were married and had a gay son named Isaac who figures large in the story. Like the Biblical Isaac, this young man is sacrificed on the altar of his parents’ beliefs. Unlike the Biblical Isaac, God allows no last minute reprieve…

Larry: It is disappointing when issues are not confronted directly, but instead peripheral arguments are employed. Many thinking people do not suffer such nonsense well in real life, and to listen to Hunter’s clueless characters yammer on for two acts to figure out something that is obvious is a disappointment. Playwright Hunter made the wrong choice in terms of what people are actually interested in. For one thing, Walt speng his adult life attempting to convince young gays to repress their sexual orientation to conform to a minority’s beliefs using the Bible as his authority. Yet he has no psychological or sociological training to even begin to understand the complexities involved. As it turns out he was gay himself, and simply bottled it up, as people of my generation often did.

Gail: While Walt never claims to have been able to “cure” himself, he married a woman and fathered a child. But now he lives alone, devoted to “helping” others do what he has failed to do himself.

Larry: Rather than developing much genuine empathy for Walt and the mother, I did get a better grip on their rationalizations. I suppose there was not one fresh idea to justify conversion therapy because there is none. It cames down to forcing your will on another person. The mother saw it as acceptable to make sure the teen inhibited his natural self for all his remaining life so that he could enjoy eternity in heaven instead of hell. But her idea of heaven is hell to many gays since all the righteous scolds plan to be at the head of the line at the pearly gates. I know it is the last place I want to end up.

Gail: There are two mothers of gay sons in this play, Abby and Daniel’s mother, Eunice (Mia Barron), and they both ultimately decide that their sons are better off out of this world than in it. As a mother, I can understand Abby using her faith and its teachings to help her cope with an otherwise unendurable pain, but Eunice’s passive acceptance of her god’s will puzzles me. I guess that I live very far from their reality, but I would rather have a son living as God made him, than a god who finds his creation so wanting that it should not be allowed to survive. Even the jealous god of the Hebrew scriptures offers humankind several second chances.

Gail: Daniel vanishes after leaving Walt to take a hike. Another theme in this play, and one that I found large enough to be distracting, is Walt’s obvious aging issues and the possibility of the onset of some dementia. He cannot recall Daniel’s parting words, which may contain a vital clue to his mindset at departure. While he is gone, lightning sparks a wildfire, and Daniel finds himself contemplating a “fiery furnace” of hellish proportions. This play is just replete with overt biblical references and names.

Larry: The set was appropriately depressing and shabby, complete with a cross above the door. Tacky, cheap and with a TV blaring during many of the actor’s exchanges it conveyed a feeling of isolation and depression. The sole redeeming event in the whole play was Daniel bringing some heritage tomatoes with him in his backpack. It was a nice contrast to the simple bologna or turkey sandwich he was offered when he arrived on what looked like white bread.

Gail: There is complex symbolism in Daniel’s attraction to heirloom tomatoes. Here’s how Wikipedia explains it: “Heirloom seeds ‘breed true,’ unlike the seeds of hybridized plants. Both sides of the DNA in an heirloom variety come from a common stable cultivar, in contrast to hybridized seeds, which combine different cultivars.” The words “homogeneous” and “heterogeneous” could be applied. In other words Daniel is drawn to aspects of God’s creation that live by their own rules rather than those applied by science/society. My head is starting to hurt…

Larry: A Great Wilderness succeeded in one way – it caused me a sleepless night as I tried to put my finger on what went wrong with it to make me so cross. Of course any playwright that causes someone to lose sleep would think they succeeded in making people think, But in this case, it dawned on me that the play itself ends where it should have begun.

Consider the course of the tale. With the 16-year-old ten miles off in the woods, Walt questions whether his life of trying to turn gays straight was actually a good thing, and whether he succeeded in his mission. Then at the end of the play the boy returns, a bit bloodied but convinced that the raging forest fire was a message from god about hell. The roles are reversed as Walt is not sure he want to continue his work and the gay boy thinks he needs to be repaired.

So if there is ever A Great Wilderness II it might prove to be a far more interesting play than this one. Rework the dialogue of the two act play to make a tighter first act, and then began Act II where this play leaves off, with the kid having found God and the amateur therapist questioning his basic beliefs.

Gail: I slept, but dreamed of Walt and his work in the wilderness in odd ways that morph into the issues raised by The Whale, the next play by Hunter that we will see and write about.

Whether theatre makes us happy, sad, or angry, it is only bad theatre that leaves us bored. Hunter set out to write a provocative play and he has succeeded. If the WTF can surmount the sound problems at the Nikos – the play can evoke no response at all if it cannot be heard – then they will have succeeded in mounting a strong production. This is not light summer fare, but it is well worth seeing and hopefully will open up new dialogue about issues of human sexuality and faith.