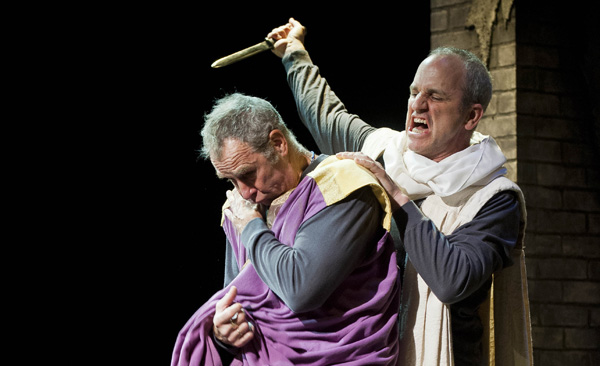 Roseann Cane: In her Director’s Note, Tina Packer, Founding Artistic Director of Shakespeare & Company, states, “It seemed to me that depicting the moment Rome stopped becoming a Republic and started evolving into an empire could be done with seven actors as easily as 70. In fact …the heat and focus within a small space could be sustained better with a small cast.”

Gail M. Burns: While “Bare Bard” concept is becoming old hat to me, for a newcomer to the concept, or even to Shakespeare, I understand how this is an exciting approach. As Packer said in an interview, “You are always in the ‘money shot.’ There are no boring bits.” A small cast and a pared down script means everyone has to keep moving, and that condensation of action means that the brutality is emphasized as the body count mounts up swiftly. Neither characters nor audience can escape the political forces at work, which is a morality tale we need to hear today.

Roseann: I applaud that concept, especially since I have the impression that directors of Shakespeare’s plays seem ever more inclined to place them in every era except the one in which they were written. That’s intriguing every now and again, but for the most part, one gets the impression that exotic locations and recent times are chosen for the sake of adding color and parading period costumes. To experience a Shakespearean play skillfully directed and performed by fine actors is to experience a Shakespearean play with all its timeless truths and sumptuous language—without distraction.

Gail: The temptation to set Julius Caesar in a more contemporary era is strong at the moment, and I agree that Packer is wise to let it rest in Shakespeare’s imaginary ancient Rome. One thousand five hundred and fifty-five years separate the actual assassination of Julius Caesar from the time Shakespeare wrote about it, and there are several anachronisms right in the script, notably the chiming of public clocks.

Roseann: Packer’s production adheres to her concept, sometimes. Some of the seven actors are superb. Others don’t morph into different characters successfully, and that’s no small problem since all are playing multiple roles. The production strays from Packer’s stated concept frequently when, usually during monologues, the five or six actors not directly involved in the action move to another part of the stage and engage in movement, pantomime, and interpretive dance that dilutes the scene rather that enhancing it. During these times, I longed for “Bare Bard,” to quote Packer.

Gail: Well five of the seven actors are new to this production in its staging here in the Berkshires. Only Nigel Gore (Julius Caesar and others) and Jason Asprey (Cassius and others) started with this production as it began at the Orlando Shakespeare Festival in Florida and proceeded to the Prague Shakespeare Company in the Czech Republic earlier this year before returning home to Lenox. And I wonder if the mime and movement wasn’t incorporated in order to engage non-English speaking audiences in Europe?

Roseann: But each actor speaks in a different American or British accent or regionalism, and each maintains said accent, no matter which character he or she morphs into. That can’t have helped non-English speakers! And that some of the actors called Antony “Anthony” irritated me no end. That sloppiness has no place in a troupe as well-established and celebrated as Shakespeare & Company.

Nigel Gore, an accomplished actor, played Julius Caesar with a cockney accent, and all of the five additional characters he played were Cockneys too. Eric Tucker’s Standard American-accented Brutus (and Flavius, and others), did not mix well with the handsome actor’s rather superficial delivery, and even in scenes that cried for depth and emotion, he came across more like a contemporary television-game-show host than as a grieving widower or friend.

Gail: I too found Tucker’s Brutus jarringly out of place in this production. And for the first time in my long history of seeing Gore on stage I found him hard to understand.

Roseann: But long live Kristin Wold, whose performance(s) radiated heart and power! She managed to create no fewer than eight distinctive characters, Calpurnia, Lucius (Brutus’s boy servant), and Portia among them, making some immediate transitions seamlessly.

Gail: Kristina Tollefson has designed some excellent, flexible costume pieces, all starting with basic black cargo pants and gray long-sleeved top. Flowing vest-like pieces that fall from the shoulders drape and wrap to resemble togas and color is used to distinguish rank and political affiliation. Neck scarves become hoods. Black berets signify military engagement. I never had any trouble figuring out who was who or what side they were on.

Roseann: James Udom, making his debut at Shakespeare & Company, was astonishingly good as Marc Antony, and I am eager to see more of this gifted actor. His delivery of the familiar “Friends, Romans, and Countrymen” speech navigated uncharted territory; his magnetism and connection with all his characters as well as his fellow actors was palpable throughout.

Gail: Again I heartily agree. Wold and Udom were stand-outs in every respect.

Roseann: I enjoyed Jason Asprey’s energetic and passionate Cassius. Asprey managed to transition to and from his three other characters successfully and with great presence.

Gail: Asprey has matured into a new phase of his acting career, and done so with alarming speed and grace.

Roseann: Britt Sandusky’s sound design and Matthew Miller’s lighting design married well with Packer’s concept, and it’s worth imagining how much more potent this production would have been had their work supplanted the interpretive movement.

Gail: Because this production started out in a different performance space and was intended to tour, I wonder how much impact the awkward shape of the Elaine P. Bernstein Theatre had on what we saw. While I will credit Packer with knowing the space well and managing to create exciting stage pictures even from the odd angle at which I was viewing the show, there have to be enormous constraints to working in that theatre.

Cast Change Announced: Shakespeare & Company’s Dennis Krausnick, a founder and also Director of Training, steps into the title role of Julius Caesar for a brief run beginning July 15 through August 2. Nigel Gore, who has been playing Caesar since it opened several weeks ago, takes a short-term leave from the show after this weekend’s performance on Sunday July 13—Gore will be back in the role Saturday, August 9. Krausnick was last seen on stage in the Playhouse in 2012’s King Lear in the title role.