“4,000 Miles” a satisfying evening of theatre, well done at Oldcastle in Bennington (VT) 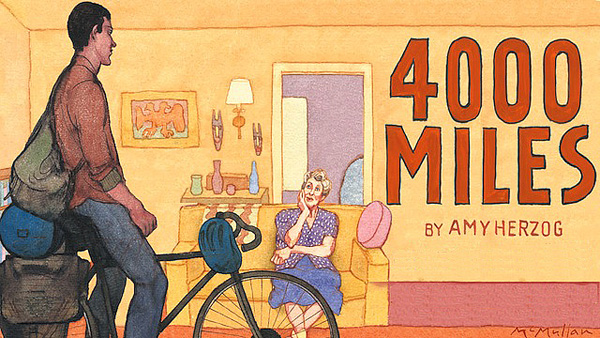 “4,000 Miles” a satisfying evening of theatre, well done at Oldcastle in Bennington (VT)

Larry Murray: Since summer began, it feels like we have traveled some 4,000 miles in search of great theatre so it was nice to come back home to Bennington, Vermont’s Oldcastle Theatre after another busy week on the road. Granted it is not really our home, but it feels like one nevertheless. We can always count on director Eric Peterson to never settle for the adequate, whether it be in the acting, scenery or choice of plays.

Gail M. Burns: This is a most satisfying play theatrically and emotionally. This is a play about healing, which can be an agonizingly slow and uneventful process in real life, but which Herzog crafts into a suspenseful narrative with characters we really come to care about. Peterson has assembled a top-notch cast and Richard Howe has designed another detailed set which uses the Oldcastle performance space to bring you right into Vera’s Greenwich Village living room.

More and more in this region “summer stock” is less about happy musicals and Neil Simon comedies and more about small, thought-provoking new plays. Herzog’s After the Revolution had its world premiere just down the road at the Williamstown Theatre Festival in 2010, so this 2011 sequel play has a built in audience. That play won Herzog the New York Times Best Playwright Award, while 4,000 Miles won the 2012 Obie Award for Best New American Play and was nominated for the Pulitzer.

Larry: I loved After the Revolution, Gail. (Review) I have a soft spot in my heart for plays and films about grandmothers and troubled grandsons, and 4,000 Miles did not disappoint, even as it took us in fresh new directions in the complex relationships between skipped generations. Janis Young as Vera Joseph was the perfect senior, fumbling with her hearing aid, her teeth, and her memory, she still gave of her heart and home to long-absent Leo Joseph-Connell (Andrew Krug) who had just completed a 4,000 mile cross-country bicycle ride from Seattle to New York City.

Gail: Leo is actually Vera’s step-grandson. His mother was the youngest child of her late second husband. He has suffered a tragic loss while on his cross-country journey, and the way he handled that crisis, and himself in its aftermath, has angered his family and his New York-based girlfriend, Bec (Hannah Heller). Heller had the difficult job of having to enter both of her scenes in a high state of emotion and stress, the causes of which are only obliquely revealed by the end. Hannah is an important part of the play, but it is not about her.

Larry: In short order Grandma Vera had fed him, laundered his sweaty clothes, and put some cash in his pocket as he searched for a rock wall to climb, and ultimately a computer she had stowed away which brought him back in touch with his adopted sister Lily back home in St. Paul, even as he remained estranged from their parents. What I think Herzog’s writing captures in a way few others can match is the volatility of our relationships with each other, and a sense that even with two very flawed characters – both Vera and Leo were often brutally frank with each other – there was an acceptance, an unconditional love between them.

Gail: While I sometimes found Janis Young hard to hear, both she and Krug had excellent chemistry right from the start. I totally believed that they were family.

Herzog’s own family provided the inspiration for the Joseph family depicted here and in After the Revolution. Her grandmother, Leepee Joseph, upon whom the character of Vera is based, worked with the Group Theatre and was Mary Martin’s personal assistant. Herzog’s biological grandfather and Leepee Joseph’s first husband was songwriter Arthur Herzog, Jr., who penned “God Bless the Child” and other standards for Billie Holliday. Her step-grandfather, Joe Joseph, Leepee’s second husband, shared government secrets with the Soviets during World War II. Herzog herself cycled across America in 2000 and her bike was used as a prop in the production of 4,000 Miles at Lincoln Center in 2011.

Larry: What I liked about Krug’s Leo was his ability to deliver a solid, sincere hug. As much as the grandmother needed such tactile affirmation in her life, her troubled step-grandson may have needed it every bit as much as she. Even with his opportunistic pickup girlfriend Amanda (Julie Chen) he observed boundaries and avoided leading her on for the sake of a quick roll in the hay.

Gail: There are clear reasons why that hook-up would have been very unhealthy for Leo, and that scene was a real turning point for his character. After that I knew that there was hope and that the ending of the play would be upbeat rather than tragic. Chen was delightfully flakey as the slightly tipsy Parsons co-ed who Leo rather crassly uses and abuses – but not in the ways you might imagine. Amanda leaves emotionally wounded and as clueless as she was at the outset as to the role she has unwittingly played in Leo’s healing process.

Larry: There were two very moving scenes late in the play, the first where Grandma Vera listened intently as he recounted the death of his friend. It had both intimacy and inordinate power. And in the final scene, as he showed us what a gentle soul he was capable of being, his elder relative showed a generosity of spirit as they worked on a short eulogy for the neighbor across the hall. Of such simple elements is great theatre born.

Gail: Oldcastle has a reasonable top ticket price of $37, but is offering a Buy-One-Get-One discount for this show, knocking the total price for a single ticket, fees and all to a few pennies over $20. There is no better theatre for the money available now in the region. Fans of Herzog…

Gail: …should not miss this opportunity!