Bright, quirky “Out of the City” premieres at Dorset (VT) Theatre Festival 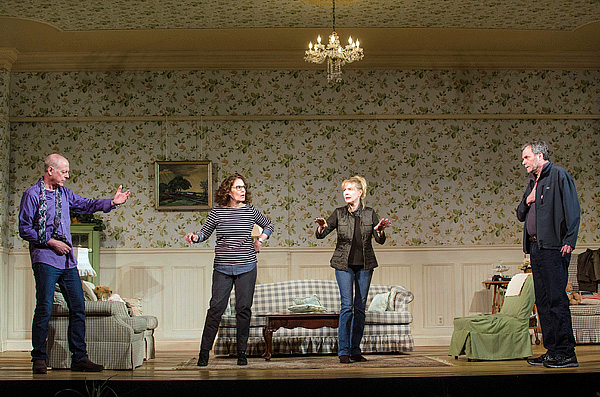 Bright, quirky “Out of the City” premieres at Dorset (VT) Theatre Festival

Out of the City premieres at Dorset Theatre Festival
by Gail M. Burns and Larry Murray

Gail M. Burns: The bright and quirky dialogue of Leslie Ayvazian comes through loud and clear in Out of the City, her new play being given its world premiere at the Dorset (VT) Theatre Festival.

Larry Murray: It’s a lightweight summer comedy where two couples meet at a cottage in the Poconos for a weekend to celebrate Carol’s 60th birthday. Carol is played by the playwright, Leslie Ayvazian, who is both sharp as a tack and a total ditz. Her husband Matt (Mark Blum) watches what he says in front of her. If you have ever spent time enjoying people who employ circumlocution and vagueness as their standard form of interacting with people near and dear to them, you will adore this play. In fact it might even be a communicable trait judging from the four characters, who often sound just like Carol, who is clearly the female alpha dog.

Gail: I am not sure anyone is “alpha” here, although Matt and her good friend Jill (Janet Zarish) are anxious to please Carol on her special birthday. They seem to have no plans and no knowledge of the area they are visiting. Narelle Sissons’ set was nondescript, uninteresting, and awkward as it struggled to incorporate both interior and exterior locations. It was also so wide that it dwarfed the actors, who director Dina Janis seemed content to bunch up around the furnishings center stage.

Larry: The play prides itself on its careful observation of human nature, and the two married couples who have been together for a long time, seem averse to surprises. And the weekend brings several to test their long friendships, marriages, and expectations of each other. Out of the City has received workshops at the Manhattan Theatre Club and the Southampton Writers’ Conference. It will be reprised in 2015 at the Merrimack Repertory Theatre in Lowell, MA.

Gail: It was refreshing to see a play about normal long-married folks. Neither couple is in crisis or harboring any dark secrets. This is just day-to-day stuff – Matt is no good at selecting gifts, Jill likes to travel and her husband Dan (John Procaccino) doesn’t so she flits off while he stays at home searching for the perfect basketball court, Carol is worried about her milestone birthday…nothing earth-shattering. And while it is nice not to be forced to sit through other people’s angst, this is theatre and it would also be nice if something happened.

Larry: I did find the coming and going of the husbands to be funny, as if neither of them wanted to be in the company of their wives for any extended time. Mark Blum as Matt and John Procaccino as Dan were stereotypically competitive with a streak of one-upmanship often coming to the fore, and yet their decades long relationship was clearly built on chance and posturing, not real substance. How did you interpret the connection between Carol and Jill, Gail?

Gail: We were told so little about any of the four characters that it was hard to understand their connections, or care about them. How did these folks meet? How long had they been friends? Had they met as couples or had any of them been friends before marriage? What did they have in common? Except for Dan who worked as a coach, presumably of basketball, we were never told what the others did, or had done, for a living. What were their hobbies, talents, passions? They briefly mentioned children, presumably grown ones, but we never learned their names or ages or anything about them. Were their children friends, had they been raised together? No one’s cell phone ever rang… Who ARE these people?? The actors were appealing and did their best with the cyphers they were asked to play.

Larry: The dialogue was stilted in the extreme, much like overhearing a random conversation without knowing the people or their backgrounds since, as you said, there was no backstory here. What is up with that style of playwriting, where we just see the inner workings of cluttered minds?

Gail: I have no idea how Out of the City compares with Ayvazian’s other works although she has met with success and obviously has her fans. Her play Nine Amerians won both the Roger L. Stevens and Susan Smith Blackburn awards back in the mid-1990s. She is an accomplished character actor with several TV and film credits to her name. In 2002 she brought her one-woman show High Dive to the Chester Theatre Company where it was successful enough that they are restaging it this year, with actress Jennifer Rohn in the lead, as a special fund-raising event for their 25th anniversary season July 22-24. chestertheatre.org

Larry: In the second half of the play, when the couples began to argue over the two wives kissing, and then the husbands decided to try it themselves, I started to think that all that had gone before was the lead up to some contemporary Neil Simon situation comedy laughs, but all too soon that died down and we were back to discussing “What did you mean by that?” and “Wait a minute, you’re jumping to conclusions.” I looked forward to the scenes when the story left the house and went to the shore of some Poconos pond. They provided a much needed respite from the enervating nattering.

Gail: These are characters are liberal, upper-middle-class, white New Yorkers. The idea of two women, or two men, sharing a kiss, whether out of curiosity or genuine passion, would be neither novel nor shocking to them and it is hardly enough of an event to build a whole play around. Although the kiss is slightly more meaningful and provoking for the women than for the men, neither event changes their lives. So why should I care?

Larry: In summary, it is an interesting, if ultimately vapid play for me, Others may enjoy the evasive relationships and word games. If I were grading I would give it a C- and suggest they could rewrite and resubmit it with a tighter, clearer point of view.