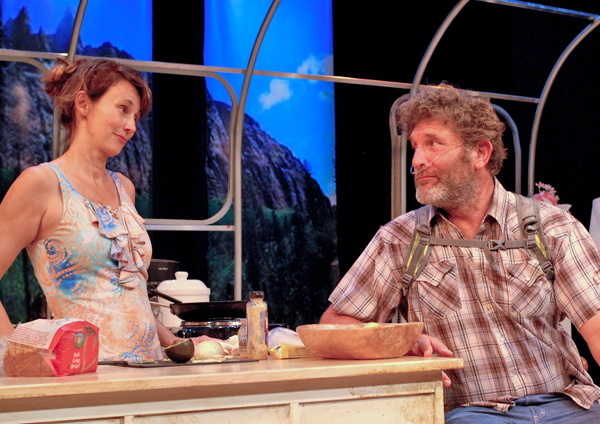 Larry Murray: Of all the curtain raising lines I have heard, none is quite as original and riveting as that which opens Sharr White’s Annapurna. The lights come up, the sausages are sizzling in a pan on the stove, and there is Ulysses (Daniel Riordan) totally bare-ass, with his posterior hanging out of a chef’s apron not much bigger than a loincloth as his ex-wife, Emma (Michelle Joyner), shows up after a twenty-year break-up. His jaw drops and all he can say is “Holy Crap” over and over.

Gail M. Burns: That was a moment, alright. As diligently prepared journalists you and I were braced for some level of nudity, but our fellow audience members were not and there was considerable whoop and chatter during those early minutes of the play. If bare bottoms offend you, be forewarned!

Larry: Annapurna is a great rarity in theatre, an intelligent, brilliantly conceived concoction of intimate relationships that has a big mystery at its center. The once passionate couple have a son, Sam, but something happened that caused Emma to flee with him in the middle of the night, and Ulysses has spent two decades trying to figure what it was.

Gail: Meanwhile Emma has been trying to figure out why she and Sam have not heard from Ulysses on the subject. He is now living alone in a filthy trailer in Paonia, Colorado – a town Ulysses refers to as the “armpit of the Rockies.” He receives disability, food stamps, and about $12 a month in royalty payments for the collections of poetry he penned decades earlier. While he has managed to conquer his alcohol problem cold turkey, he has smoked himself into an early grave. The oxygen tank is the result of “lung reduction” surgery due to emphysema. He is dying just at the point when his son, now 25, wants to come and meet him.

Larry: At first I was totally put-off by both husband and wife, but Sharr White was having none of that as he slowly revealed the great and almost irrational love that still bound the two together. and the reason for the visit. As Emma, Michelle Joyner played an urbane, yet time-worn woman who had an unspoken mission to accomplish. Her compassion alternated with her rage at her ex-husband’s human failures that had led to his terminal condition. As the play unfolded, when the emotions ran high, he gasped for air. Emma would stop her probing and tend to his needs for a while before picking up the accusatory cudgel again.

Gail: One of my few complaints about this production was that Riordan looked way too robust for a man dying of a lung ailment. His color was too pink and healthy. Considering the state of undress in which he had to appear, the use of make-up to make him look paler and bluer would have been impractical, but casting an actor who looked more frail would have helped.

Larry: When it comes down to actors on stage, they have to keep the energy level high, and yet not drop their voices so low as to prevent the audience from staying with them every step of the way as the play moves on. I took the full-voiced Ulysses as a writer and poet who refused to give in to his affliction, and to dare his own health by living full tilt, even with the oxygen tank strapped to his back.

Gail: Again, I doubt that one can muster that much voice after lung reduction surgery. Obviously I really appreciated the fact that both Riordan and Joyner were easy to hear, but Riordan could have coughed and wheezed more to emphasize his frailty and affliction without sacrificing the strong projection required of an unmiked actor.

Larry: I love Sharr White’s play writing because he includes detailed stage directions so that a director – in this case a solid Robert Egan – can shape the story to maximize its effectiveness in their theatre. While hints, tips, and pauses are there for the actors, the blocking is not specified, and here is where Egan kept the play moving in and around the mobile home with a distant Mount Gunnison (part of the Rockies in Colorado) visible through its one large window.

Gail: The production values are always high at Chester and here Vicki R. Davis has crafted a detailed set that is both realistic – including a working kitchen – and impressionistic – the large, highly colored photograph of Mount Gunnison, divided like a triptych.

Larry: It’s a complex story to tell in 90 minutes, and both the Gunnison and the Annapurna massif in Nepal serve as a metaphor for the wall that has separates husband and wife. And it seems that they must – together – scale that immense wall of time and unresolved questions before they can find some sort of peace and understanding.

Larry: The shocking opening scene fades in importance when we discover that the core of the mystery is to figure out what took place on a long-ago night that drove Emma to leave, taking 5-year-old Sam with her, and then cutting off all communication with Ulysses. There were times when the writing became a bit melodramatic, but as writers we know that once in a while you just have to say: “Holy crap!” and connect to the audience’s emotional hot buttons. All good playwrights ultimately find a way to touch us, and Sharr White succeeds with Annapurna. In fact, everyone at Chester has once again managed a memorable evening of theatre that is both down in the dirt gritty while also delivering some pretty beautiful artistic high notes that linger long after the drama itself dies down.

Gail: Frankly, the partial nudity is gratuitous, but it does provide a laugh (buttocks are just inherently funny) and a sharp initiation into the isolation of Ulysses life. With it, White brings us right into this couples’ reality and holds us there. And although they are both angry with each other, they are never cruel or abusive, like, say, George and Martha in Who’s Afraid of Virginia Woolf? They are intelligent, likeable people who desperately need to reconnect before Ulysses passes away. They MUST have this confrontation, these conversations, and taking that journey with them makes for riveting theatre.