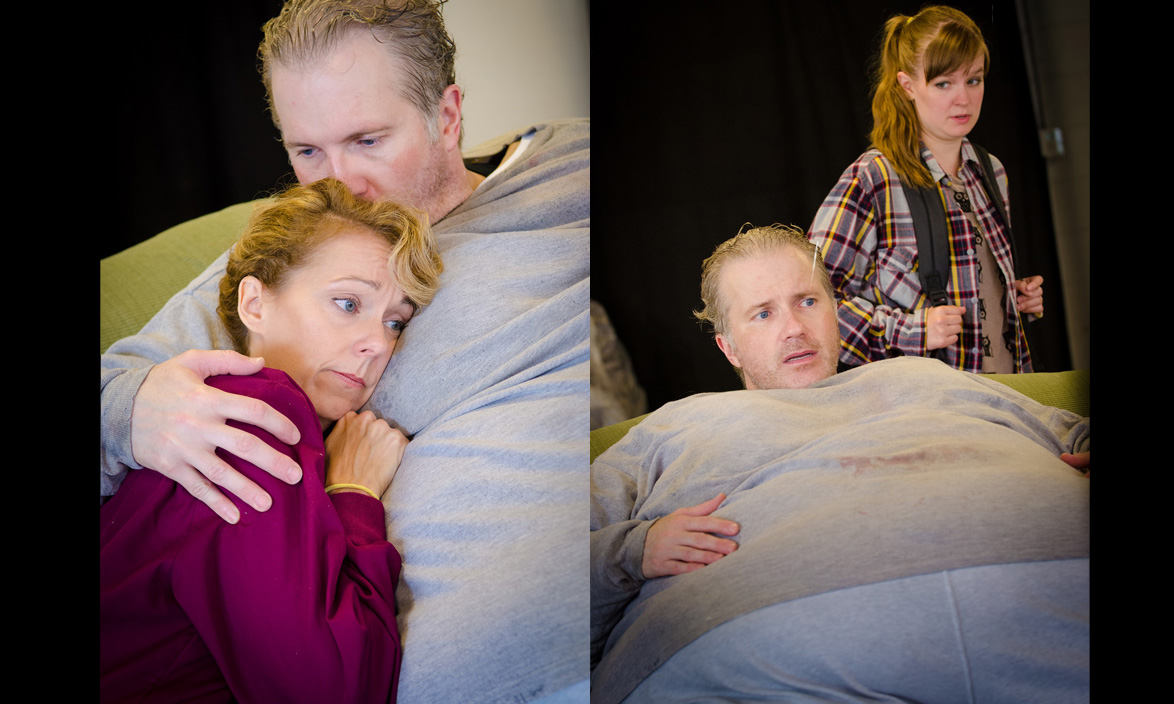 I was very saddened by [Moby Dick], and I felt many emotions for the characters. And I felt saddest of all when I read the boring chapters that were only descriptions of whales, because I knew that the author was just trying to save us from his own sad story, just for a little while. This book made me think about my own life…’ – Samuel D. Hunter, The Whale

The Whale won both the 2013 Drama Desk Award and the 2013 Lucille Lortel Award for Outstanding Play, as well as raking in a Drama League and Outer Critics Circle nomination for Best Play. It tells the story of Charlie (Timothy Carter), an educated gay man in his 40’s who teaches college-level expository writing courses online from his home in Idaho. He has been divorced for 15 years from his wife, Mary (Lesley Gurule), who has full custody of their now-teenaged daughter, Ellie (Betsy Hogg), who is angry, rebellious, and on the verge of flunking out of high school. Since his marriage ended, Charlie has been in a relationship with Alan, whose death ten years ago has left Charlie lonely and heartbroken. His closest friend is Alan’s sister, a nurse named Liz (Brenny Rabine). Alan and Liz were both raised in the Mormon Church, and, coincidentally, at the start of the play a young Mormon missionary named Elder Thomas (Ethan Dubin) happens to ring his doorbell when Charlie is in a medical crisis. He too becomes a part of his world in what turns out to be the last week of Charlie’s life.

Charlie weighs about 600 pounds. That is not what the play is about, but that is an important fact to the people who meet and deal with Charlie, the other characters and the audience. Weight, like race, cannot be concealed or denied, like sexuality or religion or other things that can generate anger and hatred. Charlie is not a number, he is all the things described above. And this play is not about his weight but about his relationships, especially his relationship with his daughter, which he is desperate to reestablish before he dies. Whether or not his weight is directly responsible for his terminal condition is not really addressed. Everyone dies. Thin people die and fat people die. He is simply a dying man trying to make things right in his last days.

Charlie is a really likeable guy, but when the lights come up on a 600 pound man essentially living on his sofa in the midst of his filthy apartment (a meticulous and nerve-wracking design by Juliana von Haubrich), certain preconceptions set in. That playwright Samuel D. Hunter was able to write a play about a man of this size avoiding the majority of the stereotypes people hold, and portraying him as a smart, caring man who earns his own living and by and large takes care of himself, is to be applauded. According to this piece, The Whale was not intended to be a play about a fat man, but sprang from Hunter’s own experience teaching expoistory writing to first-year students at Rutgers University. http://www.playwrightshorizons.org/shows/trailers/samuel-d-hunter-whale/

Carter is not a fat man. (Why almost all fat roles on stage and screen are played by thin or average size actors in fat suitsî is a discussion for another day.) For this role he wears a fat suit that weighs about 50 pounds. The suit does a lot of the work for Carter, slowing him down and restricting his movement. It is also extremely hot, which is why the Charles R. Wood Theater is air conditioned to Polar Vortex temperatures – bring a sweater! People have compared this role to those in Samuel Beckett’s plays where actors are buried up to their necks or trapped in garbage cans, reduced to using just their face and voice with which to convey character and emotion, but that is the result of the fat body here being fake. A real body, of any size, is never immobile. A fat body wiggles and jiggles and flops and flaps in ways this 50 pound lump of foam cannot. Carter is trapped in a costume, not a body.

But as I said, Charlie is not just a body. Carter ‘s job is to portray Charlie’s self, his soul, and he does so masterfully. He anchors the play, literally and figuratively, as the world, which knows not what to make of a fat person, swirls around him.

What makes The Whale such a fine and intriguing play is that Hunter and director Kristen van Ginhoven make each character important and interesting. What binds them together are their individual relationships with Charlie, but each has his or her own struggles and addiction. Hogg is truly reprehensible as Ellie, the kind of teen we all despair will never morph into a reasonable adult. Gurule exposes Mary’s deep sense of shame that she has failed as a woman, a wife, and a mother. Rabine embodies the pain Liz feels as she watches yet another man she loves slowly allow death to overtake him without putting up a fight.

There is also a mystery to be unraveled here. At first it seems as if the question is what did Alan hear/experience at church that literally broke his spirit, but ultimately it is Elder Thomas, the outsider, who has a skeleton in his closet. The catharsis comes when he is outed online by Ellie. I wished Dubin and van Ginhoven had built some suspense into the character, who seems less fidgety and paranoid than someone living a lie that big would be.

Is there a whale in this play? One might think that it is Charlie, but that concept does a disservice both to Charlie and to whales. Charlie cherishes an essay on Melville’s Moby Dick written by his daughter when she was in the eighth grade (see the quotation at the start of this review), so that is one whale of importance here. The other is the Biblical whale who swallowed Jonah because he disobeyed God’s will. For me, the most heartbreaking line in the play is when Elder Thomas tells how Jonah prays to God and the whale spits him out, whole. That is exactly what every fat person dreams of, to be disgorged from this body that people shame and hate, to land safe and whole on dry land, visible finally as their own authentic self. But there is no prayer which will free Charlie from the whale of grief and shame that has swallowed him.

That is not the point Hunter is making with the Jonah story, which Elder Thomas tells to explain why Alan starved himself to death (statistically humans are more likely to die from being too thin than from being too fat) because like Ishmael and Queequeg, he heard a sermon on the story of Jonah, and that made him realize that he had disobeyed God’s will by taking up a homosexual relationship with Charlie. This is a theme that Hunter also writes about in A Great Wilderness, (Review his new play currently in production at the Williamstown Theatre Festival, in which a different religion teaches that homosexuality, particularly male homosexuality, is such a grievous sin that God sees the sinner as better off dead. Hunter a gay man who attended a Fundamentalist Christian school and this experience clearly haunts his own psyche to this day because in reality far more people, particularly in the medical profession, see fat people as the group who would be better off dead.

Which leads us to the only great fallacy in Hunter’s script, that there is medical help available to Charlie. If he would just get health insurance – very few insurance companies would issue a policy on a 600 pound man and if they did it would NOT be cheap – go to the hospital in rural Idaho there would not be an ambulance or a hospital equipped to transport or treat a person of that size; or have gastric bypass – very, very few hospitals would agree to perform ANY kind of surgery on someone over 350 pounds. Charlie is absolutely correct not to waste his hard-earned money on an insurance policy that will buy him no care and to refuse to humiliate himself by allowing his friends and family to call 911.

The Whale is not an easy play, but it is both riveting and satisfying and this is a fine production. There are adult themes and language in the play. Like many of her generation, Ellie swears up a storm ñ but those are hardly the issues that are going to raise emotions and provoke discussion here. People are literally afraid to look at, let alone listen to and engage with, very fat people. Don’t let that prevent you from entering the world of Charlie and his friends and family for a few hours. You will be glad you did.