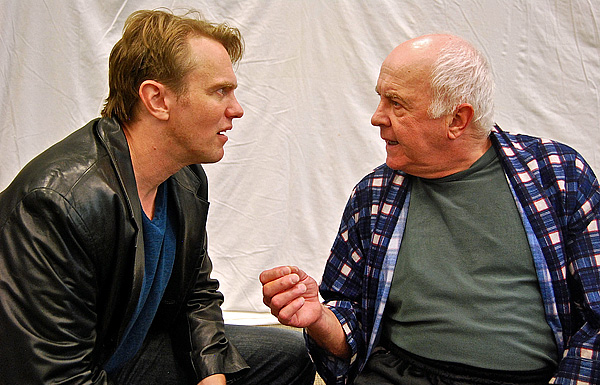 It’s a standoff between father and son. Or sons. Or rather, clones of one son. The unstoppably inventive Caryl Churchill’s play about modern man is sure to spin a few heads as the Chester Theatre Company continues its 25th Anniversary Season with Caryl Churchill’s A Number. The players feature CTC favorite Jay Stratton, joined by newcomer Larry John Meyers.

In A Number, Bernard has made a shocking discovery: he is one of “a number” of clones that were created from the cells of an older brother he never knew he had. A Number opens as Bernard seeks an explanation from his widowed father, Salter. But, in succeeding scenes so do two other “sons.” Who is the original? Who are the clones? Why did the father have the clones made? A Number is a fast-paced psychological thriller, a fascinating puzzle and a dark tale of a father’s love for his son, from one of the great playwrights of our time.

The London Evening Standard, in honoring A Number with its Best Play Award, hailed it as “An astonishing event…the first true play of the 21st century.” The New York Times called it “Stunning…. a great event…a gripping dramatic consideration of what happens to identity in a world where people can be cloned.” A Multi-Obie Award Winner, Caryl Churchill’s other plays include Cloud Nine, Top Girls, Fen, Serious Money, and Mad Forest. Her latest play, Love and Information is currently an Off-Broadway hit.

According to CTC Artistic Director Byam Stevens, “Just as you might expect with a writer as original and groundbreaking as Caryl Churchill, A Number is a hard play to categorize – it’s a dark comedy, a psychological thriller and an exploration of pressing ethical questions on the cutting edge of medical technology. Funny and provocative, and thought-provoking — the inimitable hallmarks of one of the pre-eminent playwrights of our time!”

Jay Stratton returns for his sixth appearance at CTC, (Pride@Prejudice, The Dishwashers, Grace, Running, Two Rooms) to play Salter’s sons. Salter will be played by CTC newcomer Larry John Meyers, who collaborated previously with Stratton on a production of Othello in his native Pittsburgh. CTC Artistic Director Byam Stevens will direct.

“A Number” strikes sharp and reverberant chords of implications about the ways people rationalize bad behavior and unthinkingly objectify others, including their own flesh and blood. – Ben Brantley, NY Times

Caryl Churchill (Playwright) is an incredibly prolific and award-winning playwright whose work frequently deals with feminist issues, the abuses of power, and sexual politics. Her many plays include: Mad Forest, Love and Information, Downstairs, Having a Wonderful Time, Easy Death, Owners, Objections to Sex and Violence, Softcops, Serious Money and Icecream. Churchill was educated at Oxford and has served as resident dramatist at London’s Royal Court Theatre.

Byam Stevens (Director) has been the Artistic Director of CTC since 1998. His Off Broadway credits include: Tea for Three: Lady Bird, Pat and Betty, The Dishwashers; The Bully Pulpit, starring Michael O. Smith as Teddy Roosevelt; the World Premiere of Carbondale Dreams by Steven Sater and the American Premiere of Beef by David Pownall. For CTC, he’s directed the World Premieres of: Arms On Fire, The Darlings, Home Fires Burning, The Plains of Ilion, and John and Teddy. Other productions for CTC: Wittenberg, Last Train to Nibroc, Two Rooms, An Almost Holy Picture, Valley Song, The Interrogation of Nathan Hale, and the American Premiere of Sixteen Words For Water.

Jay Stratton (Salter’s sons) is making his sixth appearance at CTC. Previously at Chester, Jay has appeared in The Dishwashers, Pride@Prejudice, Two Rooms, Grace,and Running. Jay was also the director of See Rock City in Chester’s acclaimed Nibroc Trilogy. A New York-based actor, Jay has worked in television and film, Off-Broadway, and at regional theatres around the country. In New York, Jay has worked with theatres like Peccadillo, 59E59, The Pearl, and Red Bull. Recent regional projects include: Venus and Fur and Bug at Rep Theatre of St. Louis; The Pavilion and Reckless at Cincinnati Playhouse in the Park; Oedipus at the Pittsburgh Public; Pride and Prejudice with the Denver Center; Stones in His Pockets at Hudson Stage Company; Philadelphia Story and Rosencrantz and Guildenstern are Dead at Pioneer Theatre Company; and Caesar and Cleopatra at Playmakers Rep. Jay is a professor of Acting and Voice at Nassau College on Long Island.

When, where, ticket information

Playing from July 30 through August 10 at the Chester, MA Town Hall. Tickets are available on CTC’s website: www.chestertheatre.org, or by phone at 1­.800­.595­.4TIX. To receive a brochure, contact the CTC office at 413­.354­.7770. CTC performances take place at Chester’s Historic Town Hall, 15 Middlefield Road, Chester, MA. Performances are Wednesday through Saturday at 8:00pm, with matinees Thursdays and Sundays at 2:00pm. Tickets are $30 for weekday performances (Wed­Fri), $35 for weekend (Sat & Sun). Student, Chester Resident, and Saturday Night Rush tickets available; group rates for 10 or more are also available. For further information visit CTC’s website at: www.chestertheatre.org.

Chester Theatre Company, a professional theatre company located in the foothills of the Berkshires, produces 4 plays each summer, performed by top­flight actors, directors and designers from across the country. Under the leadership of Artistic Director Byam Stevens, CTC has earned a reputation for producing the best in contemporary theatre – 17 CTC productions have gone on to Off-Broadway, regional, national, and international engagements in the last 17 years.