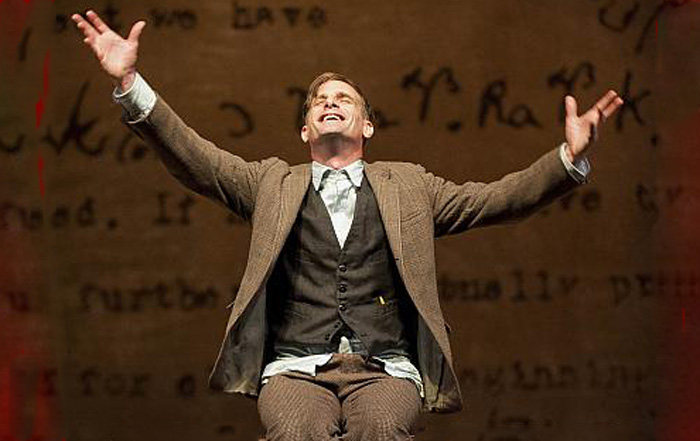 Mark H, Dold and the Cast of Breaking the Code.

Breaking the Code shows that all is not fair in love and war
Theatre Review by Gail M. Burns and Larry Murray

Gail M. Burns: If we had awards for theatrical achievement here in the Berkshires, I would immediately hand over the Best Actor in a Play award to Mark H. Dold for his tour de force portrayal of the complex and brilliant Alan Turing (1912-1954) in Breaking The Code. I understand that this was a role of great importance to him personally, and his dedication, commitment and hard work are evident.

Larry Murray: Yes, Dold is a major reason to see Hugh Whitemore’s play, it is a work that demands much from the person playing Alan Turing. In a pre-show interview, Dold summed up Turing this way: “He didn’t quite trust the human mind, it could be prone to make mistakes. He felt the only way to counter human error was to create a machine, a computer.”

And the play is designed as a bit of a puzzle starting in the middle, going back and forth in time and ending at the beginning, with his first true love.

Gail: Turing might admire the semi-cryptic style in which Whitemore has chosen to tell his life story.

Larry: Most people don’t know much about Turing, but he figured out how to break the Nazi enigma code, and went on to develop the first computers and artificial intelligence, But tragedy was to be his lot, not because he was gay, but because he was honest about his homosexuality in England in the 1950’s when it was not only against the law, but terribly misunderstood, and considered a terrible security risk.

Gail: Early in the 1950’s a group of Soviet spies recruited from amongst Cambridge University undergraduates, some of whom were gay, had heightened public anxiety that the homosexual community were involved in espionage. After all, if people were deviant in one aspect of their lives wouldn’t they be easily persuaded to do so in other ways?

Larry: As we watch the play unfold, we see how the tendency of people to call Turing under-appreciated in his own time is just a euphemism for being bullied to death. In the world of Turing portrayed on stage, he stuttered badly when talking to normal people who had no interest or idea about the work he was doing at Bletchley Park during the war, nor how they and the British police system made his late life a total misery. But his problems may have been caused as much by his being a total geek – and totally honest – in a world that sought the mediocrity of social conformity and constantly told little white lies to keep up the pretenses of the times. Turing’s stammer and geekish manner so perfectly portrayed by Dold would certainly still be enough today to be an outcast in most high schools. Turing had a scientific brain and most people have no idea of how it works, they just think it is not normal. A scientist welcomes surprises, and explores the reasons behind them. Science does not condemn, it simply observes and reports.

One of the interesting points the playwright makes is that in the 1950’s gay men would have a fling whilst in University, and then upon graduating, find a suitable female “companion” and then later settle down in order to give the appearance of leading a normal life. In the legendary PBS series Brideshead Revisited, this is exactly what happens. Turing played a bit at this but found it dishonest. And in the past decade we have witnessed a stunning number of closeted gay Republican politicians who have publicly condemned the gay lifestyle who were caught in flagrante delicti with another man despite the fact they were married. The hypocrisy is stunning of course, but it is the religious and political harrassment of gays that is the root cause of such artificial marriages and clandestine behavior.

Gail: Turing had great surety in his own genius, which director Joe Calarco highlighted brilliantly by having the transparent panels filled with mathematical theories and equations that bracketed the stage and flew over Turnig’s head light up when he spoke of his work – his passion. Except for one scene very late in the play, the only passion we see Turing express is mathematical, not sexual.

Larry: Great point, Gail. Most people spend an inordinate amount of time on their careers over a lifetime, and sex of any description rarely claims more than a small portion of it.

On stage we meet an octet of other people important to his life: his mother, Sara (Deborah Hedwall); his best friend and schoolboy crush Christopher Morcom (Mike Donovan, who also plays Nikos, a young Greek man with whom Turing has an fling while on vacation in Corfu); Detective Sergeant Mick Ross (Kyle Fabel); Ron Miller (Jefferson Farber), the young man whose affair with Turing leads to his arrest and convinction on charges of gross indecency; Dillwyn Dilly Knox (Philip Kerr), the leader of the codebreaking team at Bletchley Park; Patricia Pat Green (Annie Meisels), a Bletchley colleague to whom Turing almost becomes engaged; and a mysterious government agent who claims he is really named John Smith (John Leonard Thompson.)

Gail: Whitemore uses real names in all cases, except for Pat Green – based on Joan Clarke (1917-1996) – and Ron Miller – based on Arnold Murray.

Calarco keeps the whole cast on stage most of the time. They sit in straight-backed wooden chairs lining the sides of the raked platform where the action takes place. They do not speak, but they communicate volumes as they move about, sometimes watching Turing closely, sometimes turning away deliberately but still listening, sometimes grouping together, sometimes even reaching out to silently hand him props at crucial moments. When they all leave at the end of Act I, it is symbolic of Turing’s sense of abandonment.

Larry: The staging of the Whitemore script must not have been easy for Joe Calarco since trying to make a complicated story unfold coherently is a challenge with these puzzle plays.

Gail: This staging is entirely Calarco’s device – it is not indicated in Whitemore’s script, which is nearly devoid of specific stage directions – and as a result it gives added weight to certain characters and relationships, ones which the script does not entirely support.

Larry: I particularly liked Deborah Hedwall’s portrayal of Turing’s mother Sara, and her patience with her gifted son whom she simply seemed incapable of understanding. Her confusion and love for him existed in the same space, a remarkable mix for an actor, and her simple story of driving away and leaving him at his first boarding school provided one of the highlights of the show. As his two loves, Christopher and Nikos, Mike Donovan was discreet and not just a little mysterious. It would have been nice to have heard more about this part of his background, though we did get to see some artfully composed nudity.

Gail: Nikos and John Smith were the two wholly fictional characters in this play, there to serve as symbols rather than people. Christopher Morcom is a character emphasized heavily by Calarco’s staging, and rightly so if you look closely at Turing’s personal writings. Morcom was indeed his first love and his untimely death left Turing bereft and doubly dedicated to implementing and proving the mathematical and scientific ideas which he and Morcom had worked on. But Whitemore’s script is not as focused on the relationship as Calarco is, hence the disconnect for those of us less well versed in the details of Turing’s life.

Larry: I was sold on this show from the moment we entered the theatre and saw the zen blackness of the stage, a single apple on a table center stage. Turing would eat one apple every night before retiring, it was one of his rituals. When the play begins, we get a peek into his mind, as scenic designer Brian Prather lights up acrylic panels with mathematical formulas and writings from theoretical physics that seek to define intelligence, reason and rationality in black and white terms.

The soundscapes created by Lindsay Jones gave the first act a subtle undertone which changed as the relationships changed. Almost subliminal, there were deep tones when Turing worked on his projects, as if to signal his deep interest in the problems being solved, while his painful interactions with police inspectors and supervisors raised the tones to higher, more neurotic levels where we could actually feel his stress as he underwent his grilling and attempts to fit in.

[Turing’s] last postcards, in March 1954 referred mysteriously to electrons not allowed to associate too freely; another maths-camp joke, given meaning by the dark rider, that it was laid down for the good of the electrons themselves. – Andrew Hodges

Gail: Whitemore has Turing spout a great deal of complex mathematical/scientific explanation which left my unmathematical brain in a whirl. I am sure these passages came directly from Turnig’s own writings, and Whitemore was able to bring them full circle into meaningful points in Turing’s story. I was often bemused, but never bored.

Larry: For those who were born in recent decades, this play provides an insight into how things were back in the days following WWII. Public hatred was shifted from the Nazis, the “japs” (as they were referred to in WWII days) and the axis countries to new targets. Government needed to have enemies to fight to justify a large peacetime Defense budget. Between godless communism and the supposed threat of homosexuals within government agencies supposedly doing the spying, purges and witch hunts were the order of the day. Senator Joseph McCarthy held sway in the 1950’s, waving fake lists of supposed spies, bullying and badgering Americans about who they knew that was gay, or a member of the communist party (which was quite popular during the depression when there were few jobs), or just didn’t fit in. Intellectuals were suspect, as were artists, writers and anyone the John Birch Society deemed suspicious.

Gail: Are things so different today when the government exhorts citizens if you see something, say something? When people feel they have the right to tell food stamp recipients what they can and cannot buy at the supermarket and parents are arrested for allowing their children to play unsupervised at the playground? We are still actively seeking, and publicly punishing, enemies everyday.

Larry: Wrapped up in this one play is a swath of history, a wealth of information about the birth of computers, and some of the most unforgettable characters you are likely to meet. And if you have never heard about Alan Turing before, or the love that dare not speak its name, perhaps you owe it to yourself to see this brilliant production of an important play that reminds us how we sometimes let the irrational destroy those who have advanced civilization the most.

Gail: Sir Derek Jacobi played Turing in the original London and New York productions of this play in the late 1980’s, and in the film based on it, so any actor bold enough to tackle this role will find himself compared to one of the greatest actors of our time. After seeing Dold I took a peek at the film and found Jacobi wanting. What more can I say?