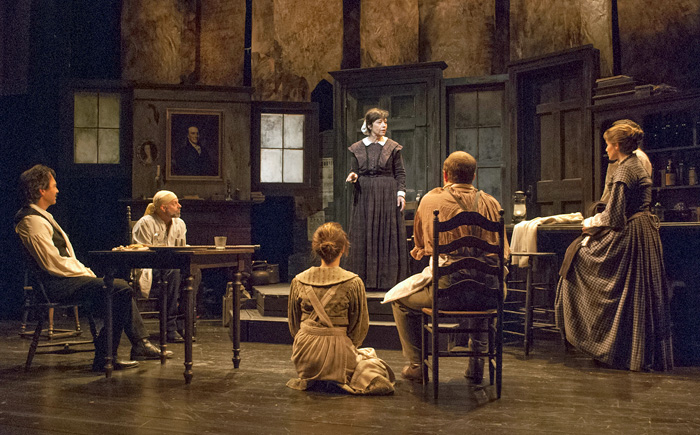 David Adkins brings Poe back to life on the Unicorn Stage
Theatre Review by Gail M. Burns and Larry Murray

Larry Murray: We’re just weeks away from Halloween and as if to set the mood for an evening with Poe we had a wonderfully spooky ride through darkness, rain, and fog as we made our way to the Unicorn Theatre in Stockbridge. Poe is a new work, getting its world premiere by the Berkshire Theatre Group.

With all the movies featuring grunting zombies, slashers and hauntings constantly being offered to us via Netflix and the local multiplex, one might wonder whether the world has forgotten one of the pioneers of horror, Edgar Allan Poe (1809-1849). All you need to do is listen to Kate Maguire recite “The Tell Tale Heart” in this play to remember how penetrating true horror can be. She’s doing exactly that in the photo above, with David Adkins (far left), as Poe, listening raptly.

Gail M. Burns: Even though I am not a fan of Poe, or of the horror genre in general, I recognize him as an extraordinary writer – one of the first Americans ever to attempt to earn his living solely by his pen. If he had been a sober and careful steward of his finances, that plan might have worked out better than it did…

Larry: We can trace the history of horror writers back to ancient Mesopotamia where they had their own ideas about vampires. But in this country, it was early American writers such as Washington Irving (The Legend of Sleepy Hollow) and more recent ones like H.P. Lovecraft’s Mythos stories that are our own masters of the macabre. And love him or hate him, there is always Stephen King. So it is with a great deal of curiosity that I approached this new “show and tell” play by Eric Hill. What a great way to remind us all of the master of suspense who scared the hell out of Americans in the early 1800’s and continues to do so even today.

Gail: Sadly, I found this play far more of a “Tell” than a “Show” and that is always problematic in the theatre. BTG is clearly aiming for the educational theatre market and may already have school groups booked. These days theatre companies need to meet mandated core curriculum standards so that schools can obtain funding to attend performances, and this may explain the overload of factual detail here.

Larry: You are right, there was an awful lot of exposition about Poe’s drinking and financial problems and the relationships of the various tavern employees. Sort of a shame, too, since a few more excerpts of Poe’s writing would have added far more dramatic energy to a rather tiresome study of the lives of the people around him in Gunners’ Hall Tavern. Hill might have given us far more “zest,” especially since none of us are preparing to take a standardized test anytime soon.

Gail: For all the facts about Poe’s life that are crammed in, the peripheral characters, about whom we are supposed to care, are nothing but a bundle of anachronisms who speak a cheerfully modern American vernacular in modern American accents. Hill gamely tried to give them some back-story to link them to Poe – the young barkeep, Connor (J. Andrew Young) is the son of an old drinking buddy of Poe’s, and the young barmaid Maggie (Madeline Calandrillo) is an ardent fan of Poe’s writing – but Hill’s direction is as wooden as his writing and this young pair never came alive to me.

By a huge leap of the imagination the Irish cook, Mrs. O’Donnell (Kate Maguire), could recite “The Tell Tale Heart.” So, of course, she did. Maguire told the tale with clarity and drama, while the entire rest of the cast – including a couple of non-speaking extras brought on just for the occasion – sat and listened intently, an audience within an audience, if you will.

Larry: David Adkins did an incredible job transforming himself into Edgar Allan Poe. His characterization was solidly built, even though part of his portrayal required him to often be quite unsteady on his feet. I think Hill captured the wiles of the drunk trying to con one more drink from the barkeep so well I think he must have snuck into AA meetings to hear the stories of how it is done. And as Adkins extemporized to whoever would listen, he would loudly whack the nearest bar or tabletop with his hand, his cane, or his glass to make sure everyone remained awake, not matter how boring he might have become as he drank.

Gail: I always enjoy seeing Adkins on stage, and am constantly impressed by his chameleon-like ability to transform his physical appearance. David Adkins doesn’t actually look anything like Edgar Allan Poe, but here he WAS Poe.

Larry: The set was nicely pulled together by Carl Sprague, filling the Unicorn space where its floor to ceiling sweep worked quite nicely to embrace the audience. The lighting with its excessive spillover, however, was another matter.

Gail: The third of the audience in which we were seated had not one but two intensely bright white lights shining in our eyes. It appeared as if a hole had actually been cut into Sprague’s fine set to accommodate the lower one. Lighting designer Matthew Adelson is a pro, and I am mystified by this sudden lapse. The costumes, by David Munn, represented a hodgepodge of periods, with some obviously cadged from the Christmas Carol wardrobe.

Larry: There are many who can never get tired of Edgar Allan Poe, and this is a show with both rich detail and questionable speculation about his life.

The Poe Museum writes that “days after Poe’s death, his literary rival Rufus Griswold wrote a libelous obituary of the author in a misguided attempt at revenge for some of the offensive things Poe had said and written about him. Griswold followed the obituary with a memoir in which he portrayed Poe as a drunken, womanizing madman with no morals and no friends.”

Poe’s mysterious demise is recreated – inaccurately – on stage in Poe. He was actually taken from a barroom in Baltimore to the Washington Medical College. There he died on Sunday, October 7, 1849, at 5:00 in the morning. Poe was never coherent long enough to explain how he came to be in his dire condition, and, oddly, was wearing clothes that were not his own.

In the decades that followed, every scrap of paper that Poe ever wrote, every person who knew or worked with him was questioned and to this day the accumulated mass of contradictory tales and facts leaves the scholar no choice but to pick and choose among this jumble for the real Poe. Even more oddly, his death certificate and all records of his hospitalization disappeared long ago as well. The biggest mystery of Poe’s life is his demise, much of which was left unexplored in this story.

Even more fascinating is that is appears that Poe himself made sure nobody ever knew who he really was deep inside.

Gail: Which makes you wonder, whichever set of “facts” about Poe’s life you subscribe to, just how close to the truth they really are.