At The Mount: “The Long Run” and “The Rembrandt” a seasonal treat from The Wharton Salon 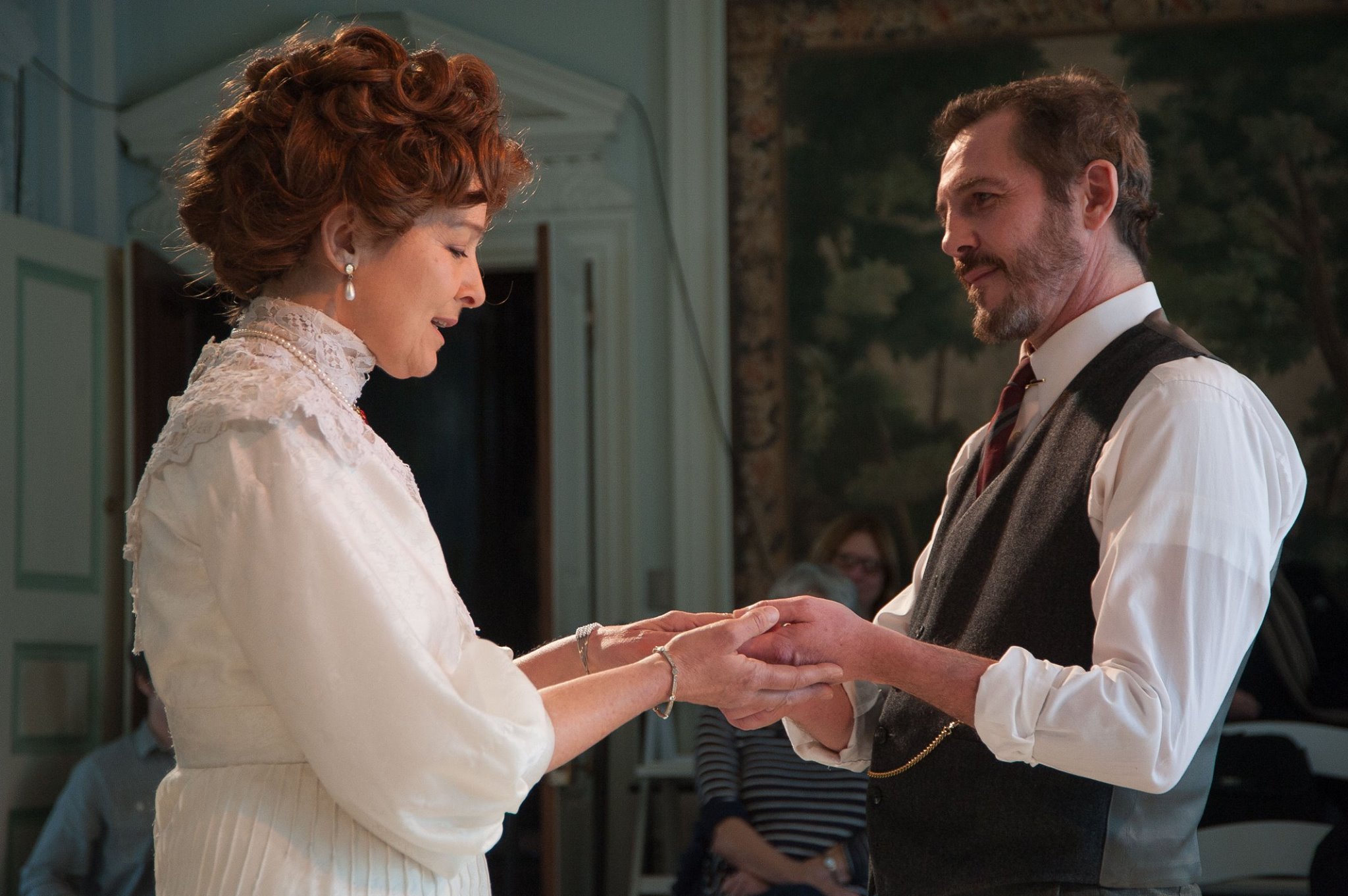 At The Mount: “The Long Run” and “The Rembrandt” a seasonal treat from The Wharton Salon

I had my worries when the Wharton Salon announced that they would be staging their annual production on Thanksgiving Week in November instead of their customary mid-August slot, and indeed 8-12 inches of snow fell on what was to be the first night of run. But in July the newly formed Pythagoras Theatre Works brought a double-header of one-acts by Wharton and Chekhov to the Berkshires (See Review) , and by presenting in November The Wharton Salon was able to perform in, well, the Wharton salon inside The Mount, which allowed for a glorious ride down the long driveway through the beautiful old growth forest surrounding the mansion in snow-frosted darkness, a special seasonal treat before the show even began.

Another bonus was the teaming of the Wharton Salon, who presented an adaptation of Wharton’s short story The Long Run, and Pythagoras, who reprised the Wharton half of their summer offering, The Rembrandt. Two companies, two directors, and double the Wharton in an evocative setting resulted in a win/win situation for are audiences.

And people came. Anyone who says that there is neither theatre nor the audience for the same in the Berkshires after Columbus day has been proved wrong twice this month by the sold-out WAM Theatre production of In Darfur and now this delightful double-header at The Mount.

The two plays complimented each other well. The Long Run is an emotional tear-jerker about love lost through one man’s inability to risk stepping outside the rigid bounds of society, and The Rembrandt is a light-hearted look at the quagmire a curator at the Metropolitan Museum of Art finds himself in when he is unable to tell a destitute widow the truth about her “valuable” painting. In both cases Wharton, her adapters – John Hadden for The Wharton Salon with The Long Run and Michael Burnet for Pythagoras with The Rembrandt – and the able casts tug hard at our heartstrings, building to the requiste and satisfying sad and happy endings.

Another big bonus to performing in the off-season is that there are lots of fabulous local actors available and glad to be able to work close to home over the holiday weekend. The Long Run stars Jason Asprey as the emotionally constipated Mr. Merrick, Corinna May as the object of his strangulated affection, Penelope Trent Reardon, Scot Vighi has her self-satisfied second husband Mr. Reardon, and Hadden as the sympathetic Mr. Ames to whom Merrick unburdens himself. Andrew Borthwick-Leslie directed.

For many of these folks, performing in the salon at The Mount is a real homecoming. I and many others in the audience could recall seeing Prusha, May, Asprey, and Biggs, in Dennis Krausnick’s Wharton adaptations for Shakespeare & Company during the many years they were in residence there.

The seating is divided in half, with the two chunks of chairs facing each other and the performance area in the center. This is exactly the way ShakesCo used to stage their shows in this space, and very similar, although smaller, than the set-up Pythagoras used in the historic 1854 West Stockbridge Town Hall. Once you get used to watching half of the audience along with the show, (and adjust to the knowledge that they are likewise watching you), the intimate space works well and you are drawn neatly in to Wharton’s world. In fact, whenever a character would stand and look out the French doors onto the terrace I wondered how often Wharton herself might have stood and gazed at the same snow covered scene.

The three leading ladies are fascinating, luminous, and each perfect for the character she portrays. May is ageless and compelling, her Penelope capable of making men desire her with the merest glance. Greenland is a breath of spring with flashing brown-eyes and an appealing confidence. And Prusha’s smile could indeed convince a man to spend $1,000 ($30,000 in today’s money) on a worthless piece of art simply to please her.

Asprey is all angst and immobility against May’s promise of passion. Merrick and Penelope’s romance is perfectly summed up in Sondheim’s lyrics from “Send in the Clowns”: “One who keeps tearing around, one who can’t move.”

Vighi does a nice job with his small role, but Hadden, in both his writing and his performance, failed to present me with a complete picture of Mr. Ames. Was he merely the framing device, the excuse for Merrick to tell the tale? Or was he too hopelessly in love with Penelope? As it his Hadden’s Ames is mostly a listening ear, and believably active listening on stage is no easy task, particularly when you wrote the script!

My only minor quibble with The Long Run was that once Asprey got wound up in the emotional parts of Merrick’s story, he failed to modulate his voice for the intimate surroundings. You need a powerful set of lungs to project on the average stage, but when you are mere feet away from your audience normal stage speech can be just too loud.

Another Pythagoras hold-over from the summer is composer and cellist Jonah V. Thomas, who has created additional musical for The Long Run. The solo cello music is performed live and it adds so much to the proceedings. Would that all productions had access too, and could afford, such an evocative underscoring.

Kathleen Doyle designed that suit for Renzoni in The Rembrandt, along with the conventional brown one Biggs wears which reveals a stunning teal green silk lining from time to time. Her dress for Greenland is very becoming, but Prusha’s skirt is awkwardly voluminous and badly matched with a kitschy little crocheted shawl that is equally unbecoming. Govane Lohbauer did the costumes for The Long Run which consist of three drably conventional turn of the 20th century suits for the gentlemen, and two gorgeous dresses and wigs for May. The white dress, in which she spends most of the play, is spectacular in its simplicity, and versatile as the removal of a few small bits turn it from a most proper Edwardian gown to the sensuous suggestion of a glowing post-coital state of undress, and back, with grace and ease.

Sadly, by the time you read this the run will have ended. Winter Storm Cato prevented this review from getting written in time to give you a chance to catch this delightful double-header, but hopefully both the Wharton Salon and Pythagoras will be back next year and I encourage you to watch for their productions. They are most welcome in any season.

The Wharton Salon and Pythagoras Theatre Works in partnership with The Mount presented The Long Run and The Rembrandt, November 26-30, 2014, at The Mount, 2 Plunkett St, Lenox, MA 01240.

Link to The Long Run by Edith Wharton
http://www.gutenberg.org/ebooks/24133

Link to The Rembrandt by Edith Wharton
http://www.readbookonline.net/readOnLine/3273/