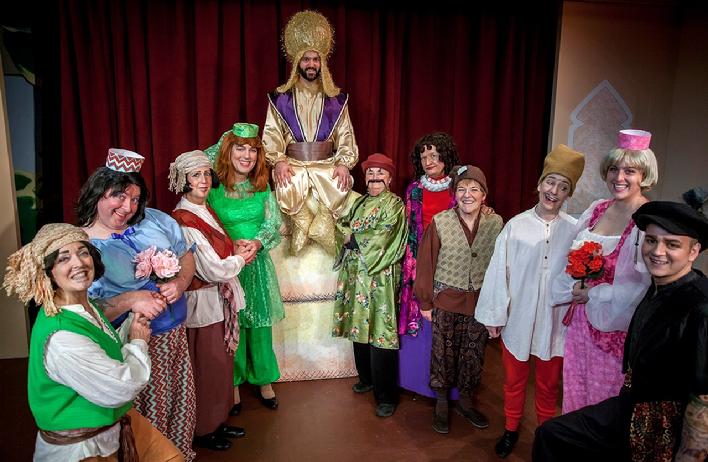 In these days when wages are stagnant, money is tight, and the rabid consumerism of the late 20th century as lost all its luster, we are being encouraged to spend what disposable income we have on experiences, rather than objects. At the Ghent Playhouse a $20 investment buys you one of the best holiday experiences available – a ticket to the Panto! And this year’s offering – Ali Baba and the Four Tea Thieves – is a gift that will keep on giving as you fondly recall the groaningly bad, er, good jokes, the hilarious costumes, and the wonderful songs.

What is a Panto? Well, it is a British theatrical tradition for the holiday season. Basically you take a familiar fairy tale or folk tale, have all the men play the women and the women play the men, add lots of new and (hopefully) witty lyrics to well-known tunes, and ignore the plot completely. There is lots of audience interaction – you get to boo the villians and sing along a bit and shout “He’s right behind you!” and such – and there’s a healthy mixture of topical humor on current events along with good old fashioned schtick. Only the most conservative and humorless of folks can fail to be amused by the goings-on.

In Columbia County this tradition was started in 2000 by British-born Judy Staber, who gathers a corps of like-minded Loons to pen a new and original Panto every year. The fun begins when the title is announced around Labor Day – Menagerie a Trois (a combination of The Three Bears and The Three Little Pigs), Robin Hood – Fifty Shades of Green, SleepFrog (The Frog Prince and Sleeping Beauty), and this year Ali Baba and the Four Tea Thieves. Each title evokes enticing images of the various Loons in the clever and comical costumes Joanne Maurer will undoubtedly design, and tickets are purchased and calendars marked for one of the three weekends after Thanksgiving.

The plot, and there is one, centers on a tea shop, The Tea and Crumpet, in the mythical town of Feng Shui in the equally mythical country of Ollie-N-Stan, run by Ali Baba (Sally McCarthy), his bossy brother Louie Baba (Cathy Lee Visscher), and Louie’s Irish wife Baba O’Rhum (Paul Murphy), along with their employees, the sexy waitress, Chai Chai (Nellie Rustick), and the voluptuous pastry chef, Baba Ganoush (Mark “Monk” Schane-Lydon). Ali Baba and Baba Ganoush are madly in love, but Chai Chai is single and enjoying the flirtatious attentions of Louie – much to Baba O’Rhum’s displeasure – and The Wazir (Matthew Coviello).

Do I need to mention that one of the songs is a take-off on The Beach Boys “Barbara Ann”? Sing it with me now: Bababa Baba O’Rhum…

But alas, a terrible tea shortage has gripped Ollie-N-Stan! The evil Ma Sencha (director and co-author Tom Detwiler) and her Tea Baggers – Orange Pekoe (Johnna Murray), Oolong (newcomer Sam Reilly), and JeeDarling (costume designer Joanne Maurer) – are stealing all the tea before it can get to the city. They plan to sell high (Get it? High tea?) and make a killing. But they prove no match for the Baba brothers and the town’s tea merchant, Lapsang Souchong (co-author Judy Staber). One by one the Tea Baggers are captured, but not before Oolong, whose real name is In Ah Wei Wei, eats one of Baba Ganoush’s aphrodisiac Yazdi buns and falls madly in love with Chai Chai. (Hence the moving duet “I Like Your Buns” sung to the tune of “I Hear Music and There’s No One There.”)

Scheherazade (musical director Paul Leyden) laments that her forty thieves have been reduced to four while she wrestles with an aggressive wig and provides the piano accompaniment. In the end the bad guys get what’s coming to them and the double wedding of Ali Baba and Baba Ganoush, and Chai Chai and Oolong aka In Ah Wei Wei provides a blissfully happy ending. (Quick, what is Baba Ganoush’s name once she marries Ali Baba? That’s right, Baba Baba.)

The recent new additions to the Loons contingent are proving to be real vocal powerhouses. Rustick and Reilly make dynamite juvenile leads who sing up a storm, while Rustick teams with McCarthy and Lee-Visscher for some great close harmony. The Forty Tea Thieves also form a fine vocal quartet. And I am glad someone listened to me last year and gave McCarthy several opportunities to belt. The lady has pipes, and I never tired of hearing her play them.

Everyone except Rustick and Reilly are cross-dressed, of course, and Maurer has really outdone herself with the costumes. They are colorful (Pekoe wears orange, of course, and the Irish Baba O’Rhum sports a Kelly Green harem costume), and clever (the Teabaggers hats, all different, each resemble a tea bag, complete with hang tag), but the piece de resistance is the bubble-butt she has created for Baba Ganoush. Kim Kardashian may have broken the Internet with her posterior, but Shane-Lydon breaks several laws, national and international with his, which he knows how to work and twerk during several memorable exits.

The Panto world rejoices in the return of Murray and Coviello to Loon Land, but all are in a veritable tizzy over the announcement by Staber that this will her last Panto on AND off the stage!! Say it isn’t so! Staber decided to resurrect the British Panto tradition here in the Colonies at the Spencertown Academy, where she was then the Executive Director, and for the past 15 years, in Spencertown and now in Ghent, she has led the creative mayhem as the author or co-author of every Panto, as well as making many memorable stage appearances as Friar Tuck, Papa Bear, a variety of white-sneakered fairies, and now Lapsang Souchong. While I know there is an abundance of talent amongst the remaining Loons, I truly cannot imagine a Staber-less show.

Bill Camp has once again designed the sets and lights, and they are spiffy, especially the secret cave that opens when you sing…well, I won’t give away all the surprises.

Somehow, my nephew had managed to get to age 19 without ever seeing a Panto, so we remedied that this year. I asked him for his review and he summed it up thusly: “Fun for the whole family and different in a good way. You are allowed to interact with actors without getting yelled at. I would definitely go again.” And there you have it, from a Panto Virgin.

Before I wrap up this year’s Panto review, I must call your attention to the always hilarious stage names the cast lists in the program. Some folks retain the same monikers year after year, and others enjoy making up new ones to suit the theme of the play. I have reproduced them carefully below, and I suggest you read them out loud for maximum hilarity. Why should the fun stop when you leave the the theatre?