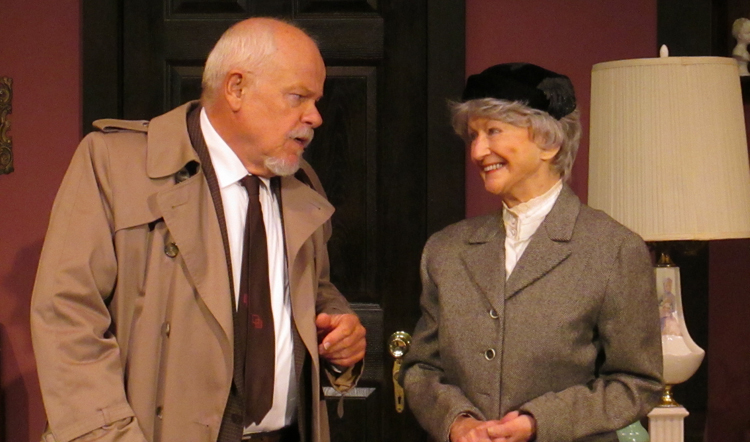 The annual murder mystery – almost always an Agatha Christie – does so well for The Theater Barn that they are running this year’s offering for three weekends instead of the usual two. A Murder is Announced offers lots of familiar faces on stage and familiar names in the program at the cheerful, no-frills family run theatre in New Lebanon, NY. John Trainor is once again wearing the trench coat as a Christie sleuth, Joan Coombs is dithering, Meg Dooley is playing the highly strung mistress of the house where the murders (yes, there are two) take place, Abe Phelps has designed a handsome set which is well lit by his son Allen Phelps, and a supporting cast of talented young actors struts their stuff.

A Murder is Announced is a 1977 stage adaption by Leslie Darbon of Dame Agatha Christie’s 1950 novel of the same title, which was her fiftieth published book. The novel was very well received and is considered classic Christie, so it is interesting that Dame Agatha didn’t dramatize it herself. If she had, I suspect we would have ended up with a smoother, funnier, less fraught work than director Aaron Holbritter has to work with here.

In a large country house called Little Paddocks in the small English village of Chipping Cleghorn, Miss Blacklock (Dooley) is minding her manners and presiding over her hodge-podge household of friends and relations with the questionable assistance of her lone servant Mitzi (Shannon Paul), a loquacious and excitable Russian. It is Friday, October 13, and uppermost on Miss Blacklock’s mind is the celebration of her dear friend Miss Bunner’s (Coombs), aka Bunny, birthday. Bunny has been Miss Blacklock’s companion ever since the latter returned from a long stay abroad nursing her late sister through a losing battle with tuberculosis. But the day-to-day concerns take a back seat when a notice in the personals column of the local Gazette announces a murder will take place at Little Paddocks at 6:30 that evening.

And, of course, it does. With Miss Blacklock, Bunny, Miss Blacklock’s visiting cousins, brother and sister Patrick (Noah Mefford) and Julia (Alyssa H. Chase) Simmons, a boarder Mrs. Philippa Haymes (Clara Childress), and nosy neighbor Mrs. Swettenham (Nancy Hammell), her nebbishy son Edmond (Caleb John Cushing), and, of course, Miss Marple (Rie Lee) in attendance. (Mitzi claims she was locked in the dining room when the shots rang out.) Next thing we know Inspector Craddock (Trainor) and local policeman Mellars (Levi Squier) are on the scene asking questions and taking notes. The corpse (also played by Squier) is identified as one Rudi Scherz, a hotelier who Miss Blacklock knew briefly in Switzerland. Why was he here? How did he come to die? Who was he trying to kill and why? Everyone is a suspect and everyone has waaaay to long of a story about why it wasn’t, it couldn’t have been, them.

Red herrings fly about over the course of six scenes, during which a second murder, this time by poison, occurs. In the end Miss Marple wraps up the mystery and tea is served. Of course.

The mystery I am left to solve as a theatre critic is how so many talented people, and people well versed in staging and performing in this particular type of drama, have created such a slow-paced and wobbly production. Only Trainor and Paul seem to know what they’re about on the stage. In fact Paul’s performance is so forthright and commanding that I got excited every time she walked on stage. “Oh good,” I thought, “Now something is going it happen!”

Yes, this is a cerebral mystery. It is talky and you must listen carefully to each character’s story and the clues they so carefully place, so the actors must speak slowly and clearly. There must be a sense of repressed secrets and heighten tension as each individual comes under suspicion, and yes, these people are, with the exception of Mitzi, very, very mid-20th century British. But that doesn’t mean they are inert. Holbritter has performed several times at The Theater Barn, and while this is his directorial debut here, he has a solid track record as a director at other Capital District theatres. But his direction here is glacially static.

Having seen the younger members of this cast – Mefford, Chase, Childress and Cushing – in the Barn’s raucous opening farce Moon Over Buffalo two weeks ago, I know the energy and physical humor they are capable of, so it is sad to see them so severely restrained here. But they all disport themselves well, despite wildly disparate and fluctuating attempts at British accents. They would do well to follow Trainor’s lead and simply not attempt any accent at all.

But to me the weakest links in this cast were Dooley and Lee, who often seemed unsure of their lines and spoke too softly. Someday I would like to see Coombs take a shot at Miss Marple, as I feel she would have the backbone and subtle humor to do something special with the role. Lee is spry and twinkly, but she never fully inhabits the role. Dooley looks marvelous in flattering costumes by Shimra Jamie Fine topped by her glorious flaming red hair, but her seeming insecurity in this central role was the main cause of the production’s over-arching sense of instability.

Hopefully during its three week run the production will gel and the cast will settle in to their roles. There is a huge audience for a good whodunit on a hot summer’s night, and those of you not tasked with analyzing and writing about this production will undoubtedly enjoy yourselves thoroughly. There are plenty of twists and turns to keep you guessing right up until Miss Marple does her magic in the final scene.