Burns and Cane on “Bells are Ringing,” a musical from the Berkshire Theatre Group at Colonial Theatre 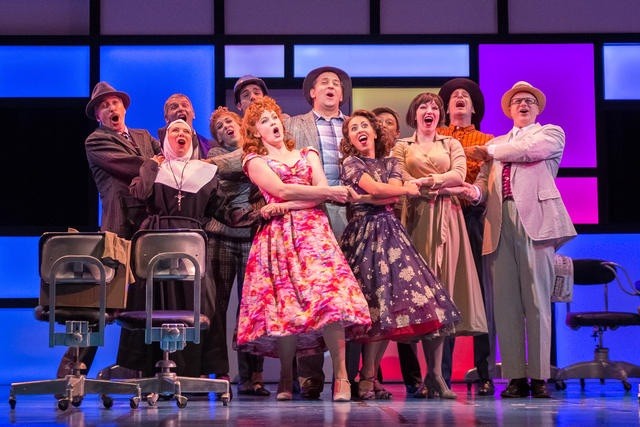 Burns and Cane on “Bells are Ringing,” a musical from the Berkshire Theatre Group at Colonial Theatre

Roseann Cane: Bells are Ringing opened on Broadway in 1956 – the same year that Candide, The Most Happy Fella, and My Fair Lady premiered (Oh, to have a time machine!) – and ran for 924 performances With a book and lyrics by Comden and Green, music by Jule Styne, and choreography by Jerome Robbins and Bob Fosse, what a pedigree it boasts. Its star, the magnificent Judy Holliday, won a Tony for her performance, as did her costar Sydney Chaplin.

Gail M. Burns: This is certainly a musical of its era, right down to the setting at a telephone answering service. For the young and unenlightened, back in prehistoric times when phones had rotary dials and plugged into the wall, if you weren’t home when a call came in, you missed it. Or if you were on the phone and another call came in, the caller got a busy signal. There was no way to leave a message. This was a problem, especially for the rich and famous, so the answering service was invented. Your number rang at a central switchboard where an actual human (invariably a woman) answered it and wrote down (with a pen on a piece of paper) your message. Then you called in, were read your messages, and you could return the calls, or receive important pieces of news, like “you got the job!” or “your uncle died.”

Judy Holliday’s first job was as an assistant switchboard operator at Orson Welles’ Mercury Theatre in the 1930’s, and in 1956 a woman named Mary Printz opened Belles Celebrity Answering Service in New York. (Astoundingly, in this electronic age, the agency is still in business!) Comden and Green were clients of Printz’s and long-time friends and theatre colleagues of Holliday’s, who by this point had won an Oscar to go with her Tony. They created Bells Are Ringing and the leading role of Ella Peterson for her.

Roseann: Which explains why this charming and paper-thin story, about a switchboard operator for an answering-service who falls in love with a client she has never seen, is more of a star vehicle and musical showcase than the more complexly plotted aforementioned shows, but so what?

Well, maybe there is a “so what.” I cannot imagine anybody calling Candide or The Most Happy Fella or My Fair Lady dated, though each show is firmly set in a particular place and time, as they must be. All of those shows were derived from literary works, and offer an examination of the human condition, presenting questions about status and class and culture. New York revivals of Bells Are Ringing in 2001 and 2010 were given the cold shoulder by critics, who found the show irreparably dated.

Gail: This show is absolutely dependent on its leading lady, and the revivals you refer to starred Faith Prince and Kelli O’Hara. But this is not a big Broadway show with millions of investor dollars riding on it and the need for it to run for years in order to recoup that investment. This is a regional theatre production which will run for three weeks no matter what. And in the lead roles we have Kate Baldwin and her husband Graham Rowat, who own a home in the area and have been regulars on area stages for many years. Its aim is to entertain, and for Baldwin and Rowat it is a welcome chance to work together in the same state at the same time (something all too rare for performing couples) while enjoying their Berkshire home. It’s a win/win situation for everyone.

Roseann: I still think this confection has the potential to entertain and delight, but this production missed the mark.

Kate Baldwin is stunningly gifted actor and singer, but as Ella Peterson, she lacked the unbridled silliness that this role demands. I loved listening to her, but she did not come from the same world as most of her supporting cast mates, including Walter Hudson as con artist-bookie Sandor Prantz; James Ludwig as Dr. Kitchell, a compulsive composer who never really wanted to be a dentist; Greg Roderick as misguided Inspector Barnes. We need to believe in Ella’s transformative powers, but Baldwin was steadily earthbound.

Gail: Baldwin was working VERY hard to nail the Ditzy Broad style that this role requires. Remember that in 1956 two of the top rated TV comedies were I Love Lucy and The Burns and Allen Show, and both were nearing the end of their runs. Lucille Ball and Gracie Allen had made Ditzy Broads big business, and Judy Holliday was the heir apparent. But the twist here is that the character of Ella Peterson is an intelligent, single, independent working woman. She is kind, funny, creative, and very successful in all she does, even if the ways she goes about doing it fit the stereotypical “ditzy” mold. That she is seeking love and companionship is perfectly understandable – we all want that – but she is no damsel in distress. She is the one doing the rescuing. Catching this variation on the bubble-headed broad is tricky, and it is where I think Baldwin and director Ethan Heard have failed Ella.

Roseann: That her costumes by David Murin were gorgeous also hindered her characterization. With the exception of a ball gown that was given to her as a gift, how can we buy that this switchboard operator who shops at Klein’s could afford to dress herself so beautifully?

Gail: In her flaming red wig and 1950’s style dresses, Baldwin is a passable Lucy Look-alike – and Rowat makes a handsome Desi Clone in his period tux in Act II. I even caught those real-life love vibes that Desi and Lucy used to share during their big dance number, “Just In Time.” Totally charming.

Roseann: As troubled writer (and Ella’s love interest), Jeffrey Moss, Graham Rowat has a spectacular singing voice, but his performance was lackluster. Rowat is an accomplished performer and a handsome man, but he seemed to me miscast as Jeffrey, lacking the youthful lightheartedness and easy charm crucial to the role.

Gail: Neither Ella nor Jeffrey is intended to be 20-something. Holliday was 34 when she played the role. Her Broadway Jeffrey, Sidney Chaplin, was five years her junior, but Dean Martin, four years her senior, played opposite her in the film. To me Baldwin and Rowat are exactly the right age for their characters, which makes their romance that much more delightful. They are both adults who have been alone too long and are ready to settle down together.

Roseann: In his press notes, Director Ethan Heard writes, “In designing the show we tried to find fun and fresh ways to distill the show to its essence. A plethora of windows and doors to represent New York. Our production will be a vibrant, brassy, saturated, sexy, hilarious, wacky, wholesome Bells are Ringing.”

Gail: I just loved the set and thought it accomplished everything Heard and set designer Reid Thompson set out to do. It captured that mid-century modern look while being both fun and functional. And Oliver Wason’s innovative lighting design was the perfect complement. This is the first time I’ve seen a production where the lighting designer got his own “number” while the orchestra played the Entr’acte at the top of Act II. It was mesmerizing and kitschy. I loved how Wason used silhouettes to represent Ella’s answering service clients before she met them in person.

Roseann: I wish I could agree with you. To me the Mondrianesque set did not suggest doors and windows representative to New York. It did provide a splendid light show. It also diminished the actors, and with set changes suggested by pedestrian-looking rolling boards with posters on them the actors seem confined.

And as a member of the audience, I too felt confined. Bells are Ringing‘s leaden pacing effectively transfigured a delectable confection into a stale fruitcake.

Gail: Heard has made no cuts that I could detect, so this production does clock in at close to three hours – typical for a 1950s musical comedy – but I was never bored. There are musical treasures, including my favorite number “The Party’s Over,” along with mainstream hits like “Just in Time,” and fun ensemble numbers like “Mu-Cha-Cha and Hello, Hello There.” And I loved how Heard took a very small ensemble cast – only Baldwin and Rowat play just one role a piece – and made them sound and feel like all of New York City. Andrew Cristi really caught my eye in his multiple turns.

I was struck by the word “wholesome” in Heard’s description of his goals for this production. This is 1950’s fun in the vein of I Love Lucy – broad comedy for the whole family with wonderful music, a snazzy set, and a charming romance between two mature adults. Pittsfield is blessed to have the BTG step in as Barrington Stage closes their big musical to provide another opportunity for us to enjoy a fine example of this most quintessentially American of art forms.