Review: This hilarious “Comedy of Errors” just happens to be set on the Jersey Shore 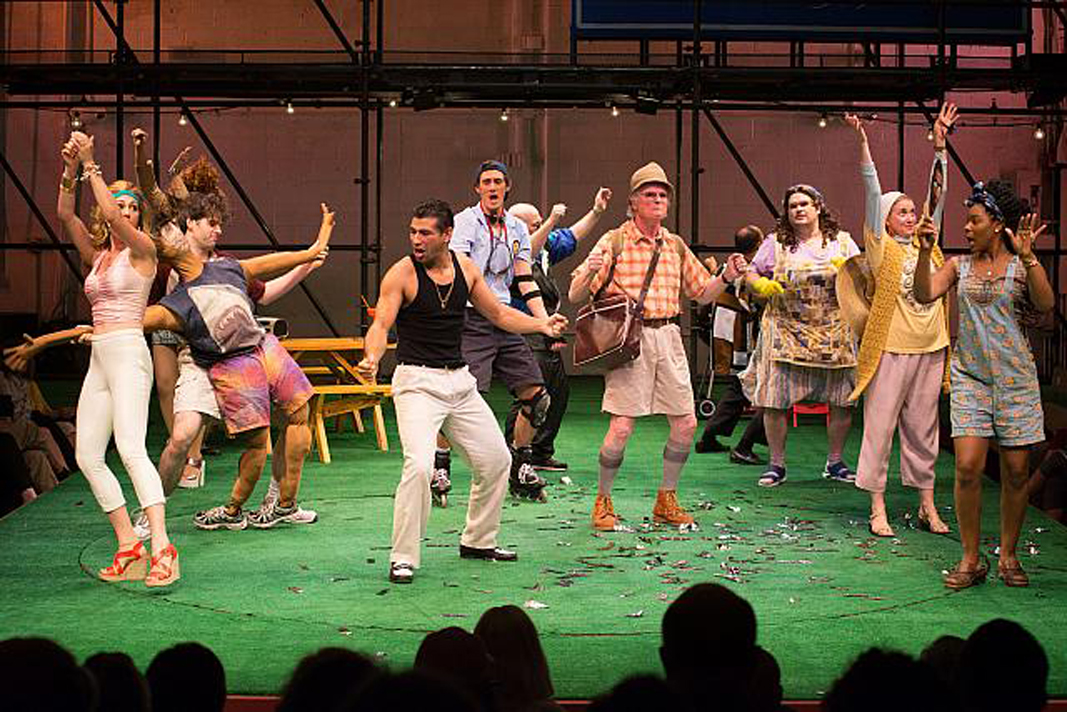 Review: This hilarious “Comedy of Errors” just happens to be set on the Jersey Shore

(l to r) Kelley Curran as Adriana and Cloteal L. Horne as Luciana.

(l to r) Ian Lassiter as Antipholus of Syracuse, Aaron Bartz as Dromio of Syracuse.

(l to r) Ian Lassiter as Antipholus of Ephesus and Michael F. Toomey as Angelo.

Aaron Bartz as Dromio of Ephesus.

Jenelle Chu as the Courtesan.

(l to r) Ben Chase as the Officer, Ian Lassiter as Antipholus of Ephesus and Michael F. Toomey as Angelo.

Aaron Bartz as Dromio of Ephesus.

Ian Lassiter as Antipholus of Syracuse and Kelley Curran as Adriana.

The Comedy of Errors gets a modern makeover, and it’s hilarious
Theatre Review by Gail M. Burns

Yesterday, as I was writing my review of The Unexpected Man [link], a little voice in my head said, “You should wait until after you see The Comedy of Errors to write this.” But speed is everything in these days of instant electronic communication, and I chose to meet my deadline rather than to wait until I had a broader base of information. Now I regret it.

Rick Dildine was the Executive Director of Shakespeare & Company for about six controversial months in 2014-2015, and both this big, bold, energetic production and the tiny fragile staging of Unexpected Man are the result of invitations he issued to directors new to the Berkshires. The two shows share the space in the Tina Packer Playhouse, where Comedy of Errors practically bursts the seams of the former Quonset hut, and The Unexpected Man seems to barely leave a footprint as it tip-toes through. Looking at The Unexpected Man alone, it appeared that Dildine had little sense of what the space was for or about. Assessing the two shows together, a broader and more coherent plan for the season emerges.

And I am actually the only member of the press to see The Unexpected Man first and The Comedy of Errors second. The Shakespeare comedy opened two weeks ahead of the Yasmina Reza one-act, but health issues delayed my opportunity to see the former. Dildine’s choice of the young Taibi Magar, a recently minted MFA from Brown University-Trinty Rep directing program, was genius and right in step with Tina Packer’s tradition of hiring innovative female directors with a genuine love and respect for the Bard. She in turn has cast from both inside and from outside the Shakespeare & Company stable of performers, and while it is painful to long-time fans of the Company to see comic geniuses like Josh Aaron McCabe and Michael F. Toomey relegated to minor roles, the newcomers Magar has hired are excellent and blend well with Company regulars like Cloteal L. Horne and Douglas Seldin.

Magar has set The Comedy of Errors on the modern day Jersey Shore – the Reality TV version, not the real reality – and the action cranks up as soon as the house opens with cast members tossing around a football and chatting up audience members while a boom box blasts. It is hard to tell where Magar’s stage direction ends and Jesse Perez’s work as choreographer and movement director begins, so seamlessly do they overlap. Set designer John McDermott, who also designed The Unexpected Man, has covered the stage of the Packer Playhouse with vividly green astroturf and left the playing area virtually bare save for a picnic table and barbecue grill upstage. Costume designer Tilly Grimes has the women all wedged into spandex and teetering on impossibly high wedge-heeled sandals, Antipolus and Dromio of Syracuse arrive in Ephesus on a bright yellow bicycle-built-for-two, and Ben Chase as the Officer spends the entire show on roller-blades. Stow Nelson’s sound design and Michael Miller’s lights are high-tech disco all the way. There is no intermission and none is needed in this non-stop laugh riot. The script, already Shakespeare’s shortest, has been pared down to under two hours.

I am sure there are Shakespearean purists writhing in agony reading the above description, and there always will be, but for the now not so young generation raised on Joe Papp-style Shakespeare – urban, diverse, and accessible – such productions are the norm rather than the aberration. This is actually the second modern idiom version of The Comedy of Errors with music that I have seen and enjoyed, the first being The Bomb-itty of Errors which I saw in its original off-Broadway run in 2000. This play, which is merely Shakepeare’s 16th century update of ancient Roman farce, lends itself well to fresh adaptations that reach out to young audiences and comedy aficionados of all ages.

Magar’s biggest innovation is having the two sets of twins – Antipholus of Ephesus and Antipholus of Syracuse, and Dromio of Ephesus and Dromio of Syracuse – played by just two actors, one for each set of twins. And thanks to the talents of Ian Lassiter as the Antipholuses and Aaron Bartz as the Dromios, they looked about as much alike, and unlike, as any set of four actors I have seen tackle the roles. How Magar manages the final scene when the twins meet and all is resolved is a secret my colleagues have not revealed and which I was glad to discover for myself in the theatre. Suffice it to say it is as innovative and funny as the rest of the production.

In Magar’s version, the center of the comedic votex is Adriana (Kelley Curran) the deeply confused and long-suffering wife of Antipholus of Ephesus. Curran, marking her second season in Lenox, has a hefty resume of Shakespearean roles and has said in interviews that Adriana was not a role on her bucket list but that now that she is doing it she is very much enamored of this feisty lady who is doggedly loyal to her irascible and slightly-wayward husband.

In the fairly minor role of the Courtesan, Jenelle Chu comes across as a similarly strong and appealing woman, while Grimes’ inexplicably dreary costume for Home detracts from the power of her Luciana. The question of the empowerment/objectification of women based on the clothing they choose to wear is a tricky one, much in the news, but actresses don’t choose their outfits and so I am not sure why Grimes has decided that virtuous equals frumpy while outspoken equals half-naked. In any event, Home’s Luciana does not look comfortable in her clothes – flats and an short-alls – while Adriana and the Courtesan look perfectly at home in their skin-tight, high-heeled glory.

There is a fourth female role, that of Luce, the kitchen wench and the wife of Dromio of Ephesus, which here is embodied by Seldin in drag. Damn, he’s funny! With almost no spoken lines he is just a miracle of motion and had me in stitches throughout. His performance makes Dromio of Syracuse’s set of gags describing Luce, to whose unwanted wifely advances he has been subjected, even more hysterical.

(Video of Aaron Bartz talking about the production)

Yes, company stalwarts McCabe, as a marble-mouthed Duke Solinus and the schlumpy Dr. Pinch, and Malcolm Ingram, as Egeon, the doddering father of the two sets of twins, are utterly wasted, but it’s good to see them nonetheless. As the goldsmith, Angelo, Toomey gets more stage time and has also choreographed the very energetic and funny fight scenes, so his talents are put to better use. Chase, well, chases other members of the cast vigorously about the Playhouse on roller-blades and neither audience nor actors seem to be injured or dead yet, which proves his skill. Sadly, the theatre is too small for him to get up enough speed to be exciting, but watching his take tight corners and handles stairs is a blast.

And Magar does use that revolve that whose cost I complained about in my review of The Unexpected Man, but it was clearly installed to add action to the Reza play, this cast and director makes the floor, walls, and ceiling pulse with energy without any gears and gadgets!

The Comedy of Errors truly is Shakespeare for the whole family. This is the kind of action-packed, colorful introduction to the Bard that can make life-long converts of youngsters. Magar has said that her personal aesthetic is more suited to the grand tragedy of King Lear than to the knock-about comedy which she seems to craft so effortlessly here. I would love to see her come back to Lenox in future seasons and stage a larger, more serious work from the Shakespearean canon. She is clearly a director to watch.